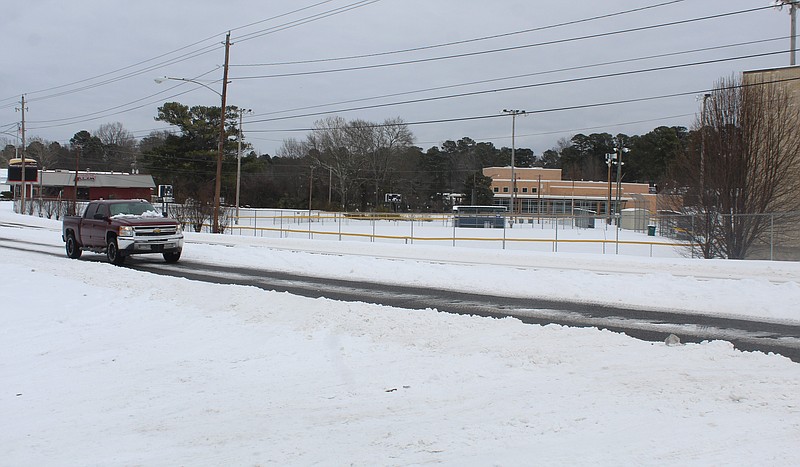 West Avenue’s two lanes were clear of snow and light traffic could be seen slowly traversing it on Feb. 19. City work crews have been catching up and cleaning up behind the snow since the winter weather cleared up last week. (Matt Hutcheson/News-Times)

Winter storms that rumbled through the area the week of Valentine’s Day kept city crews busy in all corners of El Dorado, with work tending to weather-related issues continuing this week.

During the first official meeting of the El Dorado Water and Public Works Board on Feb. 24, city department heads and supervisors discussed with the El Dorado City Council how their respective departments dealt with issues that cropped up during a rare south Arkansas winter-weather event that blanketed the area in snow, ice and sub-freezing temperatures for several days.

Snow and ice thawed out last week as temperatures began to rise into the high 60s.

The city council formed the new EWPWB during a specially-called meeting Feb. 3 to keep abreast of projects and issues within an expansive network of operations that fall under the Department of Public Works’ umbrella, including streets, sanitation, code enforcement, parks and playgrounds and the El Dorado Water Utilities.

On Feb. 24, John Peppers, general manager of the EWU, told council members that the EWU tended to several water main breaks and heard reports from residents whose water pipes had burst in frigid temperatures that dropped into single digits at times.

Robert Edmonds, director of public works, said water leaks sprouted up at mains near the Delek-Lion Oil refinery, in downtown El Dorado, on Sunset Road and on Champagnolle Road near the Union County Shop, just past the El Dorado-Union County Recreation Complex and few other areas around town.

“The ground freezes and moves, thaws out and shifts again and old pipes don’t like that. In the summertime, when there are drought conditions and the ground cracks open, that also gives us problems,” Edmonds said.

He added that EWU crews promptly responded to calls about water main breaks, saying, “They jumped right on it.”

Peppers also said water-usage numbers spiked during the deep freeze as a result of spillage from the main breaks, customers leaving their faucets dripping to help prevent their water pipes from freezing and water leaks from frozen pipes that burst at homes within the EWU coverage area, which extends five miles beyond city limits.

He reported that the numbers climbed to nine million gallons Feb. 21, nearly quadrupling the same-day total of nearly three million in 2020.

“I can’t even remember nine million in a day — not even when (Pilgrim’s Pride) was here,” Peppers said, referring to the former poultry processing plant that shut down major operations in El Dorado in 2009 and was the EWU’s largest customer at the time.

“You would think that it’s higher in the summer when it’s hot but it’s in the winter when people leave their faucets dripping to keep them from freezing,” he said.

Several inches of rain and wintry precipitation that have landed at each of the city’s two wastewater treatment plants over the past several days — more than five inches at the north plant and over 6 inches at the south plant — have boosted the amount of effluent that is typically treated at the plants to above-average levels, Peppers said.

Edmonds said the additional load is part of efforts to deal with ongoing infiltration problems for the city’s aging wastewater treatment system.

Engineering work is under way to develop designs and plans to replace the WWTPs, both of which were built in the 1970s and are deteriorating beyond repair, and to explore funding options to cover the multi-million-dollar project.

City sanitation supervisor Anthony Traylor reported that crews are working to catch up with the curbside garbage collection schedule, which was delayed for nearly two weeks because of the inclement weather.

By Feb. 16, the schedule was already a day behind because city employees were off work and city offices were closed the previous day for Presidents’ Day.

Traylor said sanitation crews have been using an extra rear-loader garbage truck in addition to the regular side-arm loaders — the city rotates its three side-arm trucks to run collection routes — to get a handle on the backup.

“Each truck has been hauling an average of eight to 11 tons and lately, we’ve been making two trips a day to the (Union County Landfill). We try to make it there by (4:30 p.m.) before they close,” he said, adding that work was expected to continue through the weekend.

Council Member Judy said she witnessed workers with two garbage trucks collecting solid waste on a single city street while out and about on Feb. 23.

The program averages five to six bales recyclable materials for processing each day of operation and seven to eight bales on Mondays, he told council members.

The center is closed on Sunday.

Cardboard, newspaper and magazine print, plastic bottles — with the tops removed —, electronic waste (old TVs, computers, printers, stereos, etc.) and vehicle tires are some of the items that are accepted at the city’s drop-off center, which is located at 401 W. Liberty.

Recyclable materials may also be taken to the city’s recycling plant at 1600 S. Jackson Ave.

“We didn’t have much damage in the parks from the snow. It was mostly people riding four-wheelers in the parks,” Lewis said, adding that the ATV activity left ruts in the grass at several city parks.

He said crews are working to add more mulch to the playground areas to improve safety in city parks.

Council Member Willie McGhee asked if wildlife game and trail cameras could be installed in city parks to surveil the areas and help prevent vandalism and other illegal activities.

“Before, there were issues with no Wi-Fi in the parks and we need to figure out how to position them to get them to work better and we’ve got to get them high enough so people can’t get to them,” Lewis said.