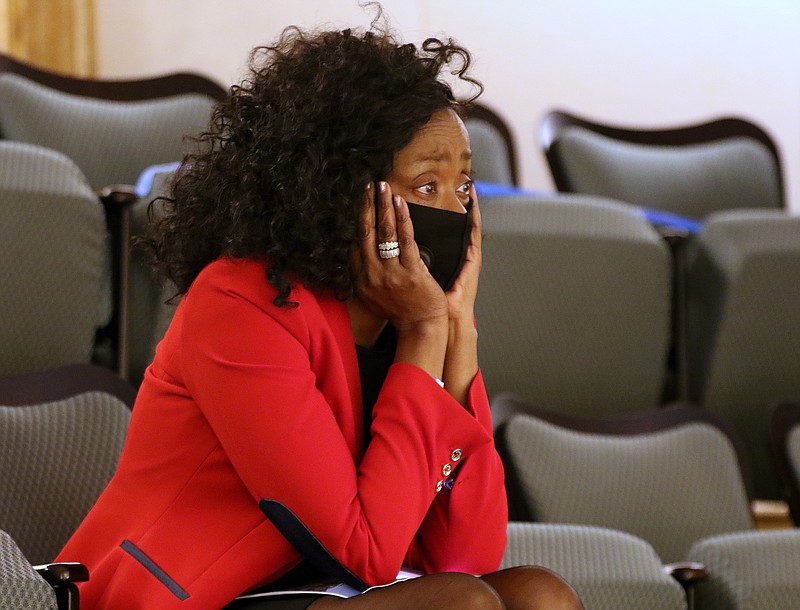 Dr. Charity Smith of Little Rock reacts as she watches the vote count while sitting in the gallery after SB-24, the “Stand Your Ground bill” was voted on during the House session on Wednesday, Feb. 24, 2021, at the State Capitol in Little Rock. “This is devastating,” said Smith. (Arkansas Democrat-Gazette/Thomas Methe)

The House voted along mostly partisan lines Wednesday to send a controversial “stand-your-ground” bill to Gov. Asa Hutchinson, who has in the past expressed reservations about such legislation.

Hutchinson did not say Wednesday whether he would sign Senate Bill 24, which removes the duty to retreat from Arkansas’ self-defense laws.

The governor could sign the bill or allow it to become law without his signature. If he chooses to veto the bill, the Legislature could vote to override the veto with a simple majority in both chambers. The House voted 72-23 in favor of the bill Wednesday, following a similarly lopsided vote in the Senate.

“Stand your ground legislation passed by wide margins in both the House and Senate after considerable debate and testimony,” Hutchinson said in a statement released by his spokeswoman after the vote. “I will take the weekend to review the testimony and debate and make a decision on the bill next week.” Opponents of stand-your-ground laws point to increases in gun deaths and shootings in states that have passed similar legislation and argue that the laws encourage vigilantes who often target members of minority groups. Supporters of the laws say they help reduce violent crime.

An effort to pass a stand-your-ground bill in Arkansas in 2019 failed amid opposition from prosecutors and law enforcement authorities. However, the sponsors of SB24 worked with both groups and included language to get them to remain neutral on the bill.

Speaking to reporters during that past attempt, Hutchinson said, “I think our current law is strong, in terms of allowing self-defense and protection. And we will continue to see if there’s a case made that it should be changed. But I’m hesitant to change from what we have right now that I think works very well in Arkansas,” according to the TV station KATV.

The sponsor of SB24, state Rep. Aaron Pilkington, R-Clarksville, defended the bill Wednesday from attacks labeling it a “license to kill.” “The truth is we are slightly moving the needle here in Arkansas to allow Arkansans to defend themselves when they find themselves in situations where they need to use lethal force,” Pilkington said.

Under current law, people are generally required to retreat before using lethal force in self-defense unless they cannot do so “in complete safety” or they are at their homes. SB24 removed that duty for most places where a person is “lawfully present.” Similar legislation was passed in Florida in 2005 and subsequently in about 24 other states, according to the National Conference of State Legislatures.

Florida’s law has come under increasing scrutiny, however, after the 2012 shooting of Trayvon Martin, an unarmed Black teenager who was killed by a local neighborhood watch volunteer. (The shooter, George Zimmerman, did not claim a stand-your-ground defense at trial, but jurors considered the law before voting to acquit him.) Lawmakers who spoke against SB24 Wednesday pointed to the Martin case and last year’s deadly shooting of Ahmaud Arbery, who was chased and killed by two men who claimed they acted in self-defense under Georgia’s stand-your-ground law, and who now face charges of murder.

“I happen to have a 12-year-old Black son who I’m concerned about if this bill passes, who could have been Trayvon Martin,” said state Rep. Monte Hodges, D-Osceola.

“It may well be that on the back end, prosecutors and law enforcement will be able to hold murderers like that to account,” Clowney said. “But that doesn’t bring Ahmaud Arbery back.” In a statement released after Wednesday’s vote, the Arkansas chapter of Moms Demand Action for Gun Sense in America released a statement calling on Hutchinson to veto the bill.

“Arkansans from all walks of life agree: ‘Stand Your Ground’ will only add confusion to our self-defense laws and increase gun violence in our state,” said Amy Gillespie, a volunteer with the group.

Before Wednesday’s vote, SB24 had also faced some opposition from gun owners who argued that the bill would not allow them to use their weapons in self-defense in places where guns are restricted.

An amendment to the bill presented Tuesday by Pilkington would have allowed someone illegally carrying a firearm in a gun-free zone to use it and claim a stand-your-ground defense as long as he was not already committing a more serious felony.

The amendment, however, drew objections from prosecutors who threatened to revoke their neutral stance on the bill, and it was voted down in the House Judiciary Committee. Republicans on the committee then proceeded to pass the original bill.

“We didn’t make and take a good bill and make it better, but it’s still a good bill,” said state Rep. Marcus Richmond, R-Gravelly, a supporter of the amendment who nonetheless urged colleagues to support SB24 Wednesday.

During the floor vote, only three Republicans joined Democrats in voting against the bill. They were Reps. Gayla McKenzie of Sulphur Springs, Josh Miller of Heber Springs and Joe Jett of Success. One lawmaker, Rep. David Tollett, R-Lexa, voted “present” on the bill.