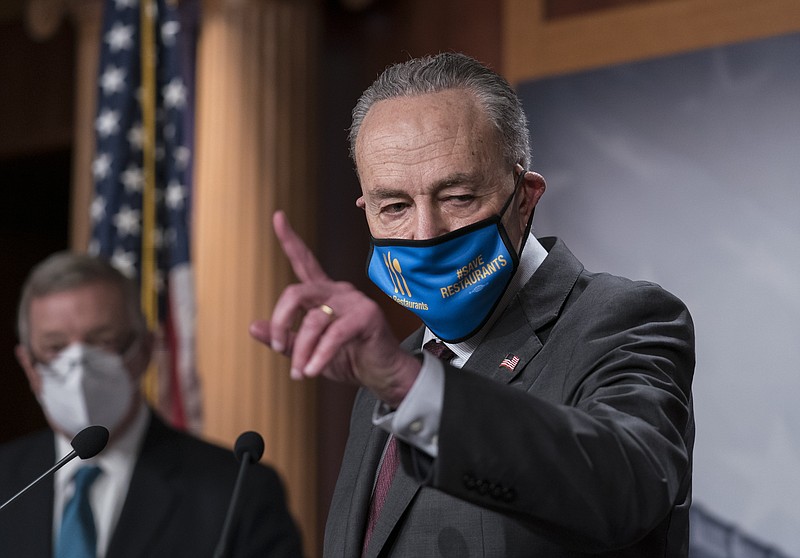 WASHINGTON (AP) — The White House seemed reluctant Thursday to pursue a Senate procedural power play to preserve Democrats’ bid to hike the minimum wage, as lawmakers awaited a decision by the chamber’s parliamentarian that could determine the proposal’s fate.

Democrats were on track to push a sprawling COVID-19 relief measure through the House on Friday, an initial version of a $1.9 trillion package that includes a minimum wage increase. They’re hoping Congress can send President Joe Biden a final version of the bill by mid-March.

The overall relief bill is Biden’s first legislative priority. It is aimed at combatting a year-old pandemic that’s stalled much of the economy, killed half a million Americans and reshaped the daily lives of virtually everyone.

But first, Senate parliamentarian Elizabeth MacDonough was expected at any time to reveal whether that chamber’s rules would allow the minimum wage provision to remain in that bill. If she decides language raising the minimum to $15 hourly by 2025 must be dropped, it could all but kill the increase’s chances of survival for now.

While Biden supports the increase to $15, the White House seemed to signal reluctance to pursue one rarely used option.

Democrats could bust through decades of Senate precedent, ignore the parliamentarian’s view and keep the minimum wage provision in the bill with their 51 votes. But moves like that are anathema to many Senate traditionalists like Biden, a 36-year veteran of the chamber, and would invite tit-for-tat retaliation by Republicans.

“It would be a serious step for the vice president to take that step,” White House press secretary Jen Psaki said of Kamala Harris, who likely would preside over the Senate at that critical moment. “And obviously, she and the president respect the historic institution of the Senate. It would also require 50 votes.”

Democratic Sens. Joe Manchin of West Virginia and Kyrsten Sinema of Arizona have voiced opposition to including the $15 minimum wage in the relief bill and other moderates have expressed concerns too, making it unclear that Democrats could rally the support they’d need to prevail. They control the Senate with Harris’ tie-breaking vote.

“Certainly, that’s not something we would do,” he told MSNBC host Joy Reid. “We’re going to honor the rules of the Senate and work within that system to get this bill passed.”

Republicans solidly oppose the $15 minimum wage target as an expense that would hurt businesses and cost jobs. They also oppose the overall relief bill, saying it’s too expensive, not targeted enough at people and businesses that most need it and a grab bag of gifts for Democratic allies.

If MacDonough decides the minimum wage provision can remain in the bill, it would be a major boost for its proponents. But there would still be no guarantee the measure would survive because of opposition from some Democrats, suggesting that grueling bargaining on its final form would lie ahead.

Every Democrat would have enormous leverage in such talks, because the party has just a 10-vote edge in the House and no votes to spare in the 50-50 Senate.

It is unclear what such negotiations would produce. Democrats have discussed options including taking additional years to reach $15, lowering the dollar target, phasing the increase in by region of the country and letting the new figure grow automatically under some formula.

Rep. Scott Peters, D-Calif., was among several Democrats who’ve expressed support for creating a way for the minimum wage to automatically keep abreast of inflation and pay scales. He added, “I’m not religious or doctrinaire about how to do it.”

The pandemic relief legislation would provide millions of people with $1,400 direct payments. It contains billions of dollars for vaccines and COVID-19 testing, schools, state and local governments, the ailing restaurant and airline industries and emergency jobless benefits while providing tax breaks to lower earners and families with children.

Democrats are pushing the $1.9 trillion measure through Congress under special rules that will let them avoid a Senate filibuster by Republicans, a tactic that Democrats would need an unattainable 60 votes to defeat.

But those same Senate rules prohibit provisions with only an “incidental” impact on the federal budget because they are chiefly driven by other policy purposes. The parliamentarian decides if provisions pass that test.