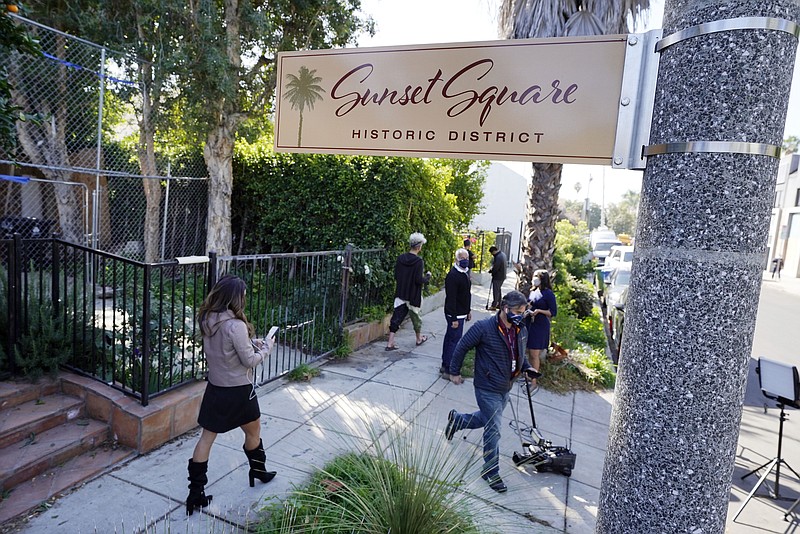 Members of the media and neighbors walk near an area on North Sierra Bonita Ave. where Lady Gaga's dog walker was shot and two of her French bulldogs stolen, Thursday, Feb. 25, 2021, in Los Angeles. The dog walker was shot once Wednesday night and is expected to survive his injuries. The man was walking three of Lady Gaga's dogs at the time but one escaped. (AP Photo/Chris Pizzello)

LOS ANGELES (AP) — Lady Gaga’s dog walker was shot and two of the singer’s French bulldogs were stolen in Hollywood during an armed robbery, police said. The singer is offering a $500,000 reward.

The dog walker was shot once Wednesday night and is expected to survive his injuries, according to Los Angeles Police Capt. Jonathan Tippett, commanding officer of the department’s elite Robbery-Homicide Division. The man was walking three of Lady Gaga’s dogs at the time, but one escaped. That dog has been recovered safely.

Tippett told The Associated Press that the dogs belong to pop star Lady Gaga. It’s not yet clear if the dog walker was targeted because of his celebrity client, the captain said.

Lady Gaga is offering the reward for the return of her dogs — whose names are Koji and Gustav — with no questions asked, according to her representative. An email address for tips, KojiandGustavgmail.com, has been set up. The singer is currently in Rome to film a movie.

Police were initially called to North Sierra Bonita Avenue, a street off the famed Sunset Boulevard, around 9:40 p.m. Wednesday following several 911 calls reporting a man screaming and the sound of a gunshot, said Capt. Steven Lurie, commanding officer of the department’s Hollywood Division.

The victim, whose name has not been released, was walking the dogs when a four-door sedan pulled over and two men tried to steal the animals, Tippett said.

The dog walker tried to fight them off and was shot by one of the men wielding a semiautomatic handgun during the struggle. It’s not yet known if both men were armed.

There was little evidence of the previous night’s violence on Thursday afternoon in the upscale neighborhood known as the Sunset Square historic district. There were faint blood spatters on sidewalk grasses and an errant black glove typically used by police left in the street. Neighbors, some of whom had doorbell security cameras, declined to comment on the shooting.

Gaga has remained among the biggest pop stars in the world since breaking through with her 2008 album “The Fame,” known as much for her shape-shifting persona on stages and red carpets as for her danceable music and powerful vocal pipes.

She has won 11 Grammy Awards, headlined Super Bowl halftime and has now also become a bona fide Hollywood star after co-starring in 2018’s “A Star is Born” with Bradley Cooper and winning an Oscar.