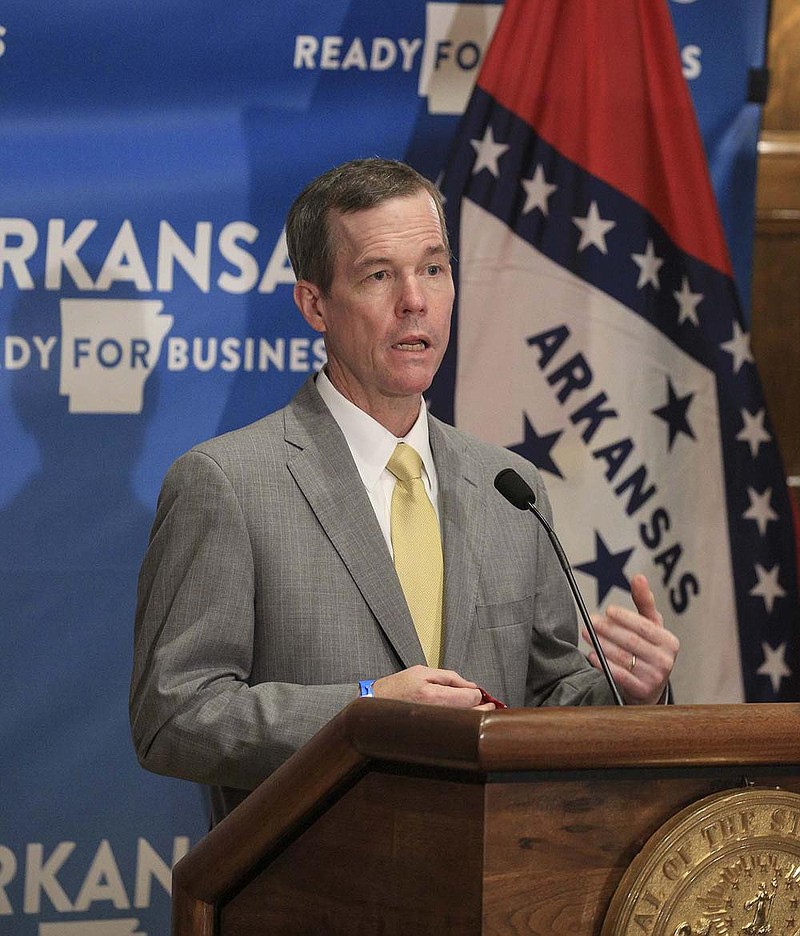 Dr. Cam Patterson, chancellor of the University of Arkansas for Medical Sciences, spoke Monday at a virtual meeting of the El Dorado Rotary Club. He was joined by Medical Center of South Arkansas Chief Executive Officer Scott Street and Amy Wenger, vice chancellor for regional programs at UAMS.

Patterson has been one of the leading figures in Arkansas’ fight against the COVID-19 pandemic; he currently serves as the resource committee chair on Gov. Asa Hutchinson’s COVID-19 Winter Task Force, and has appeared numerous times at the governor’s COVID-19 update press conferences, where he’s spoken about hospital capacity, personal protective equipment (PPE) supplies and resource management.

Before moving to Arkansas about two and a half years ago, Patterson served as the Vice President and Chief Operating Officer at the New York-Presbyterian/Weill Cornell Medical Center and Komansky Children’s Hospital in New York.

“I certainly never imagined that New York weather would follow me down here,” he joked on Monday. “I think it speaks a lot to the state of Arkansas and the people of Arkansas that we managed to deal with quite a difficult weather situation with as little damage to our health care delivery system.”

“That’s the last thing we need on top of the COVID-19 pandemic is another problem superimposed on that,” he added.

Patterson said the COVID-19 pandemic has changed the way health care providers function over the past year. It caught both health care workers and the general public by surprise, he said, and will likely change both social norms and health care delivery going forward.

“COVID-19 has caught all of us by surprise. It has changed the way that we go about providing health care and it has made us rethink many aspects of how we deliver health care now and many of the changes we’ve put in place now will carry into the future,” he said. “It was once considered an act of physical toughness to show up for work if you had a respiratory illness … Coming into work if you are ill was considered a mark of courage. Going forward, it will just seem extremely irresponsible.”

For Patterson, the pandemic has seemed to develop in five distinct phases, he said. When news of the novel coronavirus first came out, and then the first case was identified in the United States, health care and government workers alike were unsure whether infections from the virus would rise to the level of pandemic or peter out as other disease outbreaks in the past have.

“We’ve had near misses with SARS, MERS, Ebola, other infectious diseases we were concerned would establish a strong foothold in the United States. Our first phase was wondering whether COVID-19 would be similar to those diseases that we’ve seen in our lifetimes or whether it would be more similar to the Spanish influenza pandemic or the early days of HIV in the 80s and 90s,” Patterson said.

COVID-19 quickly established itself as a pandemic-level virus. The first U.S. death attributable to the virus was recorded on February 29, 2020 in Seattle, where an international airport is located, and less than two weeks later, the first case had been identified in Arkansas.

At that point, for health care providers, the question shifted to how to protect oneself and others from contracting the virus. Patterson said his focus was on PPE, of which there was a shortage at the beginning of the pandemic. He said Arkansas was able to navigate PPE challenges better than many other states because of the governor’s swift action.

“That was a nationwide challenge, certainly a challenge that affected both large and small hospitals and all health care providers in the state of Arkansas,” Patterson said. “I would say, because of some forward-thinking in the governor’s office, we were able to manage the crisis of equipment seen in some other states … mainly because he bought such equipment in bulk and the state distributed it, rather than all our hospitals competing and driving up the price.”

The next hurdle to overcome was testing Arkansans for COVID-19 infections. When the pandemic began, testing supplies were limited and Arkansas fell behind testing goals. Eventually, antigen, or rapid, tests were developed, and the ability to track the virus through mass testing has helped both health care providers and government officials in tackling the pandemic.

“It’s still probably not as widely and broadly available as we would like it to be,” Patterson said. “Eventually we’ll be able to test ourselves in the comfort of our own homes.”

Now, we’re in the fourth phase of the pandemic, Patterson said — mass vaccinations. Several factors have made vaccinating the population against the virus a challenge, including the short supply of both the Pfizer and Moderna vaccines, the only ones with Food and Drug Administration (FDA) approval so far, as well as misinformation about the vaccines.

Patterson said at least 70% of the population needs to be vaccinated against the virus for the entire population to achieve “herd immunity,” when enough people will be as close to immune to the virus as possible, lowering its spread. The challenge to getting to that point is twofold, he said.

“One is access … Many simply don’t have great access to medical resources … and so lack of access is going to be a challenge for some members of our communities, especially those in lower socioeconomic circumstances,” Patterson said. “The other is those who have access to the vaccines but won’t take it.”

Patterson said achieving herd immunity through mass vaccination of the population will start to bring the community back to a sense of normalcy — schools will be able to safely reopen, spectator sports will be able to resume and it will be safe to attend church and sing again, for just a few examples.

“Getting the word out about how important receiving the vaccine is for each of us … is a really, really critical moment,” he said.

Once the country achieves herd immunity, the fifth phase of the pandemic will start: returning to “something that approximates normal,” Patterson said. If vaccinations continue at their current pace, and Arkansans continue to embrace the vaccines, that could start as early as summer, he said.

“It’s not going to happen overnight, and there will likely be some vestiges of the things we have begun to do to protect each other, such as masking,” he said, noting that recommendations to wear face coverings could continue into 2022. “If we can get enough individuals vaccinated, especially before the more virulent strains of COVID-19 get a handle here in Arkansas … I can see some of the restrictions unwinding … in late summer, early fall.”

Patterson noted the nearing of a sad milestone of the pandemic - the 500,000th recorded death resulting from COVID-19 in the U.S., which was reached Monday afternoon.

“It’s a tragedy that touches all of us. It’s had a substantial impact on health care workers,” he said.

UAMS is continuing work to educate communities about COVID-19 and the vaccines now available for it. One Rotarian noted that COVID-19 exposure rates are higher, while vaccination rates are lower, in some minority communities, and Patterson said UAMS has several programs in place to address such discrepancies.

“We have specific programs in place, funded by the CARES Act, leading interventions in communities to increase understanding of COVID and address questions related to protecting oneself and understanding the benefits of vaccination,” Patterson said. “It’s the Spanish-speaking community that’s fallen the furthest behind (in being vaccinated). We’re partnering with some of the HBCUs (Historically Black Colleges and Universities) and other community members to help us educate communities.”

Additionally, Patterson said, UAMS mobile testing units are now beginning to be deployed as mobile vaccination units, which allows UAMS staff to provide education about the vaccines’ safety and efficacy in communities outside Little Rock.

Patterson concluded his talk to the Rotary Club with well wishes for El Dorado, where, he noted, UAMS and MCSA are partnering to revive a regional training program that he said would help to bring more family medicine providers to the area.

“While we have all dealt nobly facing COVID-19, and no one more so than our frontline providers, … we still have to go about the business of treating other health care-related issues. We still have to think about heart attacks, strokes,” he said. “I’m really proud over the past year that we at UAMS have not let COVID-19 impact our partnership with the people of El Dorado and the Medical Center. We are set to open our ninth regional training program in El Dorado … We’re looking forward to training more family medical professionals who will stay in your community.”

Wenger and Street went on to discuss the regional training program more, which will be covered in a future edition of the News-Times.

The El Dorado Rotary Club will next meet on March 8.