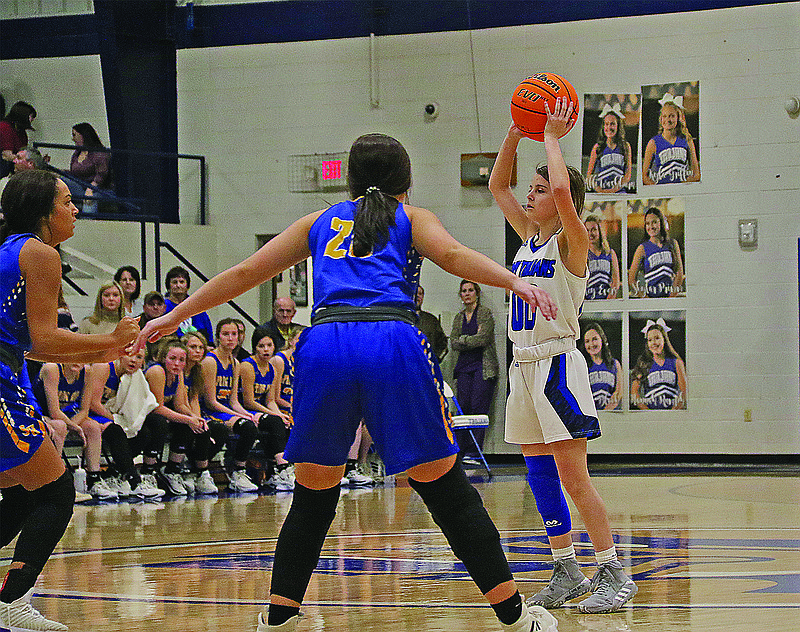 Some refer to it as a “Napoleon Complex,” when a vertically challenged individual becomes hyper aggressive. It’s a way to overcompensate for their lack of height.

Parkers Chapel’s Lexi Moss is listed as 4-feet-11-inches tall. She may or may not know who Napoleon is or if his last name is Dynamite.

Her complex on the basketball floor is defense, specifically, pestering the other team’s point guard.

“Lexi will tell you she’s five-foot. I haven’t put a measurement on them in a while. The last time I put a measurement on her it was like 4-11 … and a half,” said Parkers Chapel coach Justin Welch. “She’s very aggressive defensively. She gets after ‘em up there at the top of the key and that really helps us. It also hurts the other team as far as rhythm is concerned. They can’t get into sets because of her aggressiveness up there playing defense.”

Surrounded by scorers, Moss cracked the Lady Trojans’ starting lineup because of what she brought on the defensive end of the floor. Her height, or lack thereof, might be an advantage as she bulldogs opposing ball handlers.

“I tell her all the time, I need her to be like a little badger and just go after them, fight and claw and dive on the floor for everything,” said Welch. “That’s what she has done this year. It’s been huge for us. It definitely sets the tone for us defensively.”

The Lady Trojans claimed a share of the league title and will be a No. 2 seed in the upcoming regional tournament. A big reason for the team’s success has been defense.

“I believe my role on the team this season is to play tough and aggressive defense and to help create better offensive opportunities for the team,” said Moss.

With PC’s additions from junior high, the team has more backcourt depth, which has only heightened Moss’ feistiness since foul trouble isn’t as much of a concern.

Welch said she’s played with “moxie” this season and an attitude on defense. Call it a Napoleon Complex but it has worked for the Lady Trojans.

“Going into this season, we talked about it and I talked about how important it was that she set the tone on the defense,” said Welch. “She’s accepted that role and she’s done a fantastic job of it this year. It’s really made a big difference in our team.”