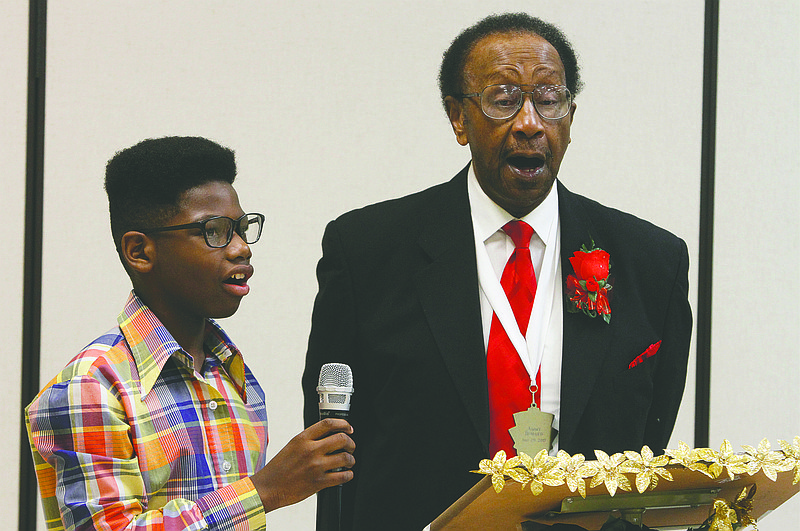 Meet Me at the Court member Carmelo Brown, left, and Deacon Jimmy Howard sing during the fifth annual Black History Person of the Year and Youth of the Year Dinner at St. Mary's Episcopal Church in this 2019 file photo.

Despite a postponement and some modifications, the show will go on for the seventh annual Black History Person and Youth of the Year presentation, which has been set for 6:30 p.m. on Friday in the El Dorado Municipal Auditorium, 100 W. Eighth.

The annual event, presented by Meet Me at the Court and The Bailey Family, celebrates Black History Month by honoring notable people, children and adults, who make an impact in El Dorado and Union County.

This year, six honorees will be recognized for their achievements and contributions to the community.

The BHP&YOTY event is typically presented banquet style, making for a full evening of activities that include dinner, entertainment, a keynote address, the recognition of honorees and more.

However, with the coronavirus (COVID-19) pandemic, organizer Veronica Bailey said the 2021 event had to be scaled back in order to comply with health and safety guidelines.

“We knew could not have the banquet due to COVID but we still wanted to have a presentation for Black History Person of the Year to show our honorees that we appreciate everything they do and are doing for the community,” Bailey said.

Bailey said she checked with Mayor Veronica Smith-Creer about booking the auditorium, which allows for social distancing and groups to host events in accordance with Arkansas Department of Health guidelines to help prevent the spread of the virus.

Once the venue was secured, the event, which had originally been scheduled for Feb. 12, hit another snag.

Winter storms pounded the area last week with a mix of wintry precipitation and bitterly cold temperatures and forced organizers to reschedule the BHP&YOTY presentation.

Smith-Creer will present awards to this year’s honorees and Jimmy Howard will recite Dr. Martin Luther King’s “I Have a Dream” speech in its entirety, Bailey said.

She emphasized that seating will be limited Friday and safety guidelines, including face masks and social distancing, will be enforced.

Honorees were selected in six categories. They are:

• Kaleb Floyd, Youth of the Year. The 6-year-old is the son of Brianna Clay and Tyrone Floyd and is a student at Yocum Primary School.

Floyd said he enjoys jumping on his trampoline, riding his hoverboard and watching videos on his cell phone.

Bailey said Floyd has been a member of Meet Me at the Court for two years.

MMC is a youth program that focuses on mentoring and building self-esteem, with an emphasis on community service.

Floyd often recites the inspirational poem, “Hey Black Child,” at various local events, including those that are hosted by MMC and The Bailey Family, Bailey said.

“Hey Black Child” was penned by author, playwright and activist Useni Eugene Perkins and was originally a song that was featured in his 1974 play “The Black Fairy.”

Since then, the poem has become a staple in African American households across the country. Perkins is also known for his work with youth.

Elerson is a retired educator who taught language arts to grades six through 11 for 34 years in the El Dorado School District.

She graduated from Walker High School in Magnolia and in 1967, she earned a B.A. in English from Arkansas Agricultural, Mechanical & Normal College, now known as the University of Arkansas at Pine Bluff.

Elerson graduated in 1969 with a Master’s degree as a reading/literacy specialist from Southern Arkansas University in Magnolia.

She teaches the Women’s Bible Class at Douglas Chapel Missionary Baptist Church, is a member of the Order of Eastern Star Pride of El Dorado, Chapter 352, and volunteers to brighten the holidays for low-income families with children.

Elerson was married to the late George F. Elerson for 34 years. She has four stepchildren, six grandchildren and four great-grandchildren.

Ford is a retired social worker who worked with the Arkansas Department of Human Services, Division of Children and Family Services, for more than 30 years.

She is a 1979 graduate of El Dorado High School. She attended SAU in Magnolia, where she earned a B.A. in Social Work, with a minor in psychology.

Ford was a family service worker with DHS, where she helped children who were abused and neglected and placed them in foster care.

In 2013, she retired from DHS after 28 years, serving the last four years as supervisor of the Ouachita County office.

A love of helping children prompted Ford to return to work for DHS in September of 2014, remaining there for nearly six more years before stepping down again in August of 2020.

Ford keeps in touch with the families with whom she has worked over the years and she continues to ensure that children are placed in loving homes as a board member of The CALL in Union County, which recruits and supports foster and adoptive families.

Ford is married to Chester Ford. The couple has two children and two grandchildren.

Stewart is a 1987 graduate of EHS, where he played linebacker for the Wildcats football team. He was a three-year letterman and earned all-state and all-conference honors.

He was also named Best Linebacker for the Wildcats in 1987.

Stewart works a machine operator for the city of El Dorado and he coaches football teams for local fifth and sixth graders.

He mentors his young charges off the football field and often makes door-to-door visits to the players’ homes “to keep them encouraged and on the right path,” Bailey said.

Stewart is the son of Joel and Effie Stewart and is married to Falisata Stewart. The couple has six children and four grandchildren.

In 2016, he received his master’s degree in Information Systems from the Sam Walton College of Business at the University of Arkansas at Fayetteville.

Williams worked in corporate America for more than a decade, joining the teams of several Fortune 500 companies, including Murphy USA in El Dorado, Tyson Foods in Springdale and JPMorgan Chase in Columbus, Ohio.

Williams also earned his real estate agent's license and is the co-owner of Empire Properties, a real estate company that specializes in providing dignified, affordable housing in Arkansas.

He bought his first rental property at the age of 23 in 2011 and his holdings have since grown to 117 houses and apartments, with a total value of $5 million with all properties collecting.

In March 2020, Williams and his business partner bought Prime Liquors, 1033 E. Hillsboro, and revenues have reportedly doubled at the business in less than a year.

Williams is also working to fulfill another community need.

Local residents have long called for a grocery store on the east side of town and Williams is answering that call with Williams Foods: Your Neighborhood Market, which is expected to open soon at 1019 E. Hillsboro.

“He said this is his most impactful business because it touched more people. He also said he does not have employees. He has what he calls his team,” said Bailey. “He values his customers and he likes to treat his customers like family and he wants to thank the community for being so supportive of him,” she continued.

Williams is the son of Joyce and Lovell Johnson. He and his fiancee, LaShanda Miles, have three children.

Davis is an El Dorado native and 1987 graduate of EHS who now lives in Atlanta, Georgia.

He worked for 23 years as a cloud engineer for IBM.

He and his wife of 20 years, Kim, are the owners of MyStiQ Entertainment, a full-service event management and production company based in Atlanta.

Davis has brought entertainment to El Dorado with comedy shows and concerts and he works with youth as the CEO of the Don’t Be a Bully Foundation.

He and his wife have organized programs that provide mentoring for local youth, including the Youth Empowerment Experience and a football camp.

Davis has also worked with Mayor Veronica Smith-Creer on community service activities, such as visiting local nursing homes and giving away toys and bicycles for the holiday season.

Bailey said she thought it was fitting to honor Davis with an award that was named after her late mother and father, who, she said, taught her the importance of giving back to the community.

“He’s just a great humanitarian. He’s from this city. He moved and lives in Atlanta but he comes from Atlanta to give back to the community,” she said. “That football camp is free. If it wasn’t, a lot of kids would not be able to attend. He’s always helping others.”

Davis is the son of Robert and Linda Neel. He and his wife have three daughters.