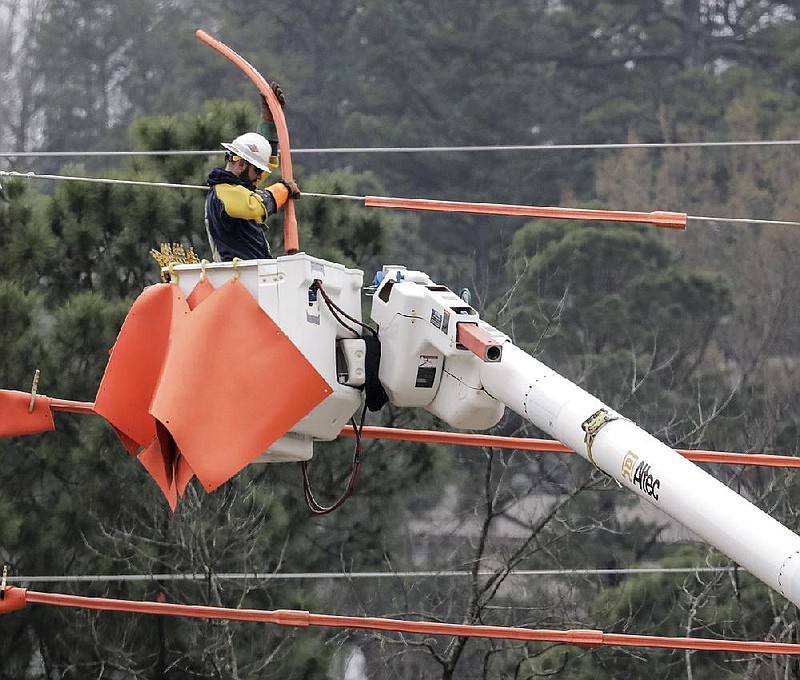 Tuesday evening, at the direction of the company’s “reliability coordinator,” Entergy Arkansas began shutting off customers’ power “as a last resort and in order to prevent more extensive, prolonged power outages that could severely affect the reliability of the power grid,” according to a press release distributed by the company.

Entergy customers in Texas, Louisiana and Mississippi were also affected by the “rolling blackouts.”

Customer service manager Chris Wasson said Tuesday evening around 8:30 that the forced interruptions were to only last half an hour for any given customer. At around 9 p.m., he said the length of the power disruptions could vary, potentially lasting “for several hours.”

By that time, Entergy Arkansas had announced on its Facebook page that the rolling blackouts were no longer necessary for the time being.

“We were given a few minutes that we had to react. We have to comply and start curtailing the load,” Wasson said. “That’s one of the reasons we were not able to give more advance notice, because it was a real-time event.”

Also known as a forced service interruption or load shedding, rolling blackouts are when an electricity provider shuts off power in a given area in order to preserve the power grid.

“You can kind of think of it like a car; if you overheat a car, it can cause internal damage to your engine. If a car gets overheated, especially newer models, it will automatically shut down, and that prevents further damage,” Wasson said. “You can imagine that engine as being the electrical grid. If we overload that grid, there will be damage to equipment, to the power lines, and then you’re talking about additional time that we’re off line having to repair all of that.”

Electricity is produced from a variety of sources — everything from natural gas and other fossil fuels to solar and wind farms considered “green energy” to nuclear power. Wasson said Entergy Arkansas has a “diverse portfolio of energy assets,” and other power plants not owned by Entergy also help provide Arkansans with electricity.

MISO helps Entergy to determine from which power stations to draw electricity to serve customers in the most cost effective way. It also monitors grid capacity and notifies Entergy of overuse, as it did Tuesday for Arkansan customers.

“They basically help get power from the generation sites (power plants) to us and they choose the most reliable and cost effective generation to bring to us,” Wasson said. “They are responsible for making sure that there’s enough generation on hand to be able to meet those needs.”

Electricity is transmitted directly from the generation sites to power lines, Wasson said. There currently isn’t technology to efficiently store the large amounts of energy that would be needed to power customer blocks, he said.

“It comes straight from the generation source. So, take the Union Power Station: they generate that power and it is immediately put on the transmission lines. They then take that to all the load areas where it’s needed — the Union Power station serves Arkansas, Louisiana and Texas and it’s sent to those respective areas — and then from the transmission lines, Entergy distributes it,” Wasson said. “It’s almost instantaneous. There’s no way to store it, no efficient way to store it. That’s one of the issues we have — once you have the capacity of electricity that’s available, that’s it; that’s all you have.”

Why was the grid so close to being over capacity?

Wasson said the power grid serving Union County sees its highest load in the mornings and evenings, when people are at home from work and school. That’s true of pretty much all power grids, he said.

“At this time of the year, you’ll see peak loads in the evening and in the morning. Most of our customers, they’re at home, they’re cooking, washing clothes, taking a bath — they’re doing things that consume electricity and they’re doing it all at once,” he said.

During the extreme winter weather this week, people also utilized heaters, Wasson said, which was a big contributor to the grid getting so close to overloading.

On Tuesday, MISO notified Entergy Arkansas that it needed to begin load shedding immediately around 7 p.m. The company shut off power right away, and over the two hour period, about 60,000 customers in the state were affected by rolling blackouts. At 8 p.m., much of Smackover was without power due to the forced interruption. 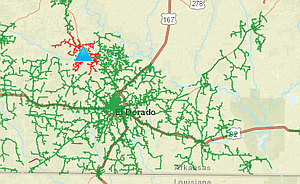 A large part of Smackover was without power at 8:45 p.m. Tuesday, according to Entergy.

Wasson said interruptions should have only lasted for half an hour, though it could have lasted longer for some customers.

“There might have been a few that lasted a little longer. It’s all based on real-time information. MISO — they communicate with us. They say ‘we need you to cut’ so many megawatts of capacity, and we have to complete that to maintain that threshold,” Wasson said. “We use the 30 minute segments so we can restore power to customers so it doesn’t get too cold — your pipes won’t freeze in that time, your house won’t get too terribly cold — and it helps spread the burden around.”

Wasson said the only customers that are exempt from rolling blackouts are hospitals and nursing homes.

“I think we can stand by that, especially during the pandemic” he said.

Entergy has a list, Wasson said, of areas where power can be shut off to help shed load.

“We go off that list, roll through that to be able to curtail and remove that (extra) load from the system. We know real-time what load we’re reducing from the system until we meet that threshold they (MISO) give us. That threshold is fluid; it dropped Tuesday, and that’s why the blackouts ended earlier than we had anticipated. It’s very dynamic,” Wasson said. “I can tell you from what I’ve seen there’s a very fair distribution.”

In addition to the increased load caused by the use of heaters, several power plants have been unable to produce this week due to the weather. Some natural gas plants froze up, according to reporting by the Texas Tribune, and natural gas production also slowed.

Having diversity in its energy assets worked to Entergy Arkansas’ advantage this week, Wasson said, but it was also affected by the slowing or stoppage of such plants that weren’t winterized.

“We spend quite a bit of money to ensure our grid is up-to-date, with available generational sources. They (MISO) do a great job of planning the generation that’s needed for the load that’s needed,” Wasson said. “They don’t have a crystal ball. Nobody saw this happening in 2021. It’s really the extreme cold that’s causing a lot of the issues. We could’ve had more power plants, but it’s the restriction on the equipment that’s caused a reduction in the generation.”

In the summer, power plants generally will continue to work in extreme conditions unless the equipment that delivers the electricity is damaged.

“Normally, during the summer time, almost every asset that you have that’s available, you can bring them online,” Wasson said. “With natural gas (production) being curtailed, that impacts some of our winter(ized) power plants.”

How can future rolling blackouts be prevented?

Entergy Arkansas only had to impose rolling blackouts once this week during the historic winter weather that hit the state, leaving 15 inches of snow in Little Rock for the first time in over 100 years.

Wasson said there are steps homeowners can take to prevent the need for future rolling blackouts, and Entergy has programs in place to help.

“Even for us as residential (customers), I think it would be very important to make sure their homes are energy efficient. Entergy will do a free evaluation, and can also add insulation, help seal doors and windows, add weather stripping — most at no cost to the customer,” Wasson said. “That would be one of my best pieces of advice. It can lower your electric bill, I think everybody would enjoy that. And it can make sure that we’re prepared for these things.”

The difference in home efficiency is the primary reason states in the north, where winters are harsher and colder, don’t see rolling blackouts every winter, Wasson said. Homes are built to hold heat inside in the north, where in the South they aren’t, he said.

“There’s really no difference in the grid systems. It’s more about how we’re able to handle our loads. In the northern states, they’re used to accommodating these loads and the homes are more efficient; they have proper heating and ventilation systems and they’re not losing air out of cracks,” Wasson said. “We’re not used to driving in the snow, so we have several accidents; up there, where they’re used to it, it’s just another day at the office. It’s a lot the same way. We’re using far more power even as a residential customer than what we typically would.”

Relatively few Arkansans lost power this week because of equipment damage or other weather-related occurrences. Wasson said by Wednesday, about 10,000 total customers in Arkansas had lost power, and the peak outage had occurred on Monday, when 5,800 customers lost power. The company had nearly 1,500 workers deployed to restore power to those customers, according to its website.

On Entergy Arkansas’ website are several links with information on saving money on one’s bill and saving energy in general. The company has several programs to improve energy efficiency in residential customers’ homes and offers tips to lower one’s energy bill. For more information, visit entergy-arkansas.com/residential.