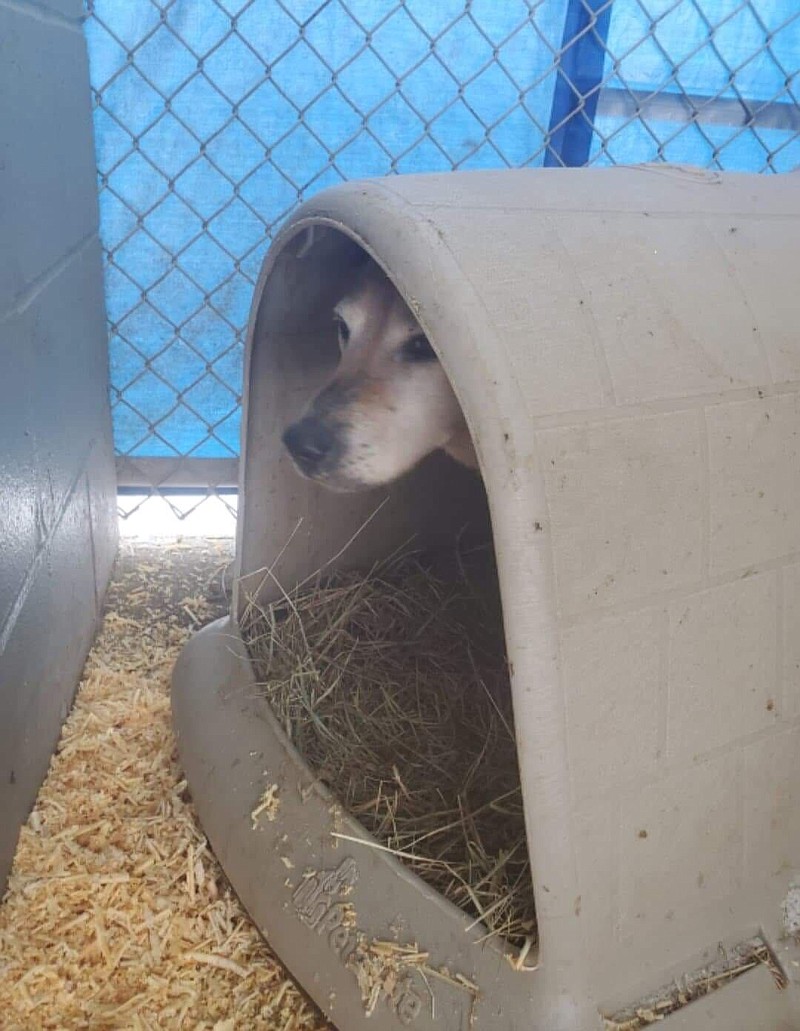 Arby Lou, one of the UCAPS shelter’s longest stays, sits in a run lined with dry wood chips for warmth. Shelter manager Tanja Jackson said they’ve maintained animals’ safety at the shelter by keeping their runs dry, turning the openings of their dog houses away from the wind and topping off dogs’ water bowls with fresh water often. (Contributed)

Winter weather can create hazards for pets, particularly those who stay outdoors.

Union County Animal Protection Society’s Terra Walker said the shelter is taking steps to ensure its animals are warm and safe during the weather and urged local residents to do the same.

“The number one thing is to try to bring them inside, but I know that isn’t always possible. If you can’t do that, you need to have some sort of shelter or dog house away from the wind and loaded with straw or hay,” Walker said.

Walker said that straw or something similar should be used instead of blankets.

“A mistake many people make is using blankets. Blankets in this kind of weather absorb moisture and freeze. You need straw, hay or cedar shavings. You want them to stay dry,” Walker said.

Walker also added that outside animals should be continuously given fresh water due to freezing.

In the event of a power outage, indoor pets should be kept warm just as people should. Walker spoke from recent experience on the issue - the shelter’s power briefly went out Tuesday night.

“Indoor animals should be fine, as long as they have dry warm blankets and are hunkered down,” Walker said.

At the shelter, workers have taken similar steps to ensure the safety of the animals.

They have made sure to pair dogs together for shared body heat, replaced bedding regularly and kept a close eye on older dogs and those with medical conditions.

“Our shelter manager spent two nights [at the shelter] and is constantly checking on them,” Walker said.

Charles Hartsell, El Dorado’s Animal Control Officer, echoed many of these tips and added that he has stayed quite busy, particularly during the first days of the winter weather.

“Right now, my problem is people having dogs [outside] on chains or in plastic dog houses. People who normally wouldn’t tell on neighbors are telling on them because they don’t want their dogs to die. We’ve been doing welfare checks and making people fix problems,” Hartsell said.

“Plastic dog houses are not really dog houses and are used a lot. They are not stable and cannot handle this weather. They can freeze and break in two; I saw one that froze and fell apart on a dog,” Hartsell said.

Hartsell, who will have been the Animal Control Officer for 10 years in September, was celebrating a win for his department that came just before the freezing weather set in.

“[Last] Friday we got every single dog out of the pound and to a rescue. For first time in 10 years don’t have an animal in the pound and haven’t for five days. It’s a good thing; we can care for them there but it isn’t the same as them being cared for in a home,” Hartsell said.

He issued thanks to the Union Parish Humane Society in Louisiana and Care Rescue in Calhoun County.

The Animal Humane Society has several further recommendations for both indoor and outdoor pets.

According to the AHS, pet owners should remove ice, salt and caked mud from pet’s paws after taking them outdoors.

For indoor pets, owners should check to make sure their bedding is not in a particularly drafty or cold area of the floor.

Outdoor pets should be fed larger portions due to the need to burn calories to keep warm and checked for frostbite during freezing temperatures.

“One lick” of a pool of antifreeze can be deadly to an animal, according to the AHS, so spills should be immediately cleaned up.