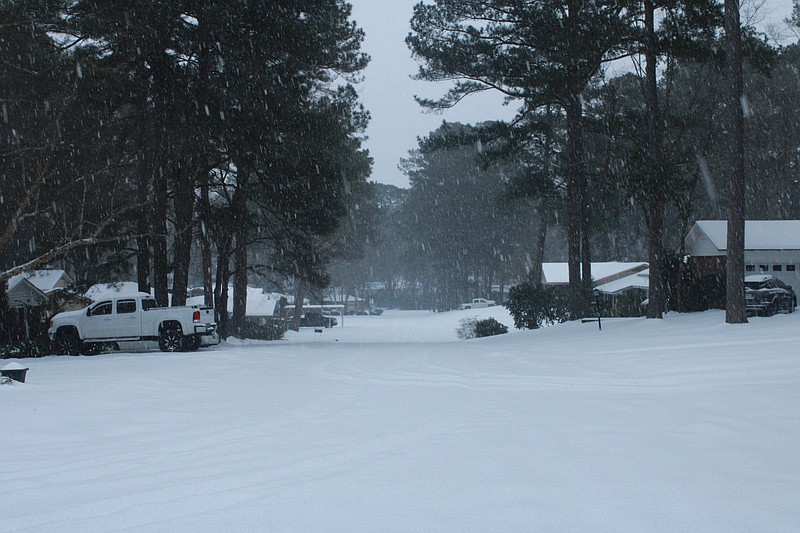 This photo, taken from the middle of a roadway, shows fresh powder and heavy snowfall in a residential area of El Dorado. (Caitlan Butler/News-Times)

Due to inclement weather, the El Dorado City Council has rescheduled its regular meeting to 5:30 p.m. on Thursday, Feb. 25.

Council members were have to convened today for their second regular meeting of the month.

It is the third meeting that city officials have canceled this week because of a batch of winter storms that has brought snow, ice, freezing rain and frigid temperatures to the area over the past several days and is expected to continue today.

City officials had planned a Finance Committee meeting for Tuesday and a meeting of the newly formed El Dorado Water and Public Works Board had been set for Wednesday.

Both have been postponed, with the EWPWB rescheduled to Monday, Feb. 22.

The EWPWB was created during a specially-called meeting on Feb. 4 to help keep council members apprised of projects and issues within the Department of Public Works, which covers multiple city departments, including streets, sanitation, code enforcement, parks and playgrounds and the El Dorado Water Utilities.

Council members agreed to convene the new board on the Wednesday following the regularly scheduled meetings of the Water Advisory Board, which monitors operations at the EWU and acts a liaison between the utilities and the Department of Public Works.

The Water Advisory Board typically meets at 8:30 a.m. on the second Monday of the month.

The February meeting was also rescheduled to Feb. 22 in the El Dorado Municipal Auditorium and the EWPWB meeting will follow at 10 a.m. in the same location.

The Water Advisory Board meeting was postponed because of Presidents’ Day on Monday. The EWU office and City Hall were closed for the holiday, which is a paid day off for city employees.

However, City Hall and the EWU office have remained closed this week because of wintry weather conditions.

“I think it would be best to reschedule it. I think that would be the most responsible thing to do. Even with the weather looking better for (today), I don’t know what it’s going to look like (tonight),” Smith-Creer said.

“Even with City Hall, we’ve been taking it day by day. Even if we can come in today, it’ll probably be after eight o’ clock,” she added, referring to the normal operating hours of City Hall, 8 a.m. until 5 p.m., Monday - Friday.

Community cleanup to be rescheduled

The mayor also announced that The Tony Henry Ward 3 Community Cleanup has also been postponed.

The community cleanup was set for Saturday and Smith-Creer said it will likely be rescheduled for Feb. 27.

“There may still be some ice and slick spots in some areas,” she said. “I think we’re going to go ahead and call it and reschedule for next Saturday. I think conditions may be better then but it’s hard to call.”