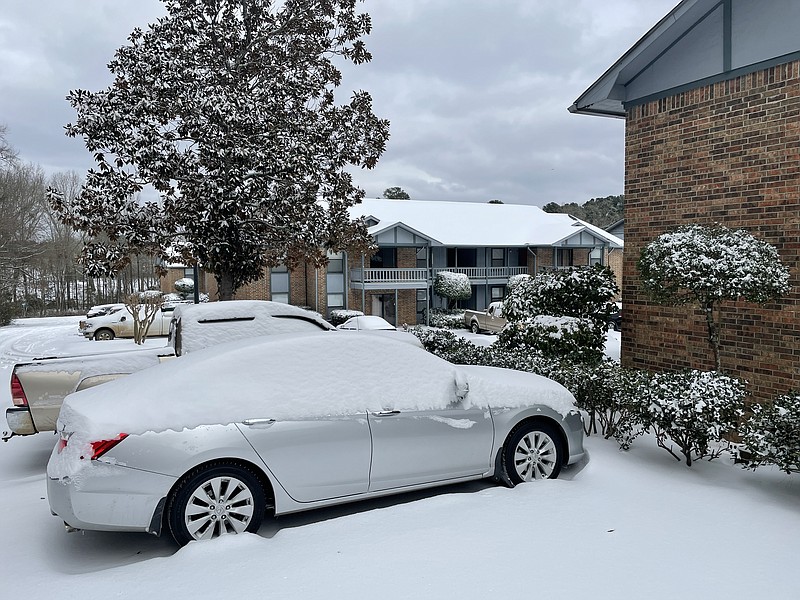 Snow blankets cars all across El Dorado and in residential areas. (Marvin Richards/News-Times)

Emergency service providers across Union County and the region at large have faced unusual challenges due to the onset of winter weather, particularly the much-degraded road conditions that have existed since Monday.

The Medical Center of South Arkansas, the El Dorado Fire Department and Pro-Med Ambulance Service have all altered their services and responded in various ways to these rarely-seen weather conditions.

MCSA, Bennett said, has plans in place to continue care regardless of outside circumstances.

“The hospital runs 24/7 regardless of weather, so we’re used to this and always prepared to care for our patients and the community,” Bennett said.

An immediate challenge facing the facility on Monday was the simple matter of staff members safely making it to work due to road conditions.

Bennett said the hospital’s engineering department undertook the task of transporting staff members who did could not make it to work safely.

“We have nurses and staff members who live in Magnolia, who live all over the region… The engineering department has done an amazing job going to get those from the surrounding area,” Bennett said.

Additionally, MCSA has rooms outfitted for staff members who do not want to travel home between shifts during the winter weather and the dietary department is providing staff members with meals.

In the event of power outages, the hospital has generators “ready to go,” Bennett said.

“We’re able to self-sustain with generators for more than 72 hours and of course if fuel is brought in, we can sustain for longer,” she said.

The MCSA emergency room has not seen an uptick in patients, at least as of Tuesday.

“The volume has been stable, we haven’t seen any dramatic drop or rise,” Bennett said.

The El Dorado Fire Department has also not seen an uptick in emergency calls during this time, according to Chief Chad Mosby, but have faced a slower response time due to road conditions.

“We have had our normal amount of calls lately, not an increase necessarily. Our response time has been slowed because of the snow on the roads, but our number one priority is getting there and taking care of the emergency,” Mosby said.

Mosby said that residents should refrain from being out on the roads when unnecessary during these conditions.

“People just out sightseeing and that kind of thing can cause problems and undue responses from police and the fire department,” he said.

Mosby also warned that road conditions could become more hazardous as a result of the second winter storm.

“Conditions aren’t as bad as they could be [on Tuesday.] The main thing we have now is snow because we haven’t had a melt yet. [Tuesday] is the first time we’ve seen a melt and as snow is scraped away and the asphalt is exposed, it will start melting. As temperatures fall again, we stand a chance of it re-freezing and turning into ice,” Mosby said.

Ken Kelley, CEO, president and a paramedic at Pro-Med Ambulance Service, echoed many of these sentiments.

“We’re as planned and prepared as we can be. The biggest challenge is travel on secondary roads and bridges, it’s treacherous for us just like anyone else. Our response time has been slowed, it just takes longer to get to calls. It doesn’t do anyone any good if we don’t make it there,” Kelley said.

Pro-Med crews work 24-hour shifts, and Kelley said they have sleeping quarters and hot meals for those who wish to remain after a shift.

Kelley, like Mosby, encouraged residents to stay off the roads unless travel is necessary.

“Essential services have to keep going, and we need good access [to roads],” he said.

Pro-Med has, according to Kelley, seen about a 10% increase in call volume as of Tuesday.

“There’s always an uptick in severe weather crisis. We get calls from people running low on medications, and we have people who are on home oxygen who call for breathing emergencies. Things like slips and falls tend to go up. But our call volume isn’t up significantly, maybe about 10%. But we do expect that will go up,” Kelley said.