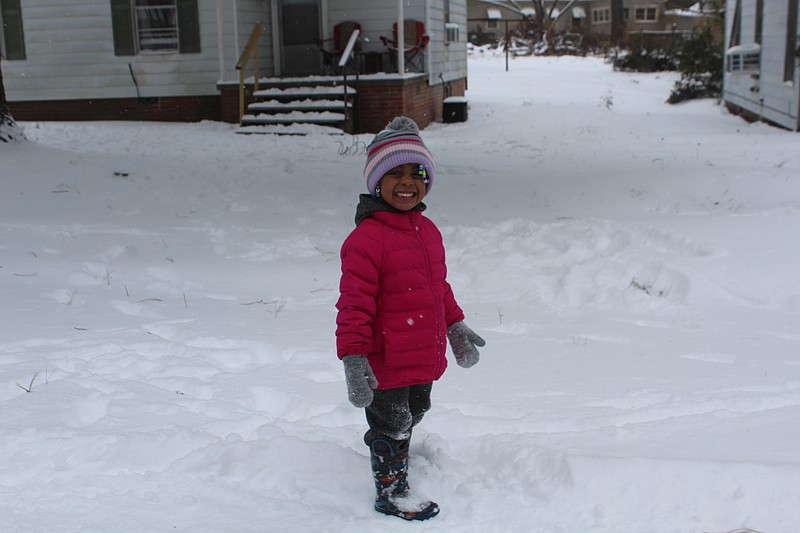 Though it was too cold to use Neel Park’s swingset and slides, several local children were bundled up and out enjoying the snow day on Monday. (Matt Hutcheson/News-Times)

Union County residents awoke Monday to a winter wonderland, as snow blanketed roads, cars and everything else in sight.

Brad Bryant, a meteorologist at the National Weather Service’s Shreveport office, said 3.3 inches of snow had been reported in El Dorado by 8:31 a.m. Monday. A News-Times reader reported 6 inches of snow on the west side of El Dorado Monday afternoon.

“The snow is mainly over now. There will be a little bit of flurries throughout the day,” Bryant said early Monday afternoon. “The main worry over the next 24-hours is the cold. It’s going to be brutally, record cold.”

Temperatures were expected to drop to the single digits Monday night before warming to the mid- to upper-20s during the day Tuesday, Bryant said. However, the forecast calls for even lower temperatures tonight as a second winter weather system rolls in.

“Tomorrow (Tuesday) night, we’re expecting another system to come in and increase precipitation chances in the night into early Wednesday, and right now we’re worried about a lot of freezing rain,” Bryant said. “In El Dorado, it’s going to be a little closer call what precipitation type it will be. It may start as sleet or snow and then transition to freezing rain.”

Bryant said with freezing rain comes a higher chance for power outages. He said there was still uncertainty Monday afternoon where it would snow or sleet or where freezing rain would fall, and El Dorado is near the point where snow and sleet could turn to freezing rain.

“I think it definitely has potential to be more freezing rain, and if that happens, it could be a much more significant amount that could cause power outages. The snow we got can be problematic to drive on, but it’s a lot better than driving on a sheet of ice,” he said. “It’s definitely a possibility that this next event, it may happen on top of whatever (snow) is on the ground now and turn it into a real mess.”

Bryant explained that the cause of the extreme winter weather is that “the weather pattern across the Northern Hemisphere has gotten very amplified.”

“Usually the Polar Vortex keeps the cold air in the Arctic Circle, so when that breaks down, that weather will spill down towards the equator. Of course, it won’t make it there, but it will go onto land masses,” he said. “There’s patterns like this set up to deliver cold air to the South, and this is very extreme weather. You have a lot of energy in the Southern Jet Stream and it picks up a lot of weather that would ordinarily be thunderstorms.”

The last time temperatures dropped below 0 degrees in El Dorado was around Christmas in 1963, Bryant said, although they did dip as low as 3 degrees in January, 2018.

“This could be a top 10 coldest ever in El Dorado, but it would have to get down to 0 degrees,” he said.

Bryant said temperatures could remain below freezing until Friday or Saturday this week. He said plants that were outside overnight Monday are probably already dead if they’re not hardy.

“This is the kind of cold that will kill plants,” he said.

He recommended that exposed pipes be covered and that Union County residents run water through their faucets continuously to prevent their bursting. He also said pets need to be brought inside or given warm shelter.

Additionally, should the power go out, people’s homes will become very cold. If one is using a generator, it should be placed in a well-ventilated area to prevent against carbon monoxide poisoning.

“We see a lot of carbon monoxide deaths,” he said.

He also noted that space heaters pose a safety risk and should not be used continuously or placed near flammable things.

“I don’t think it (snow) is going to melt any time soon and we’re not expecting it to get above freezing before this next event comes in,” Bryant said. “Even though we have this snow and it’s really cold, this whole winter weather event for the region is not over with.”

Union County Judge Mike Loftin travelled throughout the county Monday, starting before 11 a.m., and said that by about 2:20 p.m., he’d only seen two vehicles off the roads. He advised that local residents stay in unless absolutely necessary.

“If you have to go somewhere, if you’re careful, you can get around right now. They (the roads) are a little slick — I’m in a four wheel drive; two wheel drives, you might have a little more trouble,” he said. “If it’s not absolutely necessary that you get out, stay in. That’s the safest thing to do. If it is an emergency or absolutely necessary, you can get around on this stuff, just be very cautious.”

He said he considered salting county roads; however, he believed if that was done, the roads would re-freeze overnight and be even worse Tuesday. He also said blading the roads with a road grader would lead to overnight freezing, making them worse on Tuesday.

“I think the way they are right now is the best they’re going to be for a little while and probably the best for any kind of traffic is to just leave them alone. If we start blading them, they’re going to really be slick in the morning,” he said Monday.

Union County Sheriff Ricky Roberts said on Monday that traffic seems to be moving well, though some vehicles were getting stuck on the side of the roadway. He said the UCSO had only had one call Monday morning, about a vehicle fire north of Smackover.

“It’s [Tuesday] morning that I worry about,” he said.

“Please limit driving as much as possible and conserve energy in your home ‘til they tell us the shortage is over. Stay home and enjoy the view, it is beautiful out but not worth having an accident,” he said.

Norphlet Mayor Jim Crotty reported no urgent problems in his municipality on Monday and said that the city fire chief and other department heads are “on stand-by” to deal with any issues. He reported that the town received “about five inches” of snow.

“It was already a holiday, so school was out and the post office, banks - everything is closed,” Crotty said Monday.

Crotty said the city will apply salt to the entrances of businesses around town today.

Several readers responded to an inquiry posed by the News-Times on Facebook about conditions around Union County (and beyond) on Monday.

“[We have] some slick spots in the driveway [and] some windchill but nothing precipitating at the moment,” they said.

Reader Billy Robertson submitted a picture of a measuring tape indicating 5 inches of snow “outside of Parkers Chapel.”

Reader Richard McMurray expressed exasperation with the state of the roads in the county.

“It’d be nice if the city and county actually had road crews to clear the roads,” they said.