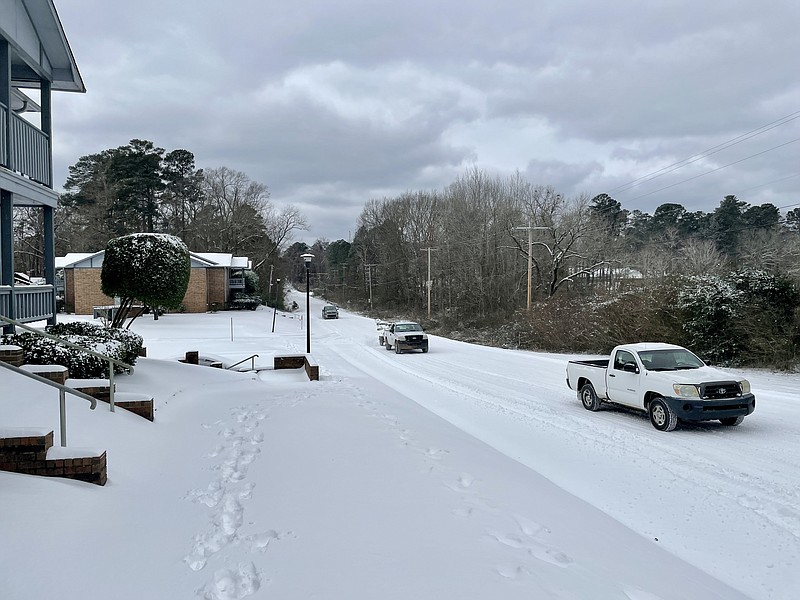 Fluffy white snow served as the backdrop all around El Dorado and Union County on Monday morning after a night of severe winter weather. This photo was taken around East 19th Street and North Calion Road. (Marvin Richards/News-Times)

What was to have been a day off turned into a busy day on Monday for many city employees.

Nearly four inches of snow ushered in Presidents Day in El Dorado and public works employees spent the day preparing for another batch of wintry precipitation, possibly freezing rain, that was forecast for today and early Wednesday morning.

City crews began work at approximately 8 a.m. Monday, salting and sanding streets while concentrating on some of the slickest spots in town, said Robert Edmonds, director of public works.

By early Monday afternoon, Edmonds was manning a dump truck that hauled sand around the city.

A city road grader could be seen around 1:30 p.m. clearing snow and ice from streets in the area of Fifth Street and Lester Avenue.

“We’re getting ready because (today) is expected to be slicker than (Monday) and (this) evening, we’re supposed to have more of this, possibly eight inches more,” Edmonds said.

Keeping the entrances to Medical Center of South Arkansas clear was one of the city’s top priorities.

City crews also focused on some of the steeper slopes in town — areas to which the El Dorado Police Department responded Monday morning after receiving reports of vehicles getting stuck and slipping in snow.

Two such areas were East Hillsboro and Martin Luther King and the east and west sides of the intersection at North West Avenue and Fifth.

“We’re going to try and get some of that snow knocked off of there and salt and sand it and get a little more traction,” Edmonds explained.

He reiterated,”We’re going to work until we get some of the worst spots treated and we’re going to keep the entrance to the hospital open the best we can so the ambulances can get through.”

There were no reports of trees or large limbs cracking and falling under the weight of snow and blocking city streets by early Monday afternoon.

Emonds that city crews will be prepared if the next round of winter storms brings a layer of ice to the area.

“If you’ll notice, this snow is really drying up. Whatever is falling on the tree tops, the wind is blowing it out of the limbs so they’re not weighted down,” he said.

Traylor said the schedule was already a day behind due to Presidents’ Day, one of several paid holidays for city workers.

“I don’t think we’ll be able to do anything before Thursday or Friday, unless the weather changes. It’s pretty bad out there,” Traylor said. “We already know what’s out there today is going to freeze tonight.”

Additionally, icy conditions would make it impossible for sanitation workers to pull the hill leading to the Union County Landfill in heavy solid waste trucks, he said.

“We’re not sure if they’re open or not anyway but our goal is we’re going to have to take it day by day. It may be Thursday before we can get back out there, but that’s depending on the weather,” Traylor said.

He said the city will notify the public when garbage pick-ups resume and sanitation crews may have to work through the weekend to complete their routes.

John Peppers, general manager of the El Dorado Water Utilities, said the EWU office will be closed today because of inclement weather.

“(The closure) could go further than (today) because we’re supposed to get eight or nine more inches of snow (tonight). Gosh, I don’t know if I’ve ever seen this much snow,” Peppers said.

Peppers also advised residents to keep their faucets dripping “at a trickle” overnight to help prevent their water pipes from freezing.

For more tips to stave off frozen water pipes, visit the EWU website at www.eldoradowater.com.