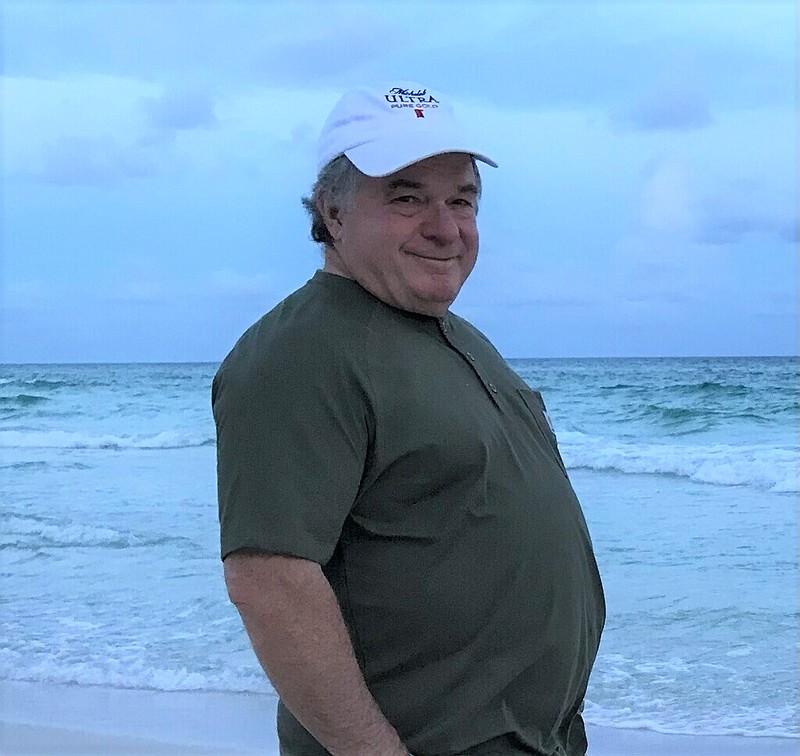 Davis is statistically one of the 463,659 people - as of February 9 - who have died in the United States due to COVID-19. Hearing the story of his life and of his final struggle against the virus is a reminder that each of those numbers represents a person and, beyond that, a family.

Davis was a physician at and owner of Smackover Family Practice Clinic where he worked alongside his son, Dr. Keith Davis, and his wife, Sheila Davis and the rest of the clinic’s staff.

A recurring theme among those who talk about Davis is the idea that he was an “old-school, country-style” doctor. Davis made house calls regularly, was known to re-open the clinic after hours or even treat patients at home and had quite a few patients who doubled as fishing or hunting buddies.

Sheila and Keith recall returning from a rare vacation only for a line of cars to follow them home, seeking care from Dr. Davis and people “showing up at the front door like we’re the emergency room.”

Richard and Sheila were young - 16 and 17, respectively - when Keith was born. Both come from working class backgrounds.

“You could say we came from living on government subsidies, food stamps and housing, to where we are now,” Sheila Davis said. 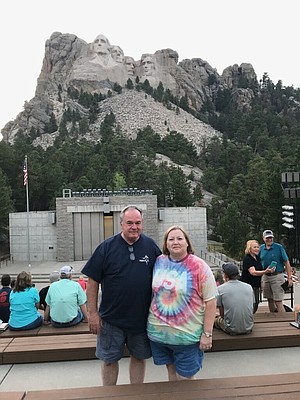 Dr. Richard Davis and his wife, Sheila, on vacation together. (Contributed)

Keith Davis attributes his father’s ability to be the physician he was to this background.

“Part of the challenge in medicine, especially down here, is having patients for lower socio-economic background or people with less education. You have to be able to relate, to understand money problems. We’ll have drug reps say, ‘With the card it makes the copay $50, who doesn’t have $50?’ A lot of people. Going through med school, you’ll meet a lot of people from more well-to-do areas who aren’t in touch with that. When you’re comfortable around quote ‘normal people,’ they can relate to you better and are more comfortable themselves,” Keith Davis said.

Davis’ decision to become a physician was one based more in love than money, at least according to a story he regularly told.

“Here’s what he always said when anyone asked him. We were getting to know each other, dating and he asked what kind of guy I want to marry. I told him I was going to marry a doctor… He said the next day he went to the counselor’s office and asked about the toughest college pre-med program and they said Hendrix [College]. He asked for the courses to be able to get into Hendrix… I think he was probably leaning towards the railroad [industry], because what his dad, brother and grandfather did,” Shelia Davis said.

Davis went on to attend Hendrix College and later the University of Central Arkansas for pre-med, completing his Doctor of Medicine degree at the University of Arkansas for Medical Sciences in Little Rock in 1983. Throughout college and into med school, Davis worked at Cash Lumber to help, along with grants and other financial assistance, pay for his schooling.

His choice to pursue medicine led to several immediate and extended family members to follow in his footsteps, including youngest son Steven, who is a nurse anesthetist.

The family’s path to Union County emerged when it was time for Richard to complete his residency. The region and the residency itself seemed ideal for what Richard wanted to pursue in his professional and personal life.

“He always hunted and fished in south Arkansas, so that was one reason he picked AHEC and El Dorado, plus they did a lot of obstetrics and he wanted to deliver babies when he got out. He wanted to do everything [as a physician],” Keith Davis said.

Davis soon proved he was fully capable of embodying the role of the rural doctor.

“I think it was the second year we were here there was a big flood. He jumped in a jon boat and made home visits to people who were home-bound. There was an ice storm maybe that same year and he jumped on a four-wheeler to do the same thing,” Keith Davis said.

The next steps led to the Smackover Family Practice Clinic, which the family purchased in 1986. Since their purchase, the clinic has grown in both staff size and in its medical capabilities.

Davis was known for his involvement in the community, such as free physicals for Smackover-Norphlet athletes.

He also served as a sideline doctor during the many years Keith and Steven Davis were athletes in the school district.

Davis even, on apparently more than one occasion, was utilized by local police to speak with patients who requested him in order to defuse high-pressure situations.

In his personal life, Davis was an avid hunter and fisherman, a cooking enthusiast and a skilled saxophonist.

In the last few years he checked a few final entries from his “bucket list,” including downing a large deer in Kansas and catching tuna in the Gulf. He had so pared down the list, in fact, that he told Sheila that she should pick all their activities going forward.

Sheila Davis said one of her husband’s retirement plans was to set up a completely free clinic.

“That was his retirement goal, to still be a doctor, give care but with no paperwork or insurance - just treat patients,” Keith Davis added.

Even at the current Smackover Family Practice Clinic, Keith and Sheila said, no patient has ever been sent to a collection agency.

“We just try to work it out with the patient,” she said.

The two also said Richard had never had a malpractice suit filed or, to their knowledge, any complaint with the medical board.

Last year, near the start of the pandemic, Davis began slightly cutting back his work schedule.

He began leaving the clinic at noon but continued paying doctor visits to several local companies including El Dorado Chemical, Lanxess and Clean Harbors, something he did for his entire time in Union County.

This, sadly, would unexpectedly be as close to retirement as Davis would get.

He wore an N95 mask “all the time,” limited his exposure to others and took strict measures even at home.

He had recently welcomed his first grandson, Lennon, into the world, but despite his excitement only took one, socially-distanced picture with the infant.

These precautions emerged from Davis’ own contention that he was unlikely to survive a COVID-19 diagnosis.

“He said from day one: if I get COVID, I’ll die,” Keith Davis said.

“He said it back in March, that he has too many risk factors. He was adamant about it,” Sheila added.

Still, he continued to see and treat patients throughout the pandemic.

“He kept working, kept seeing patients. He tried to limit his exposure but patients have to be seen,” Keith Davis said.

Keith, Sheila and Richard tested positive for the virus on the same day.

Sheila and Richard got tested to make sure they were negative before going to see Richard’s mother for Christmas. Neither had symptoms at the time, so the positive diagnosis was a surprise.

“Even after he went in the hospital he was more worried about me because technically I was more sick. He felt fine, his oxygen level was just down a bit. He called me and said, ‘I feel fine but my oxygen level is reading at 85%, should I go to the hospital?’ And I told him yes,” Keith Davis said.

Davis decided to heed his son’s advice; this would be the last time any family member saw him in person.

“We probably texted and talked more during those two weeks, with him in the hospital and me quarantined, than we did even working together,” Keith Davis said.

Richard was soon moved to Baptist Health Medical Center in Little Rock due to his worsening condition.

Keith Davis closely monitored his dad’s condition and medical care and, as a doctor himself, offered a detailed account of those last few days.

“It was dire when they moved him up there, I’d say his chances were probably 5% initially. But he made this almost miraculous recovery. The plan at that point, on the weekend [before] he passed, was to have him extubated. He had improved to where they were taking his sedatives down, he was following verbal commands and they were letting his body rest. Then he developed a GI bleed … We really don’t know. It was one of those things, like I told Mom, where his chances of making it were probably 90% if nothing else happens… We don’t know if he was having micro-clots in different areas. They had his oxygen requirement maxed out, and his blood pressure went really high for a few days and started tanking,” Keith Davis said.

The family had multiple moments of vacillation between hope and despair during the ordeal.

“The move to Baptist was anticipatory. We knew that if he had to go on the [ventilator], transferring would be the next move. He really started tanking during the transfer. His blood pressure was 60-over-40 the whole way up there and he coded a minute or two after they got there, but they got him on the ECMO [extracorporeal membrane oxygenation] but did have to resuscitate him for two minutes. I told Mom that now he has died of COVID and got brought back, so now I think he’s going to make it. That was probably the toughest thing - I had already resigned myself, after the transfer, that we were going up there for end-of-life stuff. Then, something miraculous happened. We were making plans for him to come home,” Keith Davis said.

They formed plans to pay an in-person visit after Richard was taken off the ventilator and after they were sure of being free of the virus themselves.

“The biggest regret is we could have gone and seen him, but we were trying to pick times. Mom could get one visit but, even though we were in recovery, we weren’t sure if we were still carrying the virus. Since things were progressing, we were going to wait until he was off the vent so we could talk to him,” Keith Davis said.

Sheila was, thankfully, able to speak with Richard on the phone the night before he passed.

“It was like he’d been holding on, that’s what he needed,” Keith Davis said.

Several family members rushed to Baptist to at least be nearby when Keith received word of his dad’s worsening condition.

“He had family there, they just couldn’t be in the room. That made it tough, because we went a month without seeing him,” Keith Davis said.

Family members were able to video chat several times with Richard, however, and they later found out he befriended several nurses during his stay who helped keep him company and “sneak” him snacks.

Keith and Sheila both attested to the fact that Richard had patients who would drive from places as far as Benton or North Little Rock to remain under the doctor’s care.

“He was a gem in the community and a wonderful doctor. He’d be there anytime you needed him and would give out him home and cell phone numbers. He came in and kept the clinic going, and it has grown tremendously since he got here,” Long said.

“He was one-of-a-kind. When me or any of our other friends would go see him, we’d make the nurses mad because we would end up talking and throw him way off schedule. He never rushed anything; I don’t think he ever met a patient he wouldn’t talk to and get to know,” Corley said. 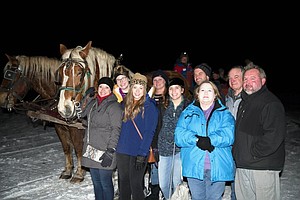