Winter weather conditions expected throughout weekend, into next week 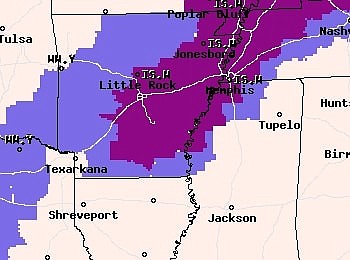 Brad Bryant, a meteorologist with the National Weather Service in Shreveport, said the conditions will last throughout the weekend and begin to intensify Sunday night.

Light rain showers and drizzle along with freezing or near-freezing temperatures should be expected today and Saturday.

That alone is worthy of caution, Bryant said.

“Even light rain when the temperature is freezing could be problematic, especially on bridges and overpasses,” Bryant said. 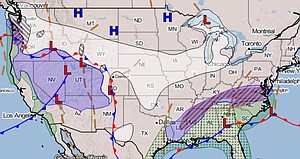 This map shows storms forecast throughout the United States from Friday to Saturday morning. Purple areas on the map represent mixed precipitation; striped purple and pink represents the possibility for freezing rain; and white represents snow. (Courtesy of the National Weather Service)

Temperatures may reach freezing at nighttime. El Dorado was under a winter weather advisory on Thursday until noon, and Bryant said the NWS may issue similar advisories on Friday and Saturday.

“The main concern is going to be Sunday night into Monday… We have a lot of confidence that there’s a significant disturbance coming in and developing a winter storm. It will come in Sunday night. There’s potential to bring snow and/or sleet [to El Dorado],” Bryant said.

Temperatures are expected to be “solidly below freezing” during that time, causing snow and ice to stick to roads and creating travel hazards.

“The really big time cold will probably not get to us until Sunday or Monday; up until then it will be barely above freezing. On Sunday and Monday it’s going to be very cold,” Bryant said.

Bryant added that another winter weather event is also possible later next week.

“We can’t completely rule it out,” he said.

With frigid temperatures and a storm system moving into the area, Robert Edmonds, the director of public works, said the city of El Dorado is preparing for hazardous conditions that could result from wintery precipitation.

He said crews are taking steps to help keep city streets and other areas, including spots near the entrances of the Medical of Center of South Arkansas, as safe as possible.

“We’ve got sand in our yard. We’ve got rock salt. We’ve got all of our equipment serviced and ready to go if we do have some freezing rain. Hopefully, it won’t happen,” Edmonds said.

“We’ve got equipment to keep intersections clear if we get a lot of snow. We’re just preparing for any type of weather events that might occur,” he added.

He said the city’s garbage collection schedule will operate as usual in the event of snowfall.

“If we don’t have ice, solid waste collection will run as it always does,” Edmonds said.

He advised residents to take precautions over the next few days.

“Just don’t get out if you don’t have to get out and remember that bridges and overpasses freeze before (surface) roads do,” he said.

“It would also be a good idea to let water faucets drip (slowly) inside the house and cover up any outside plumbing,” he said.

To prevent pipes from freezing:

• Disconnect all garden hoses and install covers on all outdoor faucets.

• Open cabinet doors below sinks to allow heat from the home to circulate toward pipes.

• Identify the location of the main water valve and the valve on the water heater. Learning the locations of these valves could be useful in an emergency.

• Use pipe insulation or heating tape to wrap pipes near exterior walls and in crawl spaces. This can prevent freezing, particularly for pipes that run along exterior walls.

• Close all windows near water pipes and cover or close open-air vents. Freezing temperatures combined with wind drafts can cause pipes to freeze more frequently.

• Consider weather-sealing windows and heating the basement, if applicable.

• Customers who plan to be away from home for an extended period should shut off water valves to their washing machines.

• Reducing water flow from the faucet at the first sign of freezing.

• Checking faucets for water flow and pressure before going to sleep and when waking up.

• Checking pipes in areas that tend to be vulnerable to freezing conditions, the space around the water meter, unheated areas, exterior walls and crawl spaces.

• Identifying cold-air drafts from the chimney chase or flue and caulking any gaps near water pipes.

If a pipe freezes inside the house, it can be thawed with a good hair dryer. The El Dorado Water Utilities advises against using hair dryers near standing water.

Frozen pipes may also be warmed and thawed by soaking towels in water that is heated on the stove and wrapping the hot towels around cold sections of the pipes.

When thawing a water pipe, residents should start at the section of the pipe that is nearest to the faucet and make sure the faucet is on so that melting water can drip out.

In the event a water pipe bursts, residents are urged to shut off water service at the main valve and call a plumber.

If the break occurs in a hot water pipe, close the valve of the water heater, according to information provided by the El Dorado Water Utilities.

For more information, visit the EWU website at www.eldoradowater.com.

Union County Office of Emergency Management’s Bobby Braswell echoed these precautions and said the county will be monitoring the weather conditions and is prepared to respond if needed.

“People should be sure to go ahead and go to the grocery store, get their medicine and put gas in their car. Just prepare like you would any other time,” Braswell said.

“Entergy Arkansas is closely monitoring forecasts of a second winter storm expected to bring freezing rain, snow, and the potential for ice accumulations starting Sunday. If there are widespread outages, we will deploy scouts to assess damage in all affected areas. It is on these assessments that we base our estimated restoration times. We will communicate these estimates with you, updating as new information becomes available. Our crews will simultaneously be restoring service where it is deemed safe to do so. We ask for your patience, and please know restoring your power safely and quickly is our top priority. Please be aware the restoration process can be hampered by the surge of instantaneous electrical demand from appliances (heating units, water heaters, etc.) when service is restored to your location, potentially overloading protective devices on Entergy’s electrical system. To help mitigate this problem, Entergy encourages you to turn off any electrical heaters or electrical appliances that can easily be turned off until power is restored.”