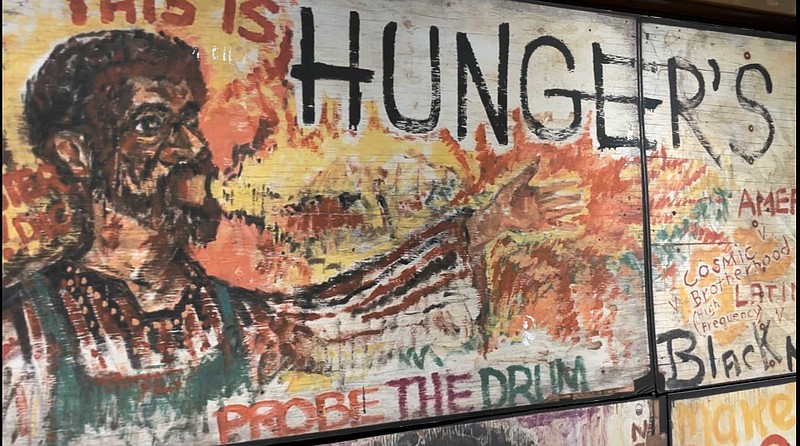 One of the panels from the “Hunger’s Wall” mural that was central to MLK’s Poor People’s Campaign in the late sixties, sent by the Smithsonian’s National Museum of African American History and Culture. (Marvin Richards/News-Times)

The South Arkansas Historical Preservation Society (SAHPS) will be holding its first Black History Month exhibit since the organization’s inception in the 1970s.

The exhibit will feature the “Hunger Wall” mural that developed during Martin Luther King Jr’s Poor People’s Campaign in the late sixties, right before his assassination. The exhibit will also feature other national artifacts and pieces that are commissioned by the Smithsonian’s National Museum of African American History and Culture, as well as local artifacts and stories central to African-Americans in El Dorado.

“When I first walked into the museum and gallery of history, there wasn’t a lot of color,” Steve Biernacki, SAHPS executive director said. “As a biracial man myself, I felt like that was a travesty. We live in El Dorado, where our high school ratio is 60-40, Black to white; yet minorities are not being represented at the Newton House museum or here at the gallery.”

Biernacki, who started as executive director with SAHPS in September of 2020, has made it a priority to have the museum be more reflective of the people living in El Dorado. One of the first events held under his leadership was a Pow Wow commemorating Native American History Month in November last year.

“As a Christian man, as a man who grew up with friends from numerous ethnicities, it was one of those things where I was like, ‘guys, what are we doing?’” Biernacki said. “How are we not celebrating our brothers and sisters of color.”

With the help of SAHPS curator Darrin Riley, Biernacki forged ahead with putting together a Black History Month exhibit for the museum.

Riley, who is a self-proclaimed ‘history nut’, said his passion for the subject, and this exhibit in particular, began stirring when he first came to El Dorado.

“We (Riley and his family) had come from Wisconsin and prior to that, California. So I didn’t understand racism, I didn’t know what it was. So when I arrived here and saw that people were treated differently, I couldn’t fathom it… so this experience ended up spiking interest in me to understand why someone would ever treat someone differently, and so heinously different because of the color of their skin,” Riley explained.

“He’d (Dumas) say, ‘Oh, Carryline put the horse in the lot and come out here.’ I’d say, ‘Master, I didn’t run that horse but it didn’t do no good.’ He sure would whup me. I’d get down and roll. I would stomp and he would do the same,” Smith said.

To read more of Caroline’s story, the stories of other former slaves, and see the exhibit in its entirety, visitors are asked to call the preservation society to make an appointment. Because of COVID-19 guidelines, SAHPS must limit the amount of people in the exhibit at any given time.