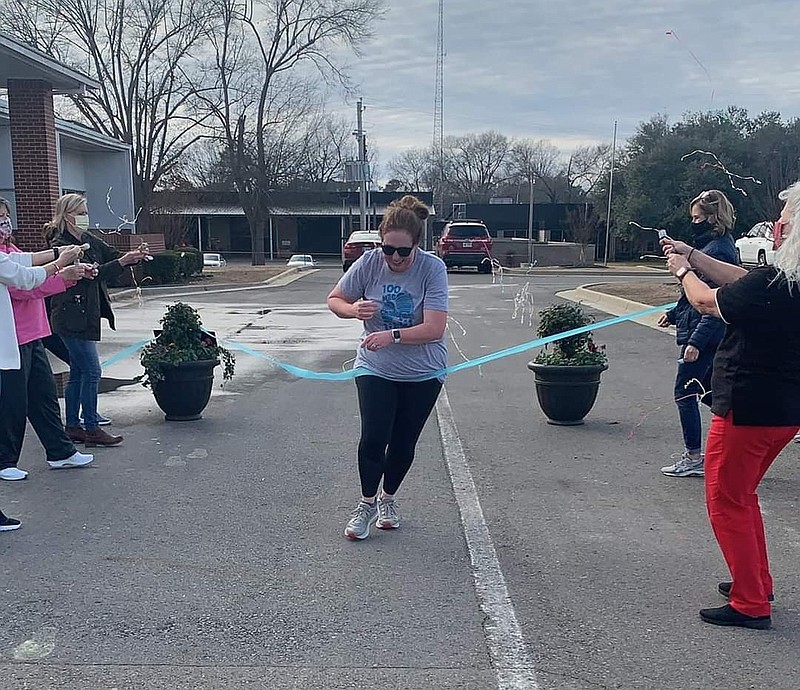 Anna Sanders Warriner crosses the finish line and completes her 105th mile to raise money for The Hub. (Contributed)

Anna Warriner pledged to walk or run 100 miles in the month of January in order to help The Hub, in Camden, raise much needed funds.

On Jan. 30, she completed her goal having travelled 105 miles on foot.

The idea occurred to Warriner while she was surfing the web one day.

Warriner said, “In October at work, we had just kind of a fitness challenge, and we got to choose our own goal… My original goal was to have 50 active extra miles… I ended up getting over 100, and I was like ‘Wow, I can’t believe I did that.’ It wasn’t easy, but I did it. As I was on Facebook in December, I kept seeing an advertisement for ‘100 miles for the American Cancer Society.’” 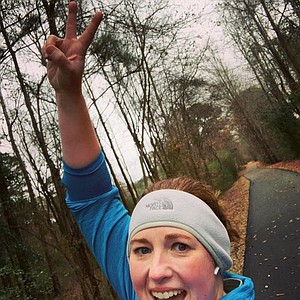 Warriner said that while the ACS is a worthwhile organization, she wanted to keep her donation local and chose the Hub, Camden’s charity that was established to centralize many of the programs that had sprung up over the years.

Toni Greenlee, director of the Hub stated, “When Anna approached me with her idea of the 100 mile challenge, I was so honored that she chose The Hub as the organization to support. But then I thought – 100 miles in a month is a lot of steps! However, if you are following her Facebook posts, you know that she is dedicated to achieve her 100 miles through rain, snow and dark of night. We are blessed to live in such a caring and compassionate community that is always willing to help. Thank you Anna!”

The Hub facilitates programs such as the backpack feeding program, which distributes backpacks of food items to hungry children, and recently has also provided assistance to those struggling from hardships caused by COVID-19.

Warriner established “Anna’s 100 Mile Challenge Fundraiser for The Hub of Ouachita County” page on Facebook for those interested in following her journey and donating. Originally established to raise a modest $200, it far surpassed the goal and as of Monday, Feb. 1, she had raised $2,740.

“So many of our nonprofits haven’t been able to do their fundraisers this year, because of COVID restrictions. The Hub does so many things to give back to Ouachita County… We know that so many people are hurting right now. We live in a high poverty area,” Warriner said. “I didn’t have a huge goal, because honestly, I’ve never done anything like this on Facebook.”

Warriner logged her activity with an Apple watch and tracked her progress in a spreadsheet, then provided updates on her progress via Facebook.

“I didn’t want to overwhelm Facebook through daily posts,” she said earlier this month. “My plan is to update it weekly and then share that with everyone on the page.”

Warriner braved cold weather conditions and even the dark of early morning as she progressed on her journey.

“None of this is going to be indoors. I don’t have any indoor equipment. The Trace is an awesome place so I’m going to try and do some of it there, but it’s going to be a combination of walking (and) running, and if I happen to be hiking, I’ll do that,” Warriner said.

She admitted that finding the time to exercise was often as big of a challenge as the miles themselves.

“It’s not easy. I mean, I work full time, I have a four year old. I have a family. So what I typically do is break it up throughout the day. I’ll do a couple miles in the morning and try to do some miles in the evening,” she said.

Still, Warriner said she hopes her example will spread positivity and inspire others to complete acts of kindness and charity.

“Be kind to one another. Pay forward your kindness in whatever way you can. So many people have been kind to me in my life. I think about them and some of them are still with us and some of them are not, if we can be kind to one another and respect one another,” she said. ” If we can do that our community becomes better, I want a community where my daughter can thrive and have opportunities to do those things. I see those things happening. Those things are happening. There’s so many people doing so many, just incredible… way more than I am doing here… for Camden and the community. If we can do that we make a better quality of life for our children and families. We attract people to move here. There are so many good things here.”