Stand your ground bill voted down by House committee, may still go to a floor vote 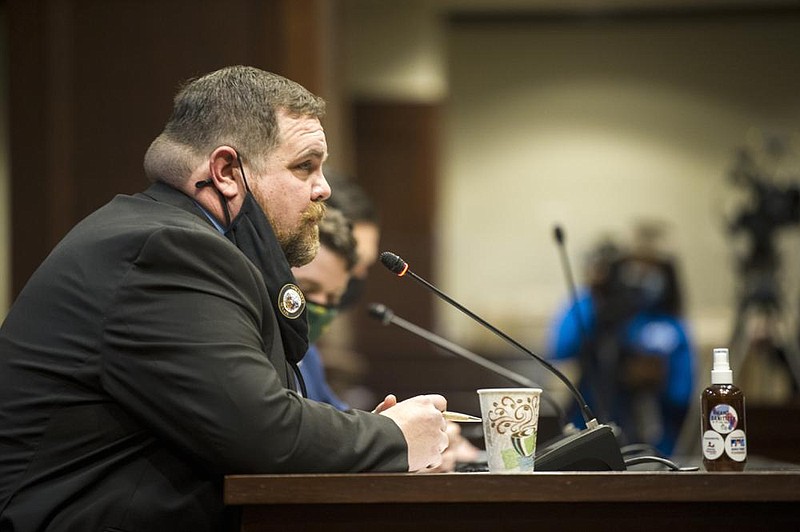 Senator Ballinger introduces his "stand your ground" bill, that would remove the requirement to retreat before using deadly force in self defense, to the House Judiciary Committee during a meeting on Tuesday, Feb. 2, 2021. The bill passed the Senate on January 19th. See more photos at arkansasonline.com/23bill/ (Arkansas Democrat-Gazette/Stephen Swofford)

The sponsors of legislation to eliminate the “duty to retreat” from Arkansas self-defense laws met with their Republican colleagues on Wednesday, after the bill was voted down the day before in a GOP-led committee.

Senate Bill 24, also known as the “stand-your-ground” bill, had encountered some resistance from supporters of gun-rights who said the controversial bill did not go far enough in eliminating rules on the use of self-defense, despite the bill’s support from the National Rifle Association.

Democrats, joined by supporters of gun-control, disability rights and anti-racism movements, have also mounted vigorous opposition to the bill, arguing that similar laws passed in other states have disproportionately been used to justify the shootings of Black victims.

State Rep. Aaron Pilkington, R- Clarksville, had been expected to attempt a procedural maneuver Wednesday that would force SB24 out of the House Judiciary Committee and on to the floor for a vote, but instead Pilkington addressed concerns that had arisen in the Republican caucus.

After the House adjourned Wednesday, Pilkington invited his colleagues to the Republican Party of Arkansas headquarters a few blocks away from the State Capitol to discuss the bill.

A spokesman for the RPA told a reporter from the Arkansas Democrat-Gazette that the session would be closed to the press.

The Senate sponsor or SB24, state Sen. Bob Ballinger, R-Ozark, said some representatives asked Pilington to “give a little time to answer questions” about the bill, “so his plan [was] to meet with everyone” Wednesday night before attempting to extract the bill to the House this afternoon.

It takes a two-thirds majority vote to extract a bill from committee onto the House floor. Republicans currently hold 76 of the 100 seats in the House.

At least one Republican who voted against SB24 in committee on Tuesday, state Rep. Brandt Smith, R- Jonesboro, said Wednesday that he’d changed mind and would support the bill.

Smith had previously cited opposition from a group called Gun Owners of Arkansas, a gun-rights group whose membership he said runs in the thousands, as the reason for his vote against SB4. A representative of that group spoke against SB24 in committee Tuesday, saying that it would make the state’s self-defense laws “confusing.”

But Smith said Wednesday that it became impossible to please all of the gun-rights groups interested in the bill, so he decided to side with the NRA.

Speaking to a reporter, Ballinger said the issue had two do with two similarly-named groups appealing to lawmakers.

“There is a national gun group to the right of the NRA called the Gun Owners of America and they came out and endorsed the bill, so it is going to real hard for any local Republicans to try to claim that this bill is anything but a support of an individual’s freedom and right to protect themselves,” he said. “The local group has no affiliation with the national group.”

The local group has a few leaders “who are gadflies,” Ballinger added.

The bill passed the Senate last month by a 27-7 vote. Gov. Asa Hutchinson, a Republican, has yet to say whether he will sign the bill if it passes the House.