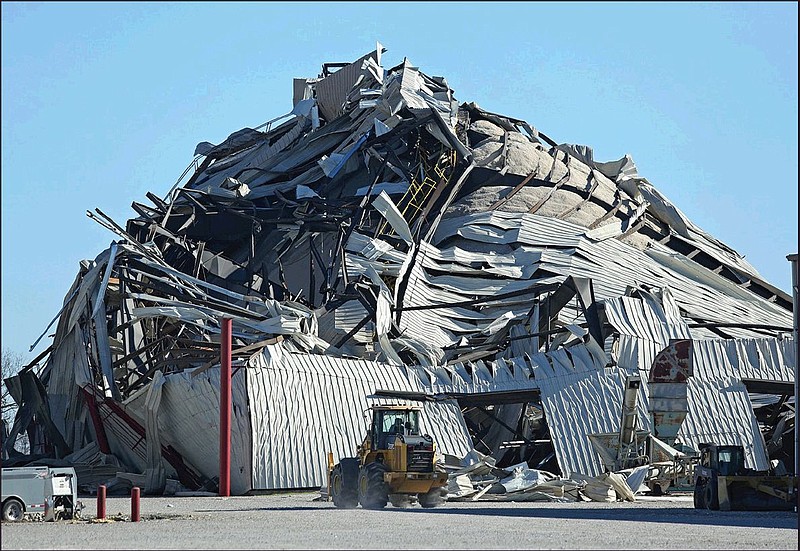 A worker using heavy equipment helps Monday with the cleanup effort at the Adams Land Co. facility in Leachville, two days after a tornado caused extensive damage throughout the community. (Arkansas Democrat-Gazette/Colin Murphey)

Losses sustained by farming operations across northeast Arkansas from a tornado Friday night likely will be in the many millions of dollars, with Adams Land Company in Leachville (Mississippi County) bearing the brunt.

Billed as having the world's largest cotton gin when it opened in 1991, the family-owned Adams operation just north of the town's business district had several structures with walls and roofs sheared off, allowing cotton to be blown back into nearby fields harvested just weeks ago.

"I've seen aerial photos around Adams, and the fields look like they were never harvested [this fall]," Steve Eddington, a spokesman for the Arkansas Farm Bureau Federation, said Monday. "It's just bizarre."

Farm Bureau's insurance adjusters are busy taking claims across Mississippi, Craighead, Poinsett and Woodruff counties, Eddington said. "I guess, if there's an upside, there were no crops in the field," he said. "Everything that could be harvested had been harvested."

In an email later, Eddington wrote, "Rest assured, the impact to agriculture will be significant (structures, equipment, facilities, etc.). We are lucky, in one regard, and that is harvest was complete in almost all cases, though there were stored crops in structures that were damaged as well. All of those situations make it very difficult to even get close to a ballpark figure."

The state Department of Emergency Services on Monday estimated that 300 homes and businesses were damaged or destroyed. A financial estimate isn't available yet, the department said.

Sandra Kennett, longtime office and farm manager for Adams, said Monday there were no injuries among the 30 workers at the gin and a few more at other operations when the tornado struck.

"They'd just come onto their shifts," Kennett said. "We've always practiced 'what would you do if a storm hit?' so everybody in the gin had gotten down into a sort of basement -- the pit of the gin, really -- when the lights went out."

The workers taking shelter in the gin and nearby trucking operations could hear the sound of chat from piles of gravel on the property "peppering the buildings," Kennett said. "Every window of every automobile, of every truck in the lot, was blown out."

Charles "Boe" Adams, a Leachville native and insurance executive who died in 2010, invested millions of dollars in his hometown following retirement, including the purchase of the former B.C. Land Company in 1985. He bought thousands of acres of farmland and constructed an estate and business office east of town.

The new gin he built at the renamed Adams Land Company featured 10 stands -- the massive machines that separate cotton fiber and seed. An average gin has two stands; Adams said at the time it was the biggest gin in the world.

"I think it's still one of the biggest, at the very least, and it was running as good as ever, at about 2,500 bales a day this fall," Kennett said.

Adams Land Company gins cotton from about 50,000 acres in northeast Arkansas and the neighboring Missouri bootheel, including about 28,000 acres it owns and leases to farmers, Kennett said. During the height of ginning season, it has about 100 employees, Kennett said.

"As bad as it is for Adams Land Company, it is even worse for the people and farmers of Leachville and other communities," she said.

While much of the cotton -- of about 1,000 modules still on the property -- was blown back into surrounding fields, some remaining on the property might still be salvaged, she said. "Other gins have already offered to do everything they can to help us," she said. "Everybody has been very generous."

Adams "is already in the process of rebuilding," Kennett said. "We'll be back next year."

One of the buildings likely destroyed was his own: it housed a natural-disaster recovery business. The building, at Main and Doc Rodman streets, housed one of the town's first banks many decades ago.

Wallace had only recently moved his business operations from the old bank building to an area in Leachville not hit by the tornado, Wallace said. Another building Wallace owned that once housed a coin-operated laundry also was heavily damaged, if not destroyed, he said.

"There's a stretch of buildings downtown that had awnings and siding blown off, exposing the old brickwork and signage of businesses from maybe a hundred years ago," he said. "I'm 73 and I've never heard of those businesses."

"Both for Leachville and Monette [10 miles southwest], we were hit in areas that had fewer homes," Wallace said. "The Lord gave us a blessing on that."

One died in Monette, when the tornado skirted the northern edge of town and struck Monette Manor, a nursing home, before continuing northeast to Leachville and to the Arkansas-Missouri line, 4 more miles to the north.