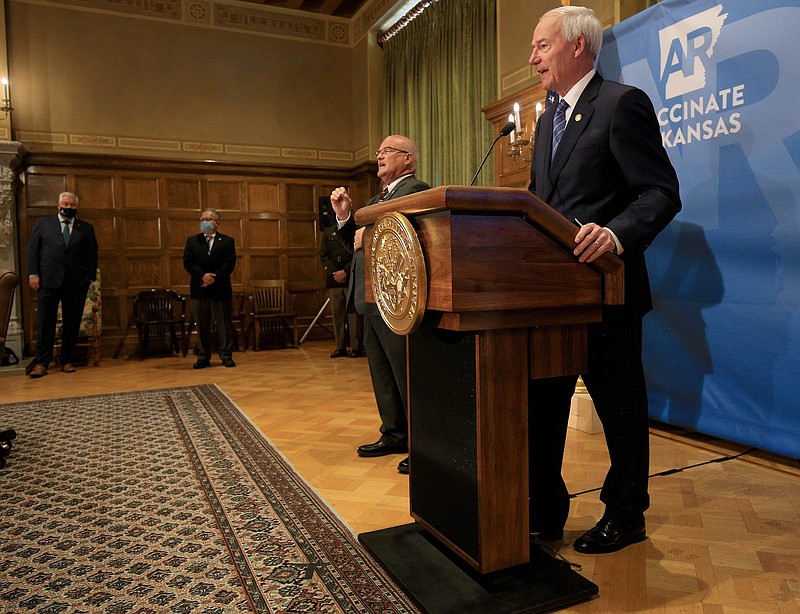 "Everybody should know the strain this is on our hospitals, and the need to get our vaccinations and how critical our bed space is. It fluctuates day by day, but right now, because of the increased number of COVID patients that need ICU care, those are full," Hutchinson said. "This is a cautionary note for everyone and it should emphasize the need to get our vaccinations done for COVID."

According to the Arkansas Department of Health, shortly before 3 p.m., there were 18 ICU beds not designated for COVID patients available in the whole state, along with 1,670 regular hospital beds and 502 ventilators.

Danyelle McNeill, a spokesperson for the ADH, explained that Hutchinson's announcement about the ICU beds was based on data transmitted through the state's COVIDComm system, "which shows ICU beds in the state available for COVID patients and updates on a continuous basis."

The average age of people hospitalized due to COVID-19 has dropped by almost 10 years since December 2020, Hutchinson said; he attributed that both to the delta variant of the virus as well as the difference in vaccination rates between older and younger people. As of this month, the average age of people hospitalized with COVID-19 is 54.6 years old.

"With the delta variant, we're seeing more serious consequences in the younger age groups like this," Hutchinson said.

ADH Secretary Dr. Jose Romero said that in order to have ICU beds available in Arkansas, state residents must get vaccinated.

"The way out of this problem at this point is vaccination," Romero said. "Without it, we're going to continue to exceed the number of (ICU) beds we make available; so each time we make beds available, they will become filled. It is important for everyone to understand that vaccines are the way out."

Hutchinson also addressed an increase in calls to the state Poison Control Center regarding the use of veterinary-grade Ivermectin during his update.

Ivermectin, an anti-parasitic drug, is used in humans to treat some parasitic worms, as well as skin conditions such as head lice and rosacea. The drug is also used in livestock to treat parasites.

However, Hutchinson said, the Arkansas Poison Control Center has recently seen an uptick in calls related to Ivermectin after Arkansans have used veterinary-grade doses of the drug to treat or prevent COVID-19.

"I had never heard of Ivermectin until I went to one of our Community COVID Conversations and the topic was brought up. Since then, it has become a thing out there on the social media ... The calls have been in increasing numbers regarding individuals who have taken Ivermectin -- simply the calls that come into the poison control center," he said.

According to the United States Food and Drug Administration, while some research is underway into the efficacy of potentially using Ivermectin to treat or prevent COVID-19, no data has shown yet that it should be used for those purposes. Ivermectin is not an anti-viral drug.

"What we're seeing across the south -- not just our state -- is that veterinary-grade Ivermectin is being taken by humans, and we're seeing increased numbers of cases in adults and children that are being reported to the Poison Control Center. So if you've taken this, you've had nausea, vomiting, (neurological) symptoms, please call Poison Control or your doctor," said Dr. Jose Romero, state health secretary.

The ADH will be issuing a public health advisory regarding the use of veterinary-grade Ivermectin in humans.

"It is not to be used for human consumption. The drugs intended for veterinary use are made with higher doses of the medication for use in large animals and can be highly toxic to humans," Hutchinson said. "I think it's got to the point that it's important for us to make that public announcement that you have to be careful and not take that which is designed for large animals."

According to a report on COVID cases in schools produced by the ADH, as of August 21, the Parkers Chapel School District was the only school district in Union County reporting five or more active cases of COVID-19 among staff, faculty and students.

On August 21, there were five active cases among PCSD students and workers, and eight cases in total had been identified since the ADH started collecting school case data for the 2021/2022 school year.

Arkansas Department of Education Secretary Johnny Key acknowledged the increase in cases at schools seen since the 2021/2022 school year started last week, but said no school- or district-wide modifications to in-person learning had been reported to the ADE as of Tuesday afternoon.

He said the ADE also will be expanding its "Stop the hesitation, get the vaccination campaign" by holding vaccine clinics at high school football games this fall.

"Over the next several weeks, we will be partnering with the Health Department and (Arkansas Activities Association) to offer clinics at some of the regional rivalry football games. We are working with the AAA to determine what would be good candidates for those games and begin that process, targeting about three to four games across the state on those Friday nights," Key said.

As of August 23, three nursing homes in Union County were reporting COVID-19 cases in the facilities, according to an ADH report.

Advanced Health and Rehabilitation reported that one resident had tested positive for the virus on August 19. They joined a staff member at the home who tested positive the same day.

Hudson Memorial Nursing Home still reported three resident cases, with the most recent being identified on August 9, along with one worker case that was identified August 12.

Timberlane Health and Rehabilitation reported two worker cases, according to the report, with the most recent positive test having returned on August 21.

According to the ADH, in the two weeks preceding August 23, 175 nursing home residents across Arkansas have tested positive for COVID-19, along with 262 nursing home workers.

A report on variant COVID-19 strains present in Arkansas produced by the ADH on August 21 showed that between 21 and 50 variant cases had been identified in Union County. In total, 3,843 variant cases have been confirmed in Arkansas.

The ADH's McNeill said platelet specimens obtained from positive COVID-19 tests are sent to labs at the United States Centers for Disease Control or the Public Health Lab in Minnesota to be tested for variants, where their genetic sequence is analyzed. She said each variant has its own genetic sequence, and the delta variant has accounted for more than 90% of the variant cases identified in the state in the last 60 days.

According to the ADH, the delta virus variant, originally discovered in India, was the predominant variant strain in Arkansas as of August 21. Hospitalizations have increased in people aged 18 to 65 and older who have been infected with the delta variant, the ADH reports, and deaths have increased in people 25 to 65 and older who have the variant.

Commonly reported symptoms of the delta COVID variant include fever, cough, olfactory disorder (loss of smell) and sore throat, among others, according to the ADH.

The delta variant has also been responsible for many breakthorugh cases, where people who are vaccinated contract the virus, across all age groups eligible for vaccination.

The clinic today will offer vaccination to anyone 12 or older. Vaccines are free to all and one does not need health insurance to get a COVID-19 shot.

In Union County, COVID vaccines are available by appointment as well, at Melvin's Discount Pharmacy, Walmart, Walgreens and the Union County Local Health Unit. To set a vaccination appointment at Melvin's, call 870-863-4155; for Walmart, visit walmart.com/COVID; for Walgreens, visit walgreens.com/findcare/vaccination/covid/19/landing and for the Local Health Unit, call 1-800-985-6030.

Hutchinson again talked about Afghan refugees Tuesday, after last week announcing that the state would be glad to do its part in welcoming those Afghans who assisted the United States during the 20 year war in Afghanistan. He said on Tuesday that while Arkansas is not on the front lines of accepting refugees, the state could be used as a back-up to house arrivals from the country.

"I know that there's been some questions about the Afghan refugees and whether Arkansas would receive any of these in our military installations ... The information I have is the sites in Arkansas have been evaluated, (and) they're not in the top tier of installations for receiving large numbers of Afghan refugees, so I don't anticipate that happening," he said. "We are in a back up position that if other states are not able to handle it ... it could be an overflow (site). But we're not on the front line on that."