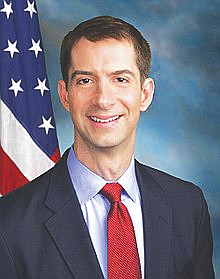 "If you're an American stranded in Afghanistan, or know one who is, please contact my office immediately.

The situation is dire, but we'll do everything in our power to help keep you informed and to help get you out."

The tweet went out. The phone started ringing soon thereafter.

Staffers lined up to field the calls.

"We had an overnight duty roster Sunday to Monday, and we've been working pretty long hours since then to make sure that anybody that reached out to us gets in touch with a live human being who can take down their information and give them whatever the latest update is from the front," Cotton told the Arkansas Democrat-Gazette on Friday. "It's been a long week for all my office, both in Arkansas and Washington, but I'm very proud of what they've done to roll up their sleeves and help so many of their fellow countrymen and help a lot of Afghans as well."

Doug Coutts, Cotton's chief of staff and one of the people fielding the calls, said the stream of inquiries continued throughout the week.

"Our office has kind of been working around the clock, with all hands on deck, to help American citizens and Afghan refugees who have worked with the Americans to get everything correct so they can get in the gate at Kabul [International Airport]," he said.

Refuge can be found within the perimeter and beyond the concertina wire. On the streets outside, the Taliban reign.

"We really just control the airport and the tarmac, and our soldiers and marines aren't being allowed outside the gate. So when people show up at the gate, they have to have everything absolutely correct," Coutts said.

One Afghan American couple told The New York Times on Wednesday that they'd made it inside the airport after reaching out to Cotton's office. When they reached the barricade, they knew the name of a military contact because Cotton's staff had provided it to them, they said.

"I'm glad that we've been able to help Arkansans and Americans from all across the country at least get information they need and, in some cases, get inside the wire into Kabul airport and get on a flight back out," Cotton said.

It's urgent that the evacuations continue, he said, portraying the current environment as highly dangerous.

"In many cases, it will be a matter of life and death, even for American citizens, especially for those American citizens of Afghan descent. I don't think the Taliban recognizes their naturalization into our country," he said.

Recent events in Kabul have been harmful, Cotton said.

"This is a catastrophe for America that will reverberate for years to come," he said.