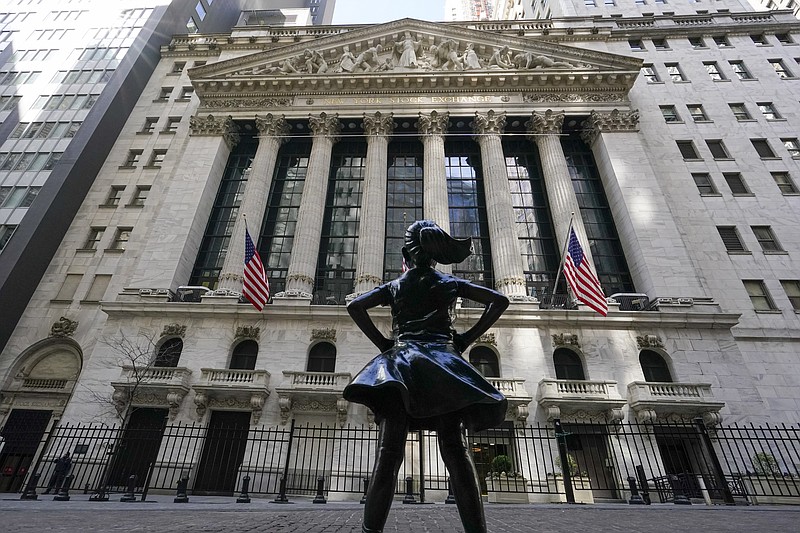 In this March 23, 2021 file photo, the Fearless Girl statue stands in front of the New York Stock Exchange in New York's Financial District. Stocks fell in morning trading Monday, Aug. 16, 2021 amid rising coronavirus infections in the U.S. and around the globe, as well as geopolitical concerns in Asia. (AP Photo/Mary Altaffer, File)

Stock indexes are closing at record highs on Wall Street Monday, despite rising coronavirus infections in the U.S. and around the globe, as well as geopolitical concerns in Asia.

Investors shifted money into sectors traditionally considered lower risk, including utilities and companies that make food and personal goods. Gains in health care and technology stocks also helped offset a slide in banks, energy companies and elsewhere in the market. The travel sector, retailers and companies that provide in-person services had some of the worst losses.

Stocks have been pushing to ever higher records the past couple of weeks even amid choppy trading as investors try to gauge the impact of rising virus cases. Analysts had expected economic growth to slow from its breakneck pace earlier this year, but the highly contagious delta variant has prompted even more caution from investors.

"Delta is ending up being a cascading concern," said Sam Stovall, chief investment strategist at CFRA. "It seems the market really doesn't want to make a commitment for the intermediate or long term."

The concerns are being heightened as students head back to school or prepare to head back to school at the end of August. School shutdowns because of the virus could crimp a recovery in the job market if parents have to stay home. A resurgence could also stifle the recovery for many businesses that rely on people leaving their homes to eat, shop and get other services.

Shares of Tesla fell 4.7% after the U.S. government announced a formal investigation into the company's automated driving features, following a series of collisions with parked vehicles.

Data out of China showed the global coronavirus pandemic continues to hurt economies around the world. Chinese industrial production and retail sales both rose last month, but at a far weaker pace than what economists had expected.

China's economy is suffering from supply chain issues, where manufactured goods that would typically be on their way to foreign markets have either remained unfinished or stuck in shipping containers. The pandemic has made hiring workers harder as well.

The collapse of the Afghanistan government over the weekend was also on investors' minds. While the economy of Afghanistan is small, the country is located in a delicate part of the world, sandwiched between the economic giants of South and East Asia and the oil-rich Middle East.

Bond yields fell and pulled banks lower. They rely on higher yields to charge more lucrative interest on loans. The yield on the 10-year Treasury fell to 1.26% from 1.29% late Friday. Bank of America fell 0.9%.

Also dampening investors' optimism was the University of Michigan consumer sentiment index from Friday, which fell to 70.2 from its previous level of 81.2 in July. That was the largest drop in sentiment since April 2020, when the pandemic took its initial grip on the country.

The unexpectedly bad reading was almost entirely due to the spread of the delta variant of the coronavirus, which has caused hospitals to fill up with unvaccinated patients across the U.S.