Afghan woman in limbo at Kabul airport after Taliban sweep 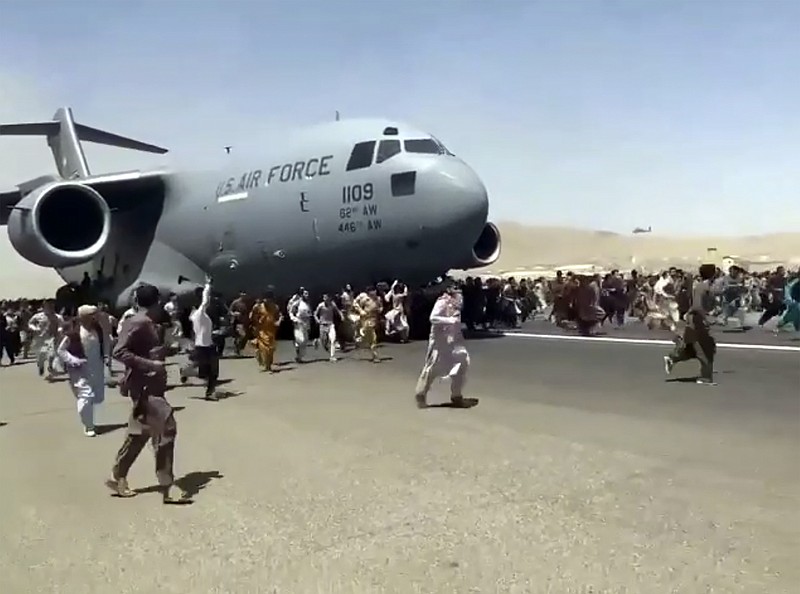 Hundreds of people run alongside a U.S. Air Force C-17 transport plane as it moves down a runway of the international airport, in Kabul, Afghanistan, Monday, Aug.16. 2021. Thousands of Afghans have rushed onto the tarmac at the airport, some so desperate to escape the Taliban capture of their country that they held onto the American military jet as it took off and plunged to death. (Verified UGC via AP)

With hundreds of Afghans rushing the tarmac of Kabul's international airport desperate to flee the return of the Taliban, a young Afghan woman stood in limbo between two worlds.

In one world, Massouma Tajik would board a flight to a country she did not know, destined to become a refugee. In another, she would stay in an Afghanistan under Taliban rule, forced to wipe out the last 20 years of all that she had built and achieved.

Sleepless, hungry and scared she has been waiting for hours at the airport for a flight she feared would never come with questions she could not answer.

"I am in the airport, waiting to get a flight but I don't know to where," she said, speaking to The Associated Press over the phone. "I am here, confused, hungry and hopeless. I don't know what is coming my way. Where will I go? How will I spend my days? Who will support my family?"

Tajik, a 22-year old data analyst working for a U.S. contractor helping Afghan businesses, had gotten the call on Sunday afternoon, informing her she had just 10 minutes to leave for the airport. She had been put on an evacuation list heading to the United States or Mexico -- she was told nothing more. She did not have a visa in her passport.

She left a friend's apartment in Kabul with just the clothes on her back, a knapsack, laptop and her phone.

"My dreams and my plans, are all inside this small backpack," she said.

As the Taliban swept into Kabul on Sunday after President Ashraf Ghani fled the country, bringing an end to a two-decade campaign in which the U.S. and its allies had tried to transform Afghanistan, Tajik and a group of Afghans working for U.S. media were rushed to the city's international airport by their American friends.

The speed of the Afghan government's collapse, the ensuing chaos and the near-complete takeover of the country -- just two weeks before the final pullout of the last U.S. and NATO troops -- has shocked many in Afghanistan and beyond. For Afghan women, it raised fears that all they had achieved in women's rights, the right to go to school and work, would be swiftly taken away.

On the way to the airport, Tajik looked out the window, taking in the last glimpses of Kabul streets, "filled with a scary silence."

There was barely time to call her family in the western province of Herat, seized by the Taliban last week in the insurgents relentless sweep. Before the fall, Tajik had fled the city of Herat, the provincial capital and her hometown, for the Afghan capital, "with hope that Kabul would resist."

"But everything changed," she said. "Everything collapsed in front of my eyes."

Her family did not object to her leaving even though at 22, she was their breadwinner. That role brought her respect and pride -- something the Taliban could take away. She also knew that by staying, she would become a liability for her loved ones -- a young woman, educated at an international university and working with foreigners.

"When I left Herat I thought I cannot leave my family like this, but staying there I become a risk for them," she said. If the Taliban found out, she is convinced "they will hurt my family."

Before leaving Herat, she destroyed all evidence linking her with international organizations, including newspaper clippings. Apart from working as a U.S. contractor, in July she was also featured in a prominent U.S. paper.

Once at the airport, she saw Afghans waiting desperately for a plane out, some breaking into tears. She was tired, she had not slept in three days. Rumors circulated that the planes may even be cancelled. Others asked why there was no security and who would protect them.

"The Taliban can come at any time," she said, her voice faltering.

Six hours passed. She heard shots ring out from the outside -- was it the Taliban?

From where she was, she could see a plane on the tarmac, but it wasn't hers. A mad rush of men and women followed, people overtaking one another, desperate to get out. She watched from a cold steel bench, and for a moment, thought of the unknown that awaited her on the other side.

"I might end up on the other side of the world, in a refugee camp. I have no food, no money with me," she said. And she missed her family. "I am worried for their lives," she said. "All these years of education and hard work, in the hope of making a better life and helping other Afghans ended up being for nothing."

By midnight on Sunday, she thought of giving up and taking a taxi back to Kabul. Herat was out of the question. She got up, but just as quickly changed her mind again.

Sleep would not come. She said looters were causing havoc inside the terminal. She left with her travel companions to wait outside on the runway.

At daybreak, thousands of Afghans had streamed into the airport. Tajik said she saw U.S. soldiers fire shots in the air. Her flight would be here soon, she was told.

Later on Monday, U.S. military officials said the chaos at the Kabul airport had left seven people dead, including some who fell from a departing American military transport jet.

"I will never forgive the world for staying silent," she said. "I didn't deserve this. No one deserves this."