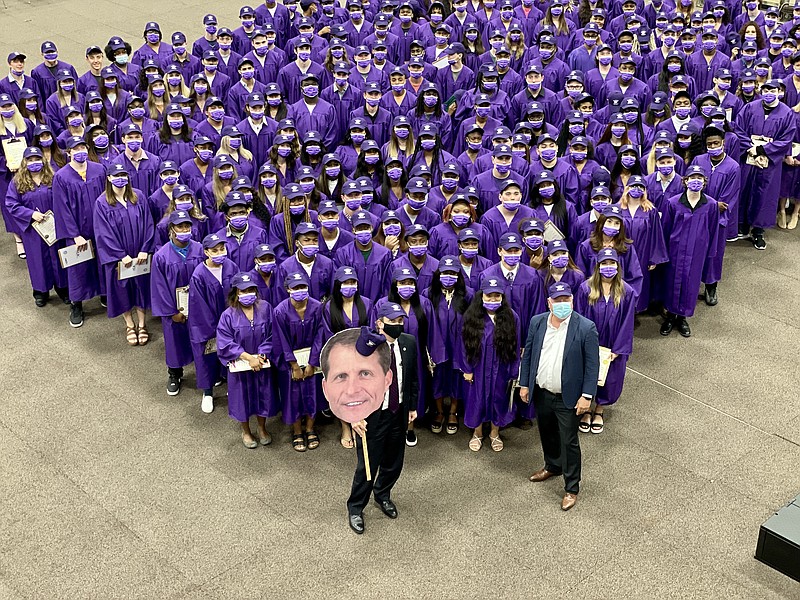 The El Dorado High School Class of 2021 poses together on Wednesday, April 28, when the 14th annual Academic Signing Day was held at Wildcat Arena. Standing with them are R. Madison Murphy, of Murphy Oil, right, and Speaker of the Arkansas House of Representatives Matthew Shepherd, left, holding a cutout of University of Arkansas Head Men’s Basketball Coach Eric Musselman, who delivered the ceremony’s keynote address virtually. (Marvin Richards/News-Times)

The ceremony celebrated 300 graduating seniors receiving the El Dorado Promise Scholarship given through the partnership the school district has with the Murphy Oil Corporation.

EHS Principal Sherry Hill read the names of each senior as they marched out to their seats, where they found their academic letters of intent waiting for them.

Next up, Sylvia Thompson, Director of El Dorado Promise, addressed all in attendance by reading off a number of the graduating class’ accomplishments. Some of those accomplishments included having close to 40 seniors receive a letterman jacket and student Ella Langridge’s being named a National Merit Finalist.

After thunderous applause in recognition of the accomplishments read, R. Madison Murphy, a board member for the Murphy Oil Corporation. Before he could get into his remarks, Murphy coughed a couple of times and joked, “I promise I don’t have COVID,” garnering laughter from the audience.

He talked about the challenges Murphy Oil recently faced economically, and the difficult decision to consolidate and move its home offices to Houston. He also talked about the importance of the company keeping its promise to El Dorado.

“It was important to the company to put that in the press release,” Murphy said. “It was important to our management and board of directors to keep our promise. Also that in your senior year, you all would have the assurance and certainty of the El Dorado Promise.”

Shepherd, who is an EHS graduate himself, started by thanking Murphy and the Murphy Oil Corporation, and asked the audience to do the same with an applause. As the applause started, audience members began to stand up, culminating in a standing ovation, leaving Murphy visually touched by the gesture.

“We should never take that for granted,” Shepherd said. “There’s not a month that goes by where I have another legislator or someone outside of Arkansas ask me how they can do a promise program where they are. The answer is they can’t, because we have something rare and unique.”

Shepherd said the National Collegiate Athletic Association (NCAA) did not approve the in-person appearance of Musselman at the ceremony. He went on to express his frustration with the decision.

“Coach Musselman wanted to be here today,” Shepherd said. “The University of Arkansas wanted him to be here today… It is unfortunate that the NCAA did not approve that request, and I made sure to let the NCAA know how I felt about their decision. Coach Musselman and the University of Arkansas believe in the El Dorado Promise and they believe in the students here today.”

After Shepherd’s remarks, the lights were dimmed and a video was projected in front of the auditorium showing Coach Musselman in what appeared to be his University office addressing the EHS Class of 2021.

“As I learned more about the El Dorado Promise and the academic prowess they represent, the more and more I became excited,” Musselman said. “Anyone who knows me knows that I’m an analytics guy, I like to study the numbers, and as I began to do my scouting report on this group, I was blown away by what you and your fellow classmates were able to accomplish. Together you have achieved an outstanding graduation rate of more than 90%. More than 85% of you will attend college. Many of you will be the first in your family to do so. In fact, some of you are the first in your family to graduate high school. That is extraordinary.”

After Musselman’s address, El Dorado Public Schools Superintendent Jim Tucker came to the podium to lead the signing of Academic Letters of Intent.

“Parents, you should be extremely proud,” Tucker said. “The El Dorado Promise will save you right at $50,000. Thank you Murphy Oil Corporation.”

Tucker then told each student to pick up their letters of intent and to sign them on his count of three. After the letters were signed, another big round of applause followed.

The seniors then stood up and gathered for the senior group photo, which is an annual tradition at Signing Day. There was even an Eric Musselman cardboard cutout held by Speaker Matthew Shepherd to make sure he was included in the tradition.