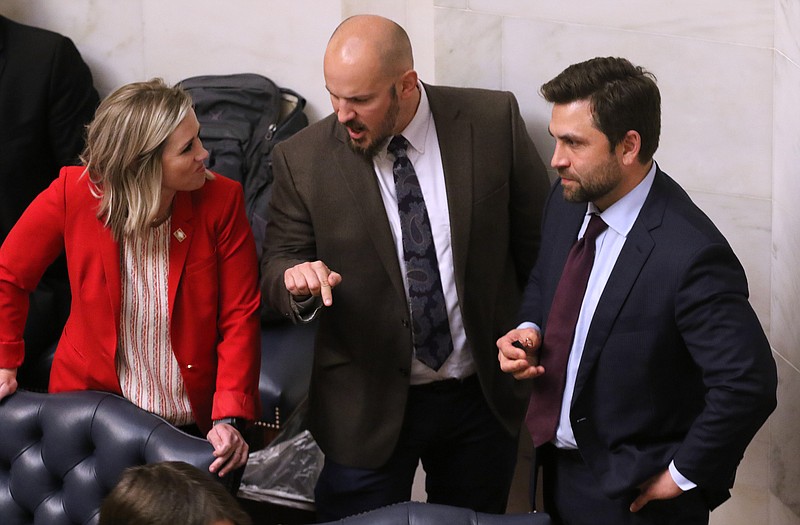 The new legislation declares invalid and not recognized by the state any federal gun restrictions enacted on or after Jan. 1 that violate the constitutional right to bear arms. The House approved it 75-19.

Republicans in Arkansas and elsewhere have been pushing to block federal gun restrictions — despite questions about the constitutionality of such measures — citing fears of new gun control measures from President Joe Biden’s administration.

“This is a way to protect Arkansans from that,” Republican Rep. Jeff Wardlaw, the bill’s sponsor, told lawmakers last week.

The measure aims to ease concerns that prosecutors and law enforcement had raised about a bill Republican Gov. Asa Hutchinson vetoed last week that would have imposed criminal penalties on local and state police for helping enforce federal gun restrictions. The Senate voted Monday to override Hutchinson’s veto.

The House temporarily postponed a vote to override Hutchinson’s veto shortly after the alternative bill was approved.

The alternative bill now heads to the Senate, which could take up the measure shortly after midnight on Wednesday before wrapping up this year’s session. The Senate is also considering a competing measure aimed at addressing the concerns about the vetoed gun nullification bill.

Hutchinson didn’t say whether he would sign the House-backed bill, but said it has protections for law enforcement.

“I want to leave it to the General Assembly to see whether they can get that passed and do no harm to law enforcement, which is my goal,” Hutchinson told reporters.

The House-backed measure prohibits state or local officials from enforcing any federal restrictions that conflict with the state Constitution’s right to bear arms or any other state law. Under the measure, elected officials who violate the prohibition could be charged with an unclassified misdemeanor while law enforcement officers could lose their certification.

The head of the state prosecuting attorneys association, which had urged lawmakers to uphold Hutchinson’s veto, said the reworked measure addresses the group’s concerns that the original nullification bill would have jeopardized ongoing criminal cases.

The executive director of the Arkansas Sheriffs’ Association, which opposed the bill Hutchinson vetoed, said the group did not oppose the reworked bill the House passed.

Lawmakers in more than a dozen states have introduced similar bills this year seeking to nullify federal gun laws. Several states passed nullification laws under then-President Barack Obama, but judges have found them unconstitutional. So far, Arizona and Montana have enacted similar nullification measures this year.

Opponents have said the efforts are unconstitutional and will mislead people that the state has the power to declare federal restrictions invalid.

“We are forgetting and neglecting a fundamental truth,” Democratic Rep. Ashley Hudson said. “We as a state legislature do not legislate federal policy.”