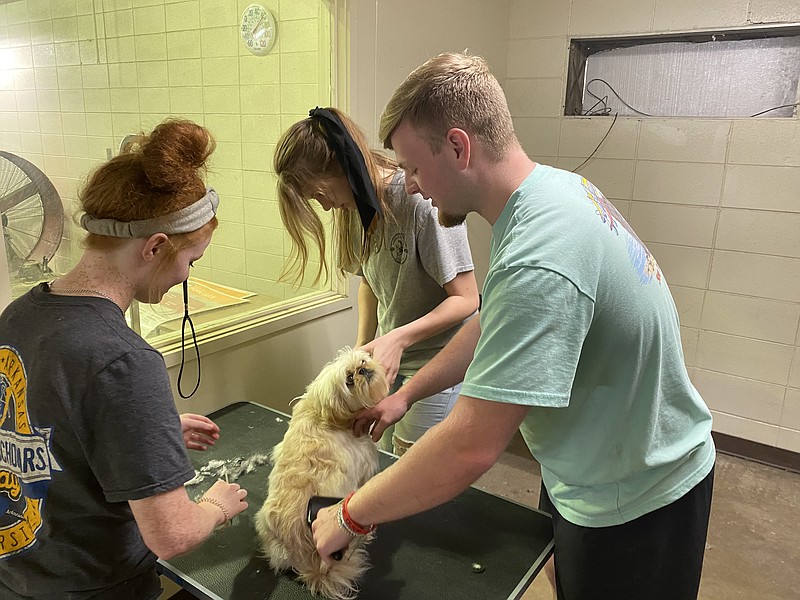 (From left) Alexis Lewis, Emily Kelly and West Hagaman work together to groom a pet at the Panthers’ Pet Spa.

Throughout the course of the Spring semester, students of the advanced animal science class in the Magnolia School District have participated in the Panthers’ Pet Spa as an opportunity to gain their groomer certifications.

Students at the Panthers’ Pet Spa undertake multiple tasks to complete the full grooming of the dogs they receive, including bathing, brushing, clipping nails and cutting hair.

“Originally it was just my four students in my 7th-period class,” said Agricultural Science Teacher Kelsey Leam. “Now I have around 15 to 20 kids signed up for it next year.”

Leam said she noticed other schools will give baths to dogs and other basic grooming and wanted to take it a step further with her class. She then got approval from the Arkansas Department of Agriculture for her students to groom dogs and gain their grooming certifications and began the Panther’s Pet Spa in January.

She stated that the pet spa has been very successful since it first began. She said in the early days, the spa would receive about four to five dogs a week. Lately, the spa takes in about three to four dogs a day.

“A lot of people forget that small animals are part of the Ag industry,” said Leam, “Companion animals are one of the largest parts of the agricultural industry, where vets primarily work on dogs and cats instead of livestock.”

Money made from the grooming are placed back into the pet spa for the purchase of shampoos, conditioners and equipment to continue with operations. Leam said that her agricultural business class has handled the financial operations of the spa and helped create the slogan and name of the business.

Emily Kelly, a senior at Magnolia High School, said that that the training she has received through the Panthers’ Pet Spa helped her groom her family’s pets.

“I plan on being a vet, and I will take the pre-vet courses at SAU then go to vet school,” said Kelly, adding that she might incorporate some of the grooming training she has received into a business later in life.

Leam said that the purpose of the program is to take students like Kelly who are interested in a career with animals by starting them with a hands-on experience in the agricultural department at Magnolia High School.

With its success, Leam said that the Panthers’ Pet Spa will continue on throughout the summer until classes begin in the Fall. To find out more information and to schedule an appointment, go to @PanthersPetSpa on Facebook and send a message.