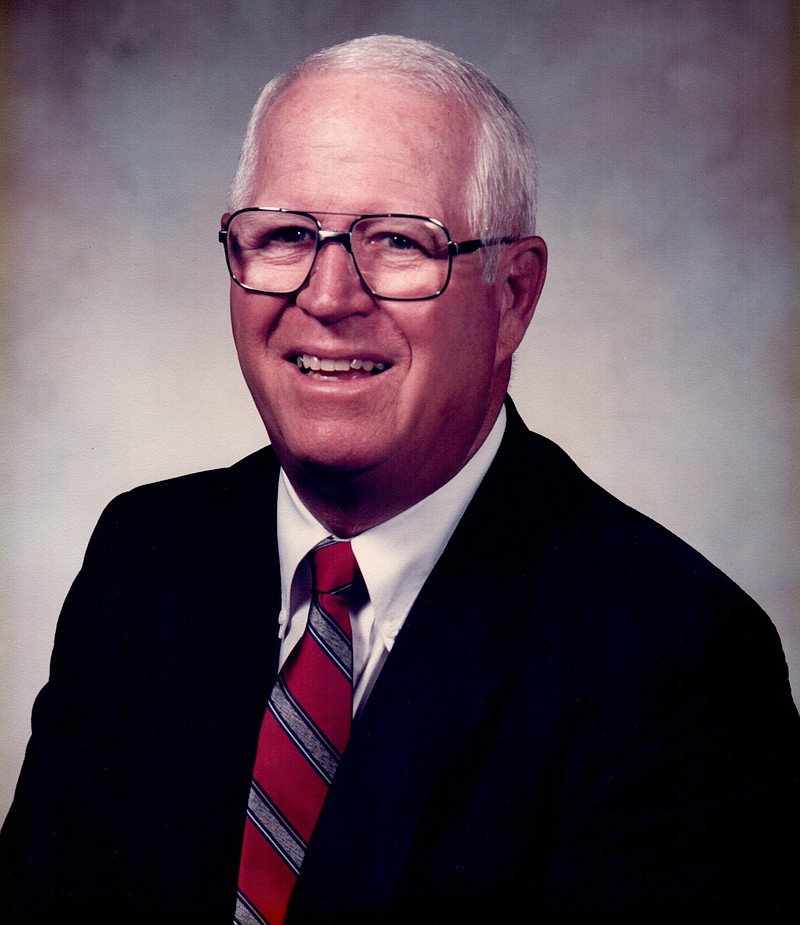 John was born on March 19, 1928 in Magnolia to the late Sam and Louie Maye (Falkner) Alexander.

John Ed grew up in Magnolia and attended Magnolia High school. He graduated a year early and attended Magnolia A and M. He also attended Oklahoma A and M and the University of Arkansas in Fayetteville where he lettered in baseball. He was accepted to University of Arkansas School of Medicine and graduated with a Doctor in Medicine degree in 1953. While in medical school, he met and married the love of his life, Mary. After internship At Missouri Methodist Hospital in St Joseph, MO, Air Force rotations and family practice he applied and was certified as a Charter Fellow in the American Academy of Family Physicians, 1973. Awards earned by John Ed include Eagle Scout, Order of the Arrow, Distinguished Alumni of Southern State College and Air Force award. John Ed was a member of First United Methodist Church in Magnolia and served on numerous committees over the years.

Dr. Alexander’s practice included all aspects of Family Medicine; he enjoyed delivering babies and taking care of the family as a whole. He was active with Magnolia Hospital staff, being Chief of Staff for several years. From 1988-1993 he practiced Emergency Room medicine, from 1994-1999 the Rural Health Clinic. He participated in his Medical School class affairs until just this previous summer sending letters of information and concerns to the fellow classmates and receiving a 50 and 60-year certificate of participation. The following is a letter he wrote to be included in the UAMS Golden Album (1953-2003) for his fellow classmates:

“Dear Mel, after medical school we all went into the Air Force or the Army. I had a real good tour in the Air force. I worked in the Flight Surgeon’s office and delivered babies every other night with an OB/GYN trained at Johns Hopkins. When we got out of the Air Force, Mary, and I with 4 children moved back to my hometown for a solo practice. I did a family type practice and delivered lots of babies and really enjoyed it. In 1983 my oldest son came back to Magnolia and did Family Practice with me until I retired in 1988. We had a real good family practice together and enjoyed working with my son. After I closed my office in January 1988, I worked at Magnolia Hospital Emergency Room a couple of nights a week for 5 years, followed by opening a Rural Health clinic for the hospital. I completely retired in 1994.

I played a lot of golf in the summers, hunted with friends and my son in the winters. In 1977 I began raising cattle, and saddle horses and mules. I had always had a lifetime love affair with mules, so I still play with and keep 2 teams of mules. Mary and I were very lucky and have 5 children, and seven grandchildren. Mary and I have attended lots of softball and baseball, tennis, and football games over the years.

Our kids and I have played tennis and golf together as well as hunt, fish, ride horses and haul hay. Our family still gathers here for special occasions and we have 17 to feed!

Mary and I are in good health, attend church at First United Methodist Church here in Magnolia and enjoy spending time volunteering at church, especially at the Stew Pot Ministry.

I appreciate the effort you have put forth on this and I am like you I think this will be a nice thing to look back on in our golden years.

The family wishes all the memories we have and have heard could be shared with our friends. He enjoyed time off for family vacations with grandparents, cousins, and friends to baseball games, including many trips to the Astrodome, golfing, and swimming at the beach. He enjoyed his mules, horses and fair parades with buggies and wagons, with his horse riding friends. He loved his Mules and More magazine and read it front to back each month always on the lookout for the perfect mule, gaited, spotted, with 4 white stockings. He and our Mom loved watching sports on TV. They both knew all the teams and players, baseball, golf, football and more. Each afternoon, he would go to coffee with his friends, and they would discuss all aspects of life in and around Magnolia from the earliest days to the present. He enjoyed their company tremendously. He still had an active role in his farming. He would advise we kids on what to do and when. He helped us keep the horses and mules healthy, the fences fixed, and the hay baled and stored. We tried to do the things that he would do at the farm. When we would drive out to feed each afternoon with him, he would tell us to roll down the window and he would call the horses to come in to eat and they would always come running to the car.

Viewing and signing of the guest book will be Sunday, April 18 from 1:00 to 5:00 p.m. at Lewis Funeral Home, Inc. in Magnolia. A graveside service will be held on Monday, April 19 at 10:00 a.m. at the Magnolia Memorial Park Cemetery followed by a memorial service at 11:00 a.m. at the First United Methodist Church with Rev. Gary Maskell officiating.

Thanks goes to the Southern Caregivers for their help these past few months.