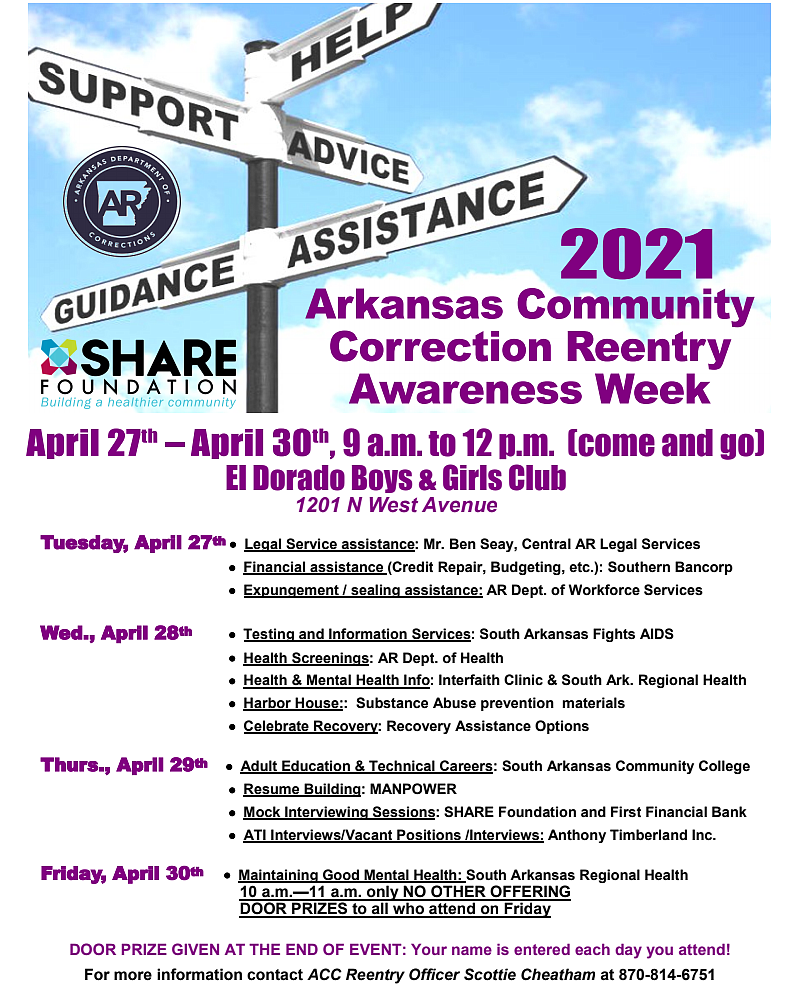 The Arkansas Community Correction (ACC) will be holding its Reentry Awareness Week next week, April 26 through April 30.

The ACC will host numerous events across the state to raise awareness about the importance of reducing the number of former offenders who return to prison after they’re released.

According to the proclamation, over 82,000 adult offenders are currently incarcerated in state facilities or on parole or probation.

“At least ninety percent of state prison inmates will be released from prison at some point in their sentence, but they can face obstacles long after their incarceration ends,” the proclamation reads. “A criminal record can create barriers to rejoining the workforce; finding adequate housing; securing transportation, and meeting financial obligations. These barriers contribute to more than fifty percent of offenders returning to prison within three years of release.”

“We are so thankful to the governor, he has been so passionate about this cause,” Kerri Koucerek, ACC employment specialist, said. “Also, getting the faith-based communities involved has been important. That is a huge aspect in helping to break the stigma around the formerly incarcerated and help the community realize that this is a person, not a crime. This is a person that we can help.”

Carrie Williams, ACC assistant director of reentry, broke down how there can be a continuous cycle for offenders if someone doesn’t take a chance on them and lend a helping hand.

A lot of the events that will be happening during the week will provide resources to help prior offenders with getting documents and identification they need to re-enter into a community and allow them to apply to jobs and for housing, Williams said.

“It takes a village,” she said. “A lot of this is about education. So many people don’t know or understand how to get involved… but I recommend just getting out there, get your church involved. We need volunteers, we need people to step up and walk along somebody.”

Debbie Watts of the SHARE Foundation expressed her excitement in assisting the ACC in launching Reentry Awareness Week.

Reetry is one of the SHARE Foundation’s six focus areas in its Violence Intervention Plan, an ongoing effort to reduce violence in Union County. Over the past several years, grants have been given to local community organizations like Magdalene House and Hannah Pregnancy Resource Center to help offenders successfully reenter the community.

SHIFT Recovery Ministries and Wings of Love are also dedicated to reentry of people who were formerly incarcerated.

The El Dorado Reentry Awareness Week events will be held at the Boys and Girls Club on 1201 N. West Ave, from 9 a.m. to noon on April 27 through April 30.