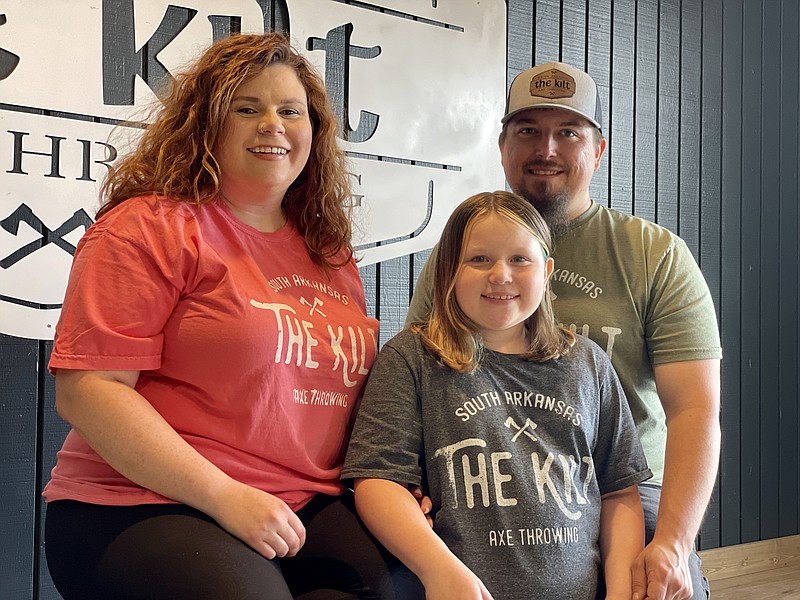 Ryan and Angela Thomas, along with their daughter Madelyn Johnson, have recently opened The Kilt-South Arkansas Axe Throwing at 2006 North West Ave.

They shared what inspired them to pursue the new business venture.

“Normally we take vacation out of the country, but with COVID we couldn’t do it. So we allowed our daughter to pick where she wanted to go, and she wanted to go to Branson (Missouri),” Angela Thomas said. “They have axe throwing there and my sister-in-law and I joked that we should quit our jobs and do this for a living. Our husbands said, ‘we can do this.’”

Angela Thomas said the conversation about starting an axe throwing venture came up again two weeks after their Branson vacation.

“In August (2020), we were in Branson; by September, our accountants and attorneys had all the paperwork done and all we had to do was settle on a location and reach out to the Chamber here,” Thomas said.

Ryan Thomas and his brother-in-law delivered on their promise.

“I’ve been in maintenance for ten years,” Ryan Thomas said. “I’ve worked at a sawmill… I’ve always been mechanically inclined, and we started by building a target at our house and that turned out great, so we started looking for a place to do more.”

The skills that Ryan Thomas has picked up over the years are apparent as soon as one steps into The Kilt. A wall of wood targets, separated into individual stations, anchor the entire left side of the facility.

He showed immense pride in the craftsmanship throughout the space, even demonstrating the proper form and technique for axe throwing and hitting a bullseye on his first go.

Ryan Thomas, along with his wife and daughter, serve as axe throwing coaches for patrons, and said they hope the El Dorado community will come out and give axe throwing a try. They also said they want to meet members of the community, as making connections locally is really important to them.

“We’re really big on giving back to the community. Just about every weekend we have some sort of fundraiser for the community,” Angela Thomas said. “Every Thursday we do community heroes, where we take five dollars off a ticket and that’s for teachers, first responders, ministers, service members, anyone the community sees as a hero.”

The Thomases said they will be hosting league events and encouraged those interested in joining to look into the league.

The business is currently planning an upcoming ribbon cutting with The El Dorado and Union County Chamber of Commerce, and the couple said they look forward to introducing more and more people to the exhilaration that comes with axe throwing.

“We’ve had a lot of team building with people that come… We’ve had so many businesses stop doing team building activities because of COVID, but with our business, you can spread out, be safe and still have team building,” Angela Thomas said.

[Video not showing up above? Click here to view » https://youtu.be/OEKoYjtebA8]