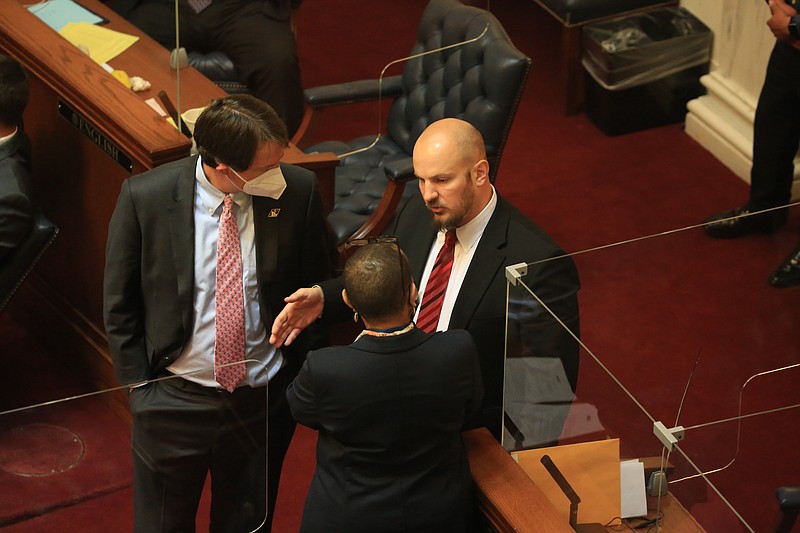 A bill that would prohibit vaccine passports in Arkansas passed the Senate Public Health, Welfare and Labor Committee on Wednesday.

Senate Bill 615, sponsored by Sen. Trent Garner, R-El Dorado, would prevent state and local officials from requiring “an individual to use a vaccine passport in this state for any purpose.”

While Garner said there has not been an issue with vaccine passport requirements in Arkansas or neighboring states, his bill is a preemptive measure to stop what he called “one of the most dangerous things that could come out of the COVID-19 pandemic.”

“The idea for you to live your day-to-day life, to show a piece of paper to show that you’ve been vaccinated is frankly un-American,” Garner said. “It goes against what we’ve done in our history for the last 200 years.”

Garner said his bill will not only prevent government officials from requiring people to present proof of vaccination, SB615 would also likely ban private businesses from using them to deny someone a good or service they typically would provide.

“So, similar to how you can’t deny somebody based on their race … this would be the same thing with the vaccine passport,” Garner said.

Officials from the Arkansas Department of Health testified against the bill at Wednesday’s hearing, saying the language in the bill was too vague and that it sent the “wrong message” to the public about vaccines.

“We just think that this bill sends the wrong message and that businesses should be able to have the decision,” said Laura Shue, general counsel for the Arkansas Department of Health.

Garner presented an amended version of the bill Wednesday that deleted a reference to denying someone employment as one of the things a vaccine passport could not be used for. Business leaders objected to that provision, meaning employers could still require their employees to be vaccinated, he said.

Vaccine passports have become a contentious issue as public health officials and others around the country have debated whether showing proof of vaccination against COVID-19 should become a requirement for some services.

Gov. Asa Hutchinson said last week he didn’t plan on trying to block private businesses from using vaccine passports, saying the decision should be up to them.

“I don’t think that it should be a condition of travel, so I think you have to hesitate about that, but I want everybody to get vaccinated, and I know that there’ll be some venues that will require vaccination,” Hutchinson said.