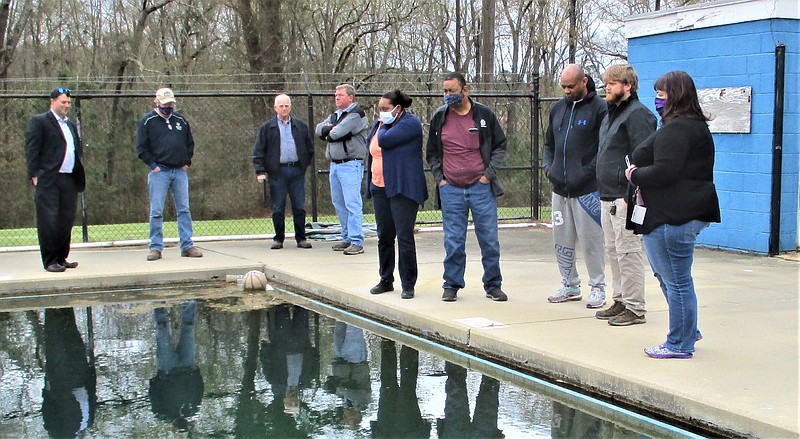 It has been nearly three years in the making and today, the El Dorado Parks and Playgrounds Commission is expected to shoot its shot by presenting a funding request to the El Dorado Works Board for improvements and upgrades to several city parks.

The EWB will meet at 5:15 p.m. in the Council Chamber of City Hall.

The EPPC will meet 30 minutes prior in the same location to go over last-minute details of the presentation, which is broken into two phases.

Per the most recent draft of the plan, the first phase includes a total ask of $371,360 for:

• $207,360 in equipment purchases, including a greens roller, greens sprayer, sweeper, sod cutter, small backhoe, fairway mower, utility cart, aerator and dump trailer that would be used at Lions Club Municipal Golf Course, the recreation complex and as needed at other city parks.

• $164,000 to asphalt the 2.25-mile recreational trail that encircles the golf course, Union County Fairgrounds and the El Dorado School District soccer fields and to add a water fountain for people and pets.

Parks and playgrounds commissioners previously said they are still gathering details, including price updates, to tweak the plan.

Last December, the EPPC presented a $993,450 funding request to the EWB for phase one projects and additional improvements, including public restrooms in city parks.

However, the EWB asked for additional details, including which park the EPPC expects to start with, how many parks are included in the plan and a timeline for completion of the improvement project.

The EPPC agreed to do some fine-tuning and return to the EWB later with a revised proposal.

The board has since inquired about more specific information, including financial statements for the municipal golf course, if the EPPC has researched and/or pursued grants for any of the work and a contingency plan for how to proceed if funding is exhausted before the work is completed and how to replace equipment in the future.

Parks and playgrounds commissioners previously agreed to split the improvement project into two phases, with the second phase calling for:

• Resurfacing the tennis courts in Mellor Park and striping the courts for pickleball.

• Fencing, leveling, hydro-seeding and irrigation for the field in Neel Park. The field is used heavily for soccer.

Commissioners are also considering McKinney Park on East Beech Street as a soccer park with leveling and hydro-seeding, saying that they plan to speak with local soccer leagues about the idea. McKinney was decommissioned as a city park and designated as green space in a master parks plan that was drafted for the city in 2008.

Also under consideration is the expansion and relocation of the basketball court that sits near the entrance of Lions Club.

The improvement plan has been under development since the fall of 2018 when the EPPC toured several city parks to assess and identify needs.

The group also solicited ideas from the public.

The El Dorado Works Board administers the one-cent city sales tax that is earmarked for economic development, municipal infrastructure and quality-of-life projects.

The board vets proposed projects, and if approved, the proposals are then forwarded to the El Dorado City Council for final consideration.

The EPPC and EWB meetings that are scheduled for today are open to the public. Face masks and social distancing are required in City Hall.