Aiming big, Biden is looking to restore faith in government 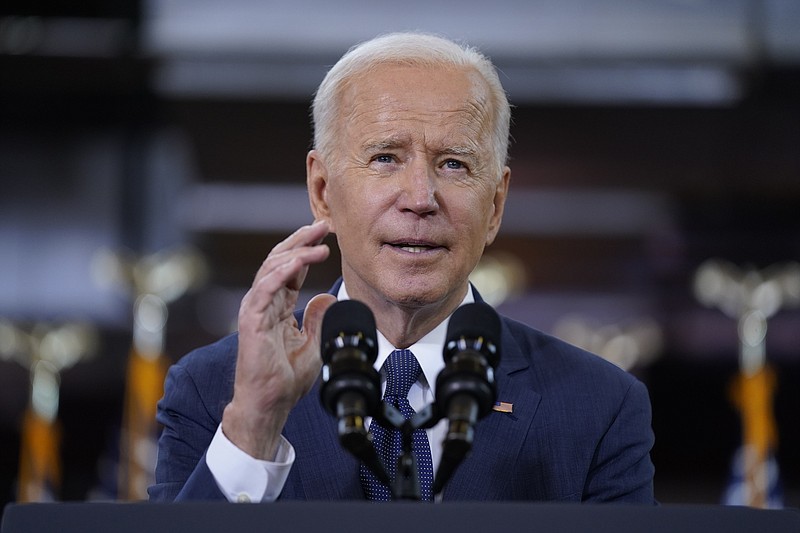 WASHINGTON (AP) — As President Joe Biden preaches patience but acts with urgency, his vision of the powers of the Oval Office is quickly taking shape, modeled after Democratic predecessors who dramatically expanded the reach of government to confront generational crises.

In a recent meeting with historians and in private conversations with advisers, Biden looked to the examples set by Presidents Franklin D. Roosevelt and Lyndon Johnson as he aims to use the levers of executive authority to create opportunities and break down barriers.

Unlike Roosevelt and Johnson, who enjoyed formidable Democratic majorities in Congress, Biden has had to operate with a no-margin-for-error edge in fiercely partisan Washington. 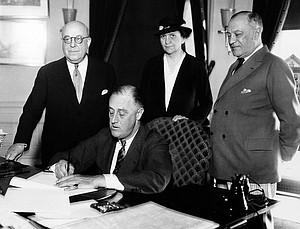 Born soon after Roosevelt’s New Deal and having first run for office in the shadow of Johnson’s Great Society, Biden has long believed in government as an instrument for good. Now, with the COVID-19 public health pandemic and the economic carnage it wrought, that philosophy is being put to a fundamental test and Biden’s place in history is in the balance.

He has chosen momentous action over incremental, willing to cast aside visions of a bipartisan Washington in favor of tangible results Biden insists are resonating with Republican voters, if not their elected officials.

“The president was clear about the crisis of democracy and aware of the factors and forces that may try to undermine the American experiment if we are not careful to protect it,” said historian Michael Eric Dyson, who attended the recent session. “There was no question that the president was concerned about how we treat our fellow citizens and is keenly aware that the moral trajectory of the United States has made a difference in both domestic and foreign policy.”

Over his first two months in office, Biden has signed into law a $1.9 trillion COVID-19 relief bill and, this past week, proposed an even larger $2.3 trillion infrastructure and tax plan that is the first installment of a two-part legislative package meant to reshape the American economy.

His team’s guiding principle is that the United States must push past the pandemic and the Jan. 6 insurrection at the Capitol to rebuild the economy in an equitable way that shows the nation can still make good for its citizens as it faces a threat from autocratic states, including China, for global economic supremacy.

“There’s a lot of autocrats in the world who think the reason why they’re going to win is democracies can’t reach consensus any longer; autocracies do,” Biden said Wednesday when he announced his infrastructure plan in Pittsburgh.

“That’s what competition between America and China and the rest of the world is all about. It’s a basic question: Can democracies still deliver for their people? Can they get a majority?” Biden continued. “I believe we can. I believe we must.”

The president has urged action despite a very narrow Democratic majority in the House and a 50-50 split in the Senate that requires Vice President Kamala Harris to break ties. No Republican lawmakers voted for the COVID-19 relief bill, although it was popular among voters of both parties.

No Republicans appear likely to support the infrastructure plan.

To this point, the White House has refused to entertain the debate that often bedevils presidents who know their party traditionally loses seats in their first midterm elections: play it safe to try to preserve power or go big?

Biden’s bet for the latter is clear, banking that voters will ignore big price tags and reward tangible results on vaccines, roads, broadband and more while forcing Republicans to defend a tax structure that benefits ultra-wealthy companies.

Even so, the progressive forces in the Democratic Party that helped elect Biden are already pushing the president to go bigger still, demanding immediate action on gun control, immigration and climate change.

Biden is asking for patience, keenly aware of the arithmetic of the Senate and the headwinds he’ll face on some issues. But the 78-year-old president also has pressed for urgency, knowing that his party’s hold on Congress is tenuous and believing that now is the moment to restore a wary public’s faith in government.

This past week, House Speaker Nancy Pelosi, D-Calif., framed Biden’s gamble as “in the tradition of America — to think big.”

Biden has indeed looked to history for guidance.

A month ago, he gathered more than a half-dozen historians in the East Room of the White House and listened to each speak about what made previous presidents successful and what lessons could be drawn for the present.

“This is a president who obviously loves history and has used history all of his life and his career,” said presidential historian Michael Beschloss. “He knows all about 1933 and 1965. We have seen evidence of that his whole career.”

Biden’s infrastructure package would go well beyond the usual commitments to roads and bridges to touch almost every part of the country. It’s a down payment on combating climate change, a chance to take on racial inequities, an expansion of broadband, an investment in manufacturing and a reorienting of corporate taxes to pay for everything.

The opposition will be fierce. Republicans have already balked at its scope and the taxes that would finance it.

“This is a bold, left-wing administration,” said Sen. Minority Leader Mitch McConnell, R-Ky. “I don’t think the American people gave them a mandate to drive the country to the political left.”

Though the White House has said Republican input is welcome in crafting the infrastructure plan, it has hinted that, like it did for the COVID-19 aid bill, it is willing to use the legislative process known as reconciliation to pass the plan with a simple Senate majority rather than the usual 60-vote threshold.

Action on other Democratic priorities such as a voting rights bill, may require altering or scrapping filibuster rules. It’s a dramatic move that Republicans have warned against, but Biden, a Senate institutionalist at heart, has signaled he may support.

“The country is in a place to do serious things rather than tinkering around the edges,” said White House senior adviser Mike Donilon. “The country wants to deal with the fundamental issues that have been ignored for a long time. He wants to deliver for the country and seize the moment in a real serious way.”

Biden inherited a series of crises from his polarizing predecessor, Donald Trump, including a nation’s renewed reckoning on race and equality and a pandemic that has killed more than 550,000 Americans and shaken the economy. Biden has told advisers that the moment is more than a test for the nation but for democracy itself.

He has said that the United States’ defining international relationship for the decade ahead will be China. That fuels the White House push to spend big not just to compete in the global marketplace but to blunt the rising forces of autocracies that sacrifice human rights in favor of efficiency and expansion.

“The administration believes it needs to take care of matters at home in order to advocate for democracies abroad: They need to be able to walk the walk before they can talk the talk,” said Richard Haass, head of the Council on Foreign Relations. “The question it faces: Can democracies deliver competent government?”