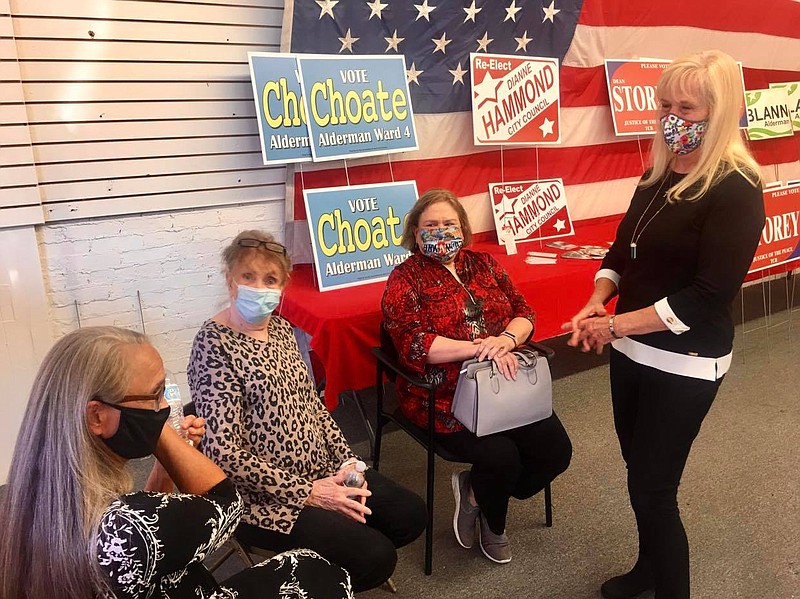 The Union County Republican Party held a meet and greet with local candidates at their downtown headquarters on Sept. 29.

While a lot of attention outside the headquarters was on national politics and anticipation for the first presidential debate, the Republican candidates in attendance wanted to focus on the issues that are specific to El Dorado.

“National issues are important but we have so many local issues here: streets, water, recycling and safety to name a few,” Billy Blann, El Dorado City Council member for Ward 1 - Position 2 said.

“Forty-two hundred cars a day on average travel on and through West Fifth Street. It is so narrow and safety is constantly an issue there,” Hammond said.

Visitors came in and out of the headquarters to ask questions of the candidates. The venue was decked out in local Republicans’ lawn signs, banners for President Trump and American flags, something that brought a smile to State Committeeman Steve Ward’s face.

“This is a time to celebrate and rejoice,” Ward said. “I remember in the 90s we didn’t have much of a Republican party here, so to see how far the party has come here in El Dorado is great.”

Paul Choate, El Dorado City Council member for Ward 4 - Position 1 was also in attendance and said he was happy to be there.

“This is great. I’m seeing and meeting several people I’ve never met before,” Choate said. “It is great to have an event like this where people can come and meet us and ask questions they may have. We are here to serve the constituents.”

The Republican Party of South Arkansas is hoping for a sweep come November, not only in South Arkansas but across the state and in the presidential election.