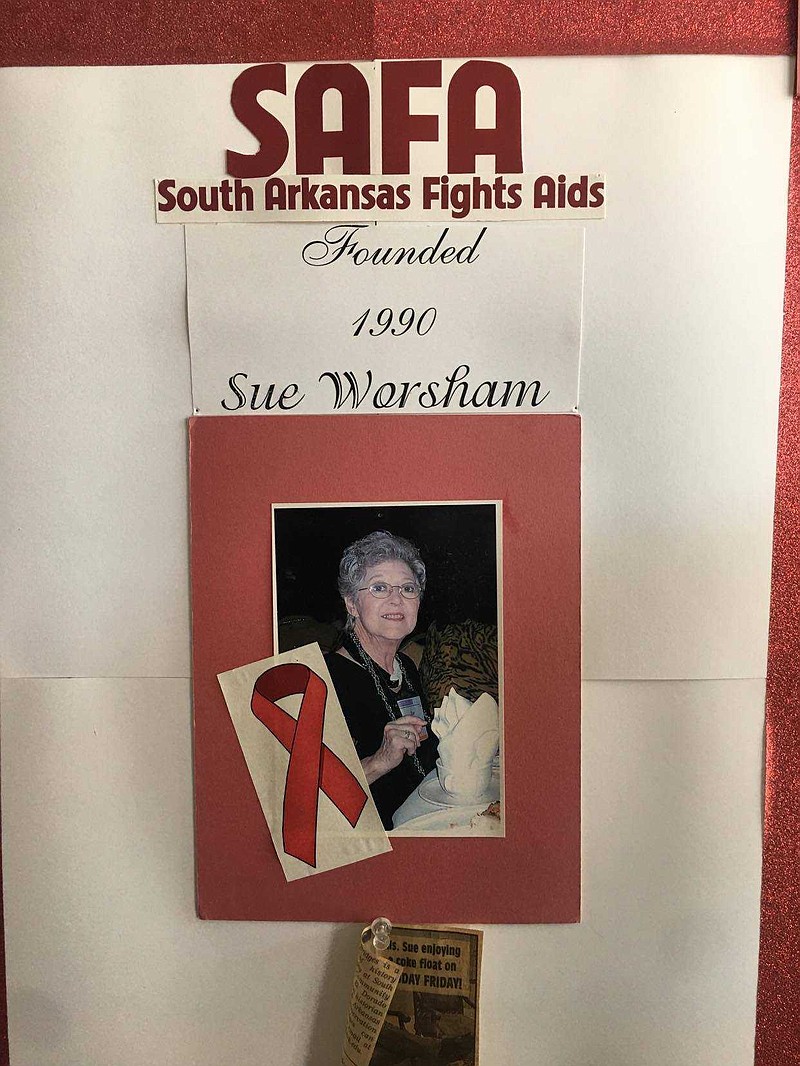 SAFA’s founder, the late Sue Worsham, always had to make do with very little and small spaces. She started South Arkansas Fights AIDS in September of 1990, operating from the trunk of her car. (Marvin Richards/News-Times)

When you drive up to South Arkansas Fights AIDS (SAFA), you will see a small brick storefront with red lettering in the window displaying its name. Though the space this non-profit organization works out of is small, the cause they support is mighty.

SAFA’s founder, the late Sue Worsham, always had to make do with very little and small spaces. She started South Arkansas Fights AIDS in September of 1990, operating from the trunk of her car. September marks the thirtieth anniversary of SAFA and the strides the organization has made in Union County towards combating the spread of HIV/AIDS and educating community members on the importance of safe sex.

Thirty years ago, the stigma and unknowns around HIV/AIDS made Worsham’s efforts hard, sometimes near impossible. But with the support of her late husband Fred and a request from her late son Freddy Worsham, who would go on to die from AIDS, Sue Worsham was determined to carry out his last dying wish.

“My mom (Sue) begged him (Freddy), ‘what can we do to help you?’ And Freddy replied, ‘there is nothing you can do for me. But what you can do is educate people because nobody should die from AIDS,’” Sue Worsham’s daughter, Vicky Worsham DeLone said.

With these last words from Freddy in mind, Sue Worsham reached out to local schools and churches so that she could do the necessary education and outreach around HIV/AIDS. And though some were receptive to her offerings, some didn’t want her help as the virus was then viewed as a ‘gay’ disease and something other folks don’t have to worry about.

Current SAFA director Janet Beane shared a story of how this tension came to a head for Sue Worsham.

“Sue was a Sunday School teacher for thirty years at her church. But one Sunday she asked the ladies in attendance, ‘is there anything else in scripture that you all know to discuss? Because it seems every Sunday, homosexuality is the only thing you all like to discuss.’ And after that Sunday, Sue never went to Sunday School ever again,” Beane said.

This was frustrating to Sue Worsham because she knew education and dialogue was instrumental in combating the spread of the virus. And with Arkansas being a state that does not require school districts to have sex education, she knew she could not let up on the importance of knowledge around sex and HIV/AIDS.

She even met with Jay Dickey, former Republican representative for the Fourth Congressional District to push for education and funding in March of 1995. At that time, Dickey voted to rescind $23 million for AIDS research and prevention and $13 million for treatment. After the discussion with Dickey, Sue Horman later told the News-Times education way key to stopping the spread of HIV, the virus that causes AIDS.

“Education is the only vaccine we have and we would like to see this mandated for all public schools that receive federal funds,” Worsham said.

Jay Dickey would later vote to restore funding for research and treatment, a big victory for SAFA and the state at large; but the widespread education piece was still a no go.

Sue still didn’t let that stop her. She continued to go to schools and churches that would have her, doing interactive puppet shows where students got to act out different scenarios. Students then would get to ask questions and Sue glady answered and shared all the knowledge that she could around safe sex and HIV/AIDS.

Worsham and SAFA would fundraise with their popular auction, “Artists on Denim,” a benefit auction featuring one-of-a-kind jean jackets by local artists and designers. Some jackets would sell upwards of $500 a piece, and over the course of one event, SAFA would raise close to $10,000. It is private donations like this, grant money, and sponsorships that allowed Worsham to do the work that state policy makers were not willing to do.

What Sue Worsham and SAFA did was unprecedented. In the 90s, South Arkansas Fights AIDS was one of the few organizations in the South with the sole purpose of raising awareness on HIV/AIDS, a fact that led to Worsham being called to take her message across the country.

“She got a call from DC and a group up there wanted her to come and speak about SAFA. She (Sue) says, ‘Oh honey, I’m just a little ole housewife from South Arkansas, you probably want to get someone else,’” Vicky DeLone said. “The man told her, ‘no, we want you. We heard about you and we know that you have lived it and breathed it with the work that you do.’ So my mom started traveling to places like DC, Colorado and California to further her work on HIV/AIDS,” DeLone added.

After doing this work for years, Sue Worsham retired in 2011, but would remain a welcomed presence within the organization. Worsham died on August 5 at the age of 91. She leaves a legacy and organization that will continue to do the all important work around HIV/AIDS; especially with Union County still falling within the top ten of counties in Arkansas with new cases each year.

In the back of a photo album that sits in SAFA are hundreds of index cards with personal messages to Sue and the organization. The sheer number of cards show how beloved she was by the community.

One reads, “Sue, Freddy I think would be pleased with the way you have made the public aware of HIV, you have honored him,” an acknowledgement of Sue accomplishing the last wish of her son and being the catalyst that led to South Arkansas Fights AIDS.

SAFA encourages anyone wanting more information on HIV/AIDS to come in. They offer a monthly food pantry for disabled clients, and free HIV anonymous testing with pre- and post-test counseling.