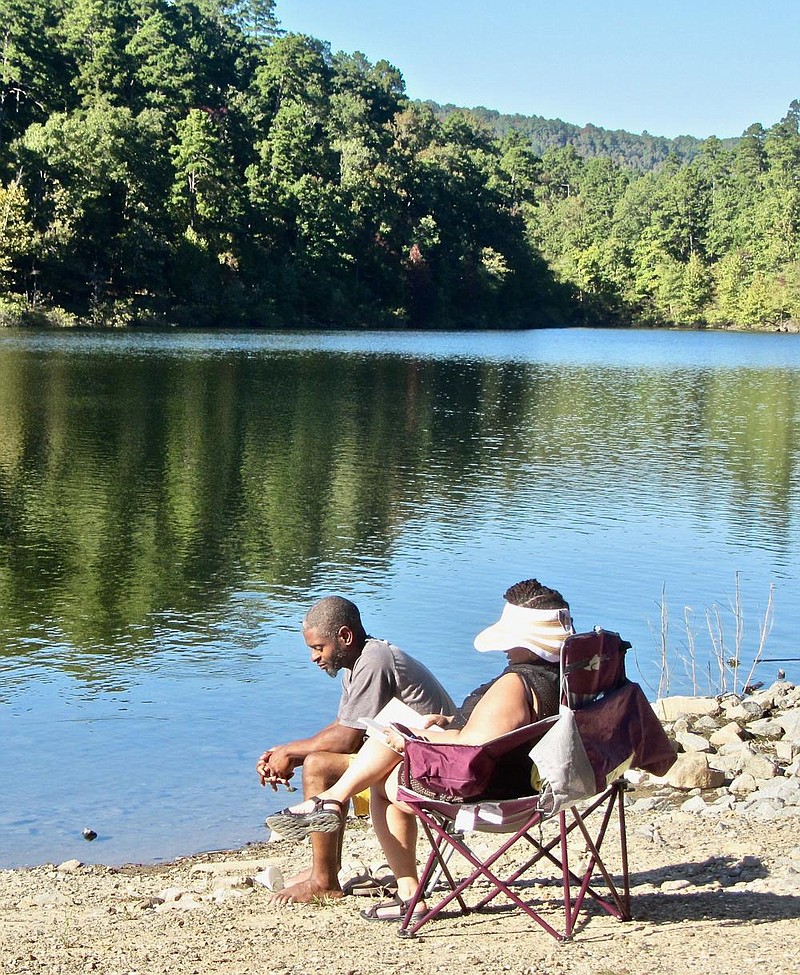 October at Lake Ouachita State Park can be a pleasant time for sunning. (Special to the Democrat-Gazette/Marcia Schnedler)

As the social-distancing mandate remains in force, reliably safe settings for outdoor fun this fall include any number of Arkansas’ 52 state parks. They offer ample space to hike, bike, boat, picnic and otherwise enjoy the cooler weather. A bonus is the looming advent of colorful autumn leaves.

Two visitor favorites, near Hot Springs and an hour or so from Little Rock, are Lake Catherine State Park and Lake Ouachita State Park. They’re busy enough on fall weekends that both post a caution online:

“This is one of our busier parks. If our parking lots are full, the park is at capacity and we will be monitoring entry to the park. We invite you to come another day or visit one of our other less busy state parks.”

So it makes sense to come as early as possible on Saturdays and Sundays, or to show up on a weekday if possible. In any case, there will be plenty of room to roam safely once you are out of the parking lot and away from the visitor center.

Lake Catherine is the oldest among a number of Arkansas state parks situated around man-made lakes. In 1924, the pioneering Remmel Dam created 1,924-acre Lake Catherine. Harvey Couch, founder of Arkansas Power & Light Co., gave the state land in 1935 to create a park. It now encompasses 2,240 acres.

During the Great Depression in 1937, the federally created Civilian Conservation Corps began building park facilities. German prisoners of war from the North African campaign completed some structures in 1944-45.

At the park’s south end are three trails branching from a single starting point. Part of the Arkansas Trails System, they are marked with eye-level rectangles painted on trees. Even in cooler autumn weather, it is advisable to carry water while walking.

There is pleasant hiking as well in Lake Ouachita State Park, where the four-mile Caddo Bend Trail runs along the shore to the west of the visitor center. An overlook near the tip of the peninsula offers lovely sunset views across the lake. The trail’s geological highlights include Paleozoic sandstone layers, shoreline caves and quartz outcroppings.

Decades before the damming that created Lake Ouachita, another kind of water made a big splash in the area. Preserved in a historical site a bit east of that park’s visitor center and busy marina, it is known as Three Sisters Springs.

This underground source infused with minerals was sold locally and around the nation as a purported cure for a host of ailments. Water still bubbles up in the native-stone pavilion that shelters the springs, although a sign warns that “the water is not drinkable and is classified as non-potable.”

It was definitely drinkable in the late 19th century, when the Hot Springs area became a widely known health resort. As noted on park signs, water from Three Sisters Springs was first claimed to be curative by homesteader John McFadden in 1875. For the next three decades, under several owners, visitors pitched their tents around the open pools.

Spring No. 3, for example, was to be used “only for diarrhea, dysentery, cholera-infantum and kindred troubles, bath for diabetic sores, eczema, granulated and sore eyes, catarrh of the head, nose and sinuses, etc.”

The Great Depression crippled Cecil’s business, and he sold the springs in 1939. The site was bought in 1951 by the U.S. Army Corps of Engineers as Blakely Mountain Dam was being built to create Lake Ouachita. Today, the lake’s 40,000 acres are stocked with bream, crappie, catfish, striped bass and largemouth bass.

As fall foliage unfurls its colors, Lake Catherine and Lake Ouachita are sure to be brimming with visitors. That makes early arrival on weekend days an even better bet. There’s no charge to visit either park. For information on lodging and camping, visit arkansasstateparks.com.