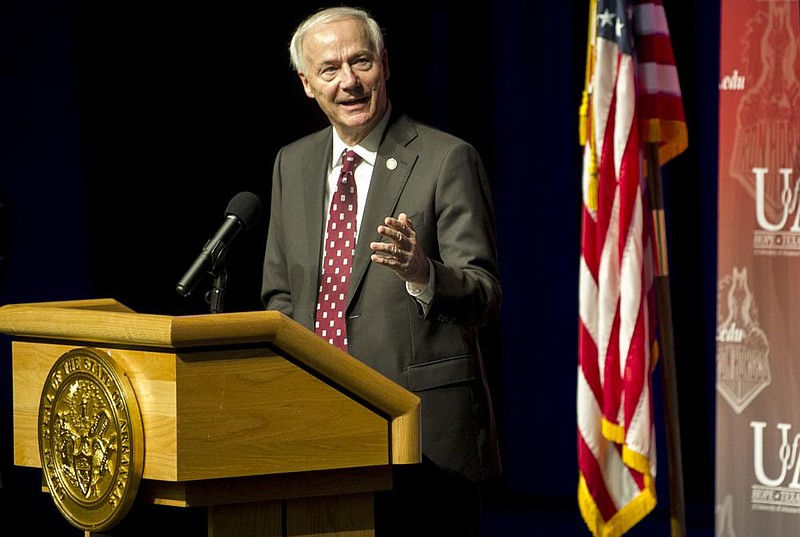 Governor Asa Hutchinson addresses the media from Hempstead Hall Theatre at the University of Arkansas Hope-Texarkana during his weekly update on Arkansas’ response to COVID-19 on Tuesday, Oct. 13. (Arkansas Democrat-Gazette/Stephen Swofford)

The Arkansas Department of Health reported 14 new COVID-19 cases in Union County Tuesday, bringing the cumulative number of cases identified locally to 1,024. The cases in the county Tuesday included 948 confirmed cases, up 12 from Monday, and 76 probable cases, up two from Monday.

No new local deaths attributable to COVID-19 were reported Monday. Forty-seven Union County residents have died as a result of the virus. In the Southwest Public Health Region of the state, where Union County is located, 107 people were hospitalized due to the virus Tuesday, including 48 in intensive care units and 21 on ventilator support.

The ADH reported 18 new negative test results returned from Union County Tuesday, indicating a one-day local positivity rate of 43.8% based on the number of new cases and results reported. In all, 11,335 COVID-19 test results have returned from Union County, including 10,311 negatives, indicating an overall local positivity rate of 9%.

Governor Asa Hutchinson gave an update on the pandemic Tuesday, noting that this week marks the seven month anniversary of his first emergency declaration regarding COVID-19 made on March 11.

“It seems to me to be symbolic that we are remembering this anniversary in Hope, Arkansas — a place called Hope,” he said. “So hopefully today’s meeting and discussions will be helpful for the future.”

Hutchinson said he planned to sign another executive order Tuesday to extend the state’s emergency declaration for another 60 days.

“I’m doing this because COVID-19 continues to be a global pandemic that’s costing lives, and globally, you actually see cases rising, but you also see here in the United States that the deaths and hospitalizations continue, that we have declared emergencies in all 50 states, so the emergency continues in Arkansas as well,” Hutchinson said. “I think every health care worker in particular would understand the need for this.”

The emergency declaration provides for students’ ability to opt into virtual learning, instead of on-site instruction, as well as liability protections for businesses, Medicaid reimbursement for telemedicine services and other changes to normal processes to allow life to continue in spite of the pandemic, Hutchinson said.

However, Hutchinson noted that in many of the state’s rural counties, cases have increased as more metropolitan areas have seen smaller growth in recent weeks.

“We know that in the rural counties in Arkansas, we are seeing an increase in cases … you can see many rural counties around the state that have a high rate of positivity,” he said. “You can see the shifting dynamics of the state, and it really is a lesson that if you’re in the rural parts of the state, sometimes you think ‘well, we’re not going to be touched by it.’ But as someone mentioned today, people move in and out — they’ll work outside the county and they’ll come back, or they’ll go and visit somebody and they’ll come back — so you have to be careful and mindful and socially distance to protect yourself.”

He said that the state is poised to hit a new record in testing this month, and invited Camden resident and chief executive officer of the Ouachita County Medical Center Peggy Abbott to speak about an initiative at OCMC that has helped raised that county’s testing rate.

Abbott explained that seven weeks ago, the OCMC added a designated testing site to the hospital’s campus and has offered testing to anyone who wants it.

“If you want a test, you get a test,” Abbott said. “That little community in Camden stepped forward and made available to our community and to anybody who wants to come.”

She said the hospital learned, through tthe testing intitiative that the county’s positivity rate was at nearly 10% and many of those who were tested were asymptomatic.

“Based on those numbers, we continue telling our community: wear the mask. This is our greatest safety net,” Abbott said.

Dr. Jennifer Dillaha, an epidemiologist for the ADH, also spoke during the update, urging Arkansans to get their flu shots sooner rather than later.

“Older adults and people with chronic health conditions are more vulnerable for both flu and COVID-19 to have severe disease, so for that reason, I urge all Arkansans to get a flu shot this year. It takes about two weeks for the flu shot to provide protective immunity, so I urge you to get it now so you will be protected by the end of the month,” she said. “We know that influenza can cause a lot of hospitalizations and the shot can do a lot to keep people out of the hospital, and that is exactly what we need to do right now.”

Hutchinson acknowledged that the state’s number of hospitalizations recently reached a new peak of over 600, saying that while the state does still have adequate capacity for patients in hospitals, he hopes to see the number of COVID-19 cases decline to ensure that capacity remains.

“They (hospital workers) manage it well and I’m encouraged by that. I know that our hospitals, with their level of coordination, give us adequate space even though I know it is still at the largest number we’ve had since this pandemic began,” he said. “Our hospital capacity can handle more, but we don’t want to put the pressure on the system.”

There were 84,804 Arkansans considered recovered from the virus Tuesday, up 749 from Monday. Active cases in the state dropped by 95 to reach 7,744, representing 8.2% of all the cases identified in the state. The active cases in Arkansas Tuesday included 6,744 confirmed cases and 1,000 probable cases.

The deaths of 25 Arkansans that resulted from COVID-19 were reported Tuesday, bringing the state’s death toll to 1,611, indicating a state COVID mortality rate of 1.7%. There were 601 Arkansans hospitalized due to the virus Tuesday, including 246 in ICUs and 105 on ventilator support.

Hutchinson said 5,909 PCR test results returned to the ADH Tuesday, as well as 1,472 antigen tests, indicating a one-day positivity rate for the state of 9.2% based on the number of new cases and results reported. Since the state began testing for COVID-19, 1,192,697 test results have returned to the ADH, including 1,098,033 negatives, indicating an overall positivity rate for the state of 7.9%.