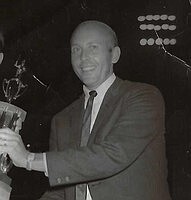 High school is not an entirely pleasant time to reminisce on for many people, wedged awkwardly as it is between childhood and adulthood. Still, connections formed while there, whether with teachers, faculty or friends, that can stay in place even decades later.

When Smackover High School Class of ‘53 alumni Lou Ella Humphrey and Gary Greene heard of the passing of their classmate and friend Sammy Halbrook, they initially planned to make a donation to the SHS Buckaroo Band in his name.

Halbrook was a lifelong musician who marched in the band as a student and, from 1963 until 1969, served as band director. The idea seemed a perfect way to honor man who spent his life pursuing an interest in music and sharing that interest with students.

Greene and Humphrey contacted the Smackover-Norphlet School District to make their donation and, according to Humphrey, worked with school administration to create the Smackover High School Band Activity Fund in honor of Halbrook.

“The fund is designed to assist in band activities where there may not be other funding options. The funds are administered at the discretion of the band director and the business manager at the school is the receiver and manager of the funds,” Humphrey said.

Humphrey remembered Halbrook as a talented musician who went on to continuing pursuing his craft after high school.

“Sammy was a product of Smackover Schools grades one through 12 and was a talented member of the band program. He earned a scholarship to the University of Michigan and was a member of their prestigious Marching 100 band,” Humphrey said.

Greene said Halbrook’s choice in college was specific and deliberate.

“He went to the University of Michigan and was enthralled with the band director up there. [Halbrook] saw it as important for his own future to go work with that band director,” Greene said.

According to both of the former classmates, Halbrook was seriously injured in a car accident during his freshman year at the University of Michigan.

“His dad flew him back to Arkansas on a small Cessna plane. It was a seven-hour flight, and myself and a few others were there when the plane landed. It was a sad thing to see, a 19-year-old strapped to the floor of a tiny plane like that. He came back to Arkansas for medical treatments,” Greene said.

According to Humphrey, Halbrook went on to recover and finish his college career in Arkansas.

Greene and Halbrook were close friends throughout high school and, for a time, even after.

“I met a young lady at the University of Michigan and in 1960 we asked Sammy to be the best man at our wedding… After that I don’t think I saw him again in person. He and I communicated a few times, but we moved around a lot,” Greene said.

Halbrook possessed rare and impressive musical talents, according to both Greene and Humphrey, and worked as an educator in Arkansas, Texas and Missouri.

“At one time he was band director at the Highland Park High School in Dallas, Texas, a school that has bagpipes in the band. Sammy became adept at transposing band music to accommodate bagpipes. Baylor and Notre Dame were playing and the coordinator for the half time show wanted a combined Baylor and Notre Dame marching band complete with bagpipes and Sammy was asked to compose that score,” Humphrey said.

Humphrey went on to relay a story from a third classmate that further attested to his natural musical talents.

“A classmate today was telling about Sammy’s talents even in high school for writing music. As I recall, Sammy’s instrument was the baritone. He attended a District competition and had forgotten his music. He quickly took the clarinet music, transposed it to baritone, and won 2nd Chair at the competition,” Humphrey said.

“Sam just had a presence and came across as a nice person. He was unique, in a rare way, and people just liked him… My family always loved him and my sisters and brother remembered him. He left a lot of good vibes,” Greene said.

“The two Smackover-related Facebook groups alone have had over 200 very kind and caring responses and entries about [Halbrook]. For someone whose tenure in the Smackover School band program ended over a half century ago that is remarkable,” she said.

Those who wish to make a donation to the Smackover Band in Halbrook’s name can do so by filling out a check payable to “SHS Band Activity Account” and mailing it to Lori Willis, business manager of the Smackover-Norphlet School District, at 112 E. 8th Street, Smackover, Ark., 71762.

“The fund is to encourage present and future band students to succeed in music and have a fulfilling life,” Humphrey said.