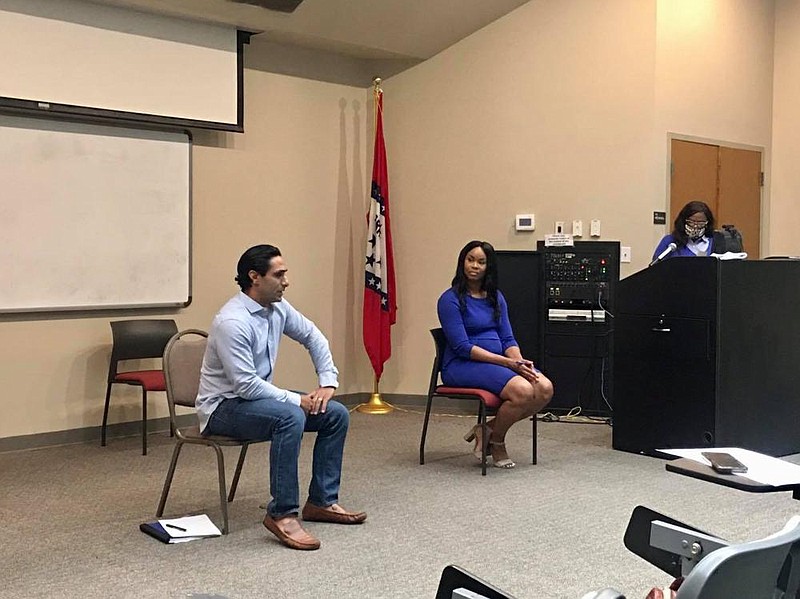 The Union County and El Dorado chapter of the National Association for the Advancement of Colored People (NAACP) hosted a 2020 Political Forum, focused on knowing the voting process and meeting local candidates at the South Arkansas Community College Library. Avo Vartenian, left, and Kensel Green, center, both candidates for El Dorado City Council seats, answered questions about local and national issues during the forum. (Marvin Richards/News-Times)

The Union County and El Dorado chapter of the National Association for the Advancement of Colored People (NAACP) held its 2020 Political Forum on Oct. 8 at the South Arkansas Community College Library. A sizable audience was in attendance and socially distanced throughout the auditorium.

The first half of the forum focused on knowing the voting process, with important voting logistics given by Janelle Williams of the Union County Election Commission. Williams went over the layout of the official general election ballot and explained that Union County residents have numerous voting center locations throughout the county where they may vote. The handout that was given to attendees as they entered listed 19 different voting center locations in Union County.

“It makes it a lot easier time-wise. If there are issues or a long line at one voting place, you can easily go to another voting location,” Williams said.

The audience asked several questions during the question and answer portion of Williams’ presentation. One point of persistent questioning was around the representation of both the Republican and Democratic party during the opening of the absentee ballots.

“So, for example, if there were 10 people counting ballots on any given day, that means there will have to be six Republicans and four Democrats. The party in control will always have two more,” LaQuita Rainey, also of the Union County Election Commission, said.

Both candidates sat in socially distanced chairs at the front of the auditorium and answered questions from moderator Pastor Horace Charles.

“We welcome those that are viewing here in the United States and those around the world,” Charles said, garnering laughter from the audience. “I’ve always wanted to say that. I feel like I’m on CNN.”

He asked several questions to the candidates that ranged from local issues in El Dorado like infrastructure to more national topics like the current racial tensions in America.

One question that pertained to El Dorado and that Union County residents will get to vote on was around whether each candidate would vote in favor of Issue No. 1 on the ballot, an amendment to continue a one-half percent (0.5%) sales and use tax for state highways and bridges, along with county roads and bridges.

Kensel Green: “We have a significant amount of people that are underemployed or are not getting enough hours. We have people who have lost their employment and they don’t know how they’re going to feed their family from one day to the next day. So how can we impose additional taxes when people don’t have employment opportunities or know when they will be able to go back to work? So at this time I don’t think it would be fair to have our citizens pay additional taxes because of the pandemic and the unemployment we have here.”

Avo Vartenian: “I know from being in business we don’t like extra taxes and people in general don’t like extra taxes…It is hard to say if I would be for or against it. If we’re able to provide the jobs needed to people, then we can pay the fair tax that we need to pay. But if we can’t find jobs and direct what’s going on, then there is no sense in people having to pay a tax that they can’t afford to pay.”

Another question Charles asked was in reference to the current debate in El Dorado around the Confederate monument downtown. The News-Times covered protests that took place over the summer centered around the possible removal of the statue. On the ballot for voters is Referred Ordinance No. 1567: An ordinance to preserve the Confederate monument at the Union County Courthouse. Both Green and Vartenian were asked if they are in favor of its removal or preservation and if for its removal, what should replace it? There was some disagreement on this particular issue.

Kensel Green: “I firmly believe that the statue should come down. I believe this because anything that is going to cause division in our community has no place here. If it comes down and needs to be replaced, it should be replaced with someone that is all about unity. I think it could be a question posed to the public and have the public vote on it. It could be a local figure that means unity to our community.”

Avo Vartenian: “I was not here in 1910. It is a statue that is a part of our history. Some people may not like what I’m going to say but I would leave it. On the opposite side of the courthouse I would put another statue that is to everyone’s liking. I usually use things to fuel me or lift me up and say this is not what I want to be. This statue symbolizes what I don’t want to be so leaving it will show us where we were and where we are now. I would use it as fuel to do better and to educate and not go back to a time where things were full of hate.”

Both candidates answered questions for close to an hour and thanked all that came out to have their concerns addressed.

The NAACP will also be hosting another Political Forum on Oct. 15 at the South Ark Library called, “Know the Issues,” at 6 p.m. The event will be partnered with the University of Arkansas Medical Sciences (UAMS) and former Union County Extension Agent Robin Bridges will be the speaker.