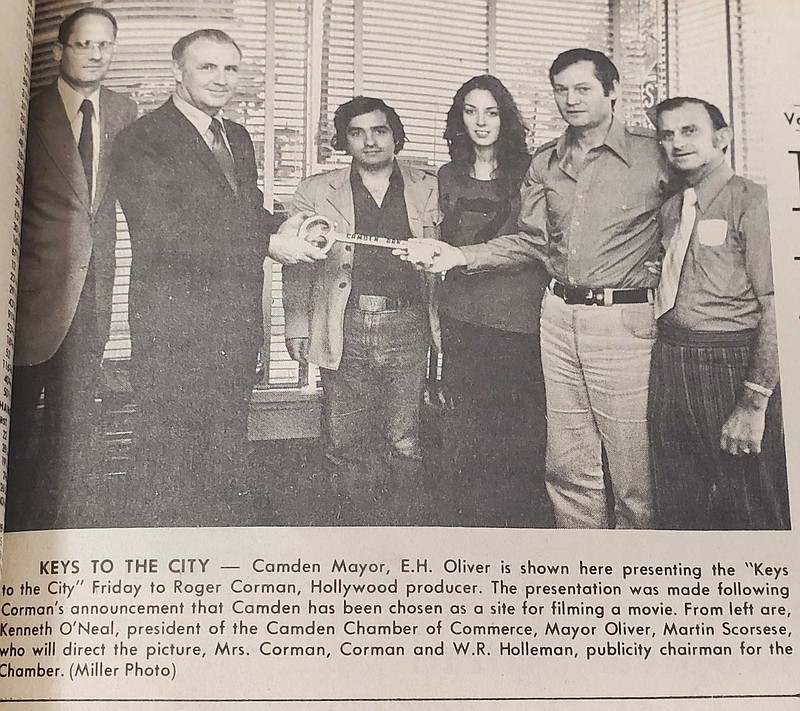 In 1971, legendary film producer Roger Corman and then-unknown director Martin Scorsese came to Camden to shoot a feature film. The Camden News covered the story of “Boxcar Bertha” from it’s inception to its world premier at the Malco Theater.

A 1971 article details the announcement of production.

Do you have a 1935 automobile? A wardrobe from that year? Or better yet, some 1935 National Guard uniforms? No, the above questions have not been taken from a high school test, they are items needed for the production of a motion picture which is scheduled to begin Oct. 25 in Camden.

The appeal for these items and the announcement that Camden has been selected as the location for a Hollywood motion picture was made yesterday at a special called meeting of the Camden Chamber of Commerce Board of Directors by Roger Corman and his wife, Julie, and Martin Scorsese of Hollywood.

The movie will be entitled “Boxcar Bertha” and will be centered around the Reader Railroad. Scenes of railroad yards at Camden will also be used. The Cormans, producers of the film, said it would be similar to “Bonnie and Clyde” and “Bloody Mama” and would employ about 40 people from Hollywood.

Also, local acting clubs will be employed for some minor roles and a local girl will be chosen as a stand in for the film’s star, Barbra Heshey. Other stars will include David Caradine and Berry Primus. Talent from El Dorado and Southern State College of Magnolia will also be employed, the Cormans said. Scorsese will direct the film.

The picture will deal primarily with the founding of unions in the Railroad industry. The producers said Camden was selected because the Reader Railroad is one of the last steam locomotives operating in the U.S. today and also, because railroad unions originated in Arkansas.

Highlights of the film will be a jail break and either a train wreck or a robbery. Filming will begin Oct. 25 and will last until Thanksgiving week. It will take about nine weeks to complete the production.

Scorsese said that in addition to the 1935 automobiles, wardrobes and national guard uniforms, the film would also require other items from the era to make props for scenes in the movie, and asked that people who could provide these items contact the Chamber of Commerce. Present at the meeting were Mayor E.H. Oliver, Kenneth O’Neal, Chamber president; City Manager Robert Herchert; Chamber publicity chairman W.R. Holleman and Harvey Jacobson of Hollywood, assistant to the producer. Corman was presented with the “Key to the City” by Mayor Oliver. The Cormans produced two other memorable films, “St. Valentine’s Day Massacre” and “Bloody Mama”. “Bloody Mama” was filmed at Bull Shoals and Little Rock. The film will probably carry a GP rating.”

Scorsese even spoke at a local civic club.

Director Martin Scorsese, who is in Camden to direct the movie “Boxcar Bertha,” was a guest at the Rotary Club Tuesday, and gave details of the color film, soon to go into production. He was introduced by Ken O’Neal.

Stars of the period movie will be Barbara Hershey and David Carradine. Other parts will be taken by John Carradine, veteran movie star, Barry Primus and Lew Gossett. The film, a Bonnie and Clyde type of picture, will be centered around the Reader Railroad. Several scenes will be shot in Chidester, including a holdup at the Bank of Chidester, an abandoned grocery store made into a soup kitchen of the early 3o’s; and other stores at Chidester. Street scenes in Camden will be centered around the section on Washington St near the Bon Ton Cafe, also Ouachita University, the Ouachita County Jail, and others to be selected.

Scorsese presently is editing the film, and production will begin on Oct. 2, concluding around Thanksgiving. In all probability, the premiere of the picture will be held in Camden, the director said.

Scorsese is a former instructor in Film Production and Criticism at New York University, and has many films to his credit. Props and costumes, and extras to work in the film, will be needed, the director told the group. Music will be furnished by local musicians.”

It is very seldom that the usual Camden resident can have the chance to view a world premiere movie, right in his own town. And it is even more rare for the resident to be able to see himself on the screen. For some it will be a very exciting time and for others they will be completely embarrassed to think that they really look like that on the screen. But overall it will be a unique experience for all as many local residents make their screen debut, in the world premiere of “Boxcar Bertha” as it begins an extended engagement at the Malco Theatre tonight.

‘We have flown in 500 fresh orchids from Hawaii for the premiere and they will be given to the first 500 ladies that come,’ said Richard Fenwick, owner of the Malco Theatre, as he continued to make plans for the showing.

Fenwick said that they were expecting about 1,500 people for the two showings. The first of which is set for 7 p.m. and the second showing will begin at approximately 9 p.m. In the fall of last year, the crew and stars of “Boxcar Bertha” came to Camden and began filming the movie in and around Camden, Chidester and Reader.

Some of the homes used in the Camden area include the Old Rhinehart home, the Thomas Gaughan home and the Dooley Womack home. Some scenes were shot on the streets of downtown Camden and in the Old Post Office Building and the Cottonbeit Hotel. Including the numerous crowd scenes, estimates at the number of local people used includes figures as high as 160 and as low as 75.

Some of the local stars are ‘Chicken”’Holliman, Dot Fenwick, Johnny Harrell, Charlie Green, Harry Lockett, Roosevelt Moore, Judy McKissak, and Mr. and Mrs. Charles Lindsey. Tom Long, president of Reader Railroad with headquarters in Shreveport, also was cast in a role for the movie.

People from Magnolia and E; Dorado also took part in the filming of the movie. The film, which was produced by Roger Corman and directed by Martin Scorsese, will star Barbara Hershey, David Carradine, Barry Primus, Bernie Casey, and John Carradine. It is rated R and according to Fenwick, no one under 17 will be admitted.

If traffic becomes too congested, Fenwick said that the street in front of the theater may have to be roped off so that people will have some standing room outside. Advance tickets for this show are on sale at the box office. They will only be for the two shows tonight. The box office will open each night at 6 o’clock to accommodate the crowds. Fenwick said that the film would be in Camden for at least 8 to 10 days and possibly longer if the crowds merited it.”