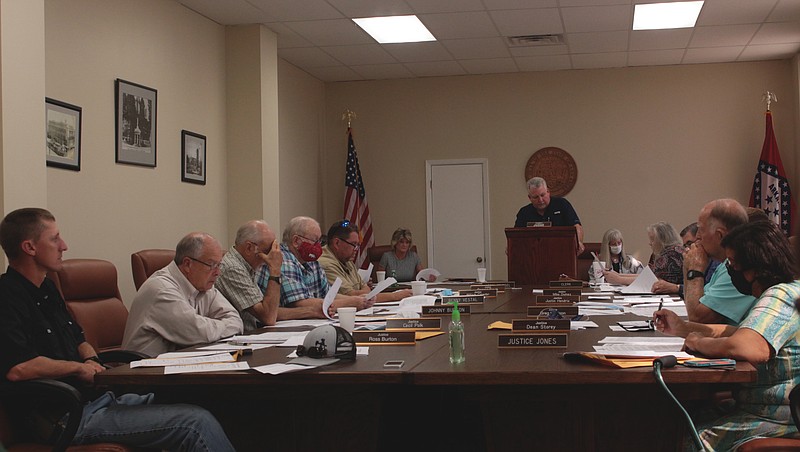 The Union County Quorum Court agreed Thursday to allow Clean Harbors El Dorado, LLC to participate in Arkansas’ Tax-Back Program, which allows companies to have local sales and use taxes refunded if they meet certain stipulations.

The Tax-Back Program is administered through the Arkansas Division of Finance and Administration and to participate, businesses need the endorsement of a local governing body. They must have also made an investment of at least $100,000 and enter into a job creation program with the Arkansas Economic Development Commission.

The Quorum Court unanimously approved such an endorsement for Clean Harbors Environmental Services in September.

“Two separate entities out there doing expansions that need to be involved in the Tax-Back Program,” Union County Judge Mike Loftin explained.

Endorsement for the program was approved unanimously by all Justices of the Peace who were present at the meeting; Ross Burton, District 11 JP, was absent Thursday.

Both projects are focused on sustainability, Roblee said. One, which employees at the company call the “Trommel Screen project,” will reduce the amount of waste generated on-site, and the other will allow Clean Harbors to recycle plastic disposed of there.

“The first project … enhances the recycling equipment we have on-site by allowing us to capture more metal and also reduces the volume of the ash that needs to be sent for disposal at one of our hazardous waste landfills,” Roblee said in an email to the News-Times. “The second project … is going to be recycling waste plastic containers and making new containers that will be utilized on-site. It will reduce the need for new plastic and allow us to instead reuse waste plastic that is currently being disposed.”

Roblee said Clean Harbors is currently working through the approval process for the Tax Back Program with the county government and AEDC.

At the Quorum Court’s October 15 meeting, the Murphy Arts District requested some form of tax relief, but was denied.

MAD Chief Executive Officer Pamela Griffin petitioned the Quorum Court for relief from the nonprofit’s property taxes, which totaled $131,017.17 for 2019. The meeting was held on the due date for property taxes.

“With our efforts to continue to be sustainable at MAD and find ways to balance the budget to be able to afford the programs that we’re providing to the community, I just came to ask you today for some relief in our property tax bill,” Griffin said. “I would love to ask you for the Murphy Arts District to be completely exempt from all property taxes, but I do understand there are reasons why we should pay some property taxes, and would be happy to talk about the exemption of the properties that the city owns.”

According to documents outlining MAD’s tax burden that were provided to the Quorum Court by Griffin, MAD leases several properties owned by the City of El Dorado, including the Amphitheater, Oil Heritage Park and the Playscape. The total tax burden on those properties was $49,046.12 for 2019, according to the documents.

Griffin also provided a copy of the lease agreement between MAD and the city for the Playscape. She said the leases for the other city-owned properties are “basically the exact same.”

The lease agreement stipulates that the lessee, MAD, “shall pay on or before the last day on which payment may be made without penalty or interest, all taxes, assessments or other governmental charges that shall or may during the lease term be imposed on, or arise in connection with the use of, the demised premises or any part thereof.” It notes that the lessee may apply for the “conversion of any special assessment for local improvements in order to cause the same to be payable in installments, and on the conversion … shall be obligated to pay only those installments that may become due during the lease.”

“It’s totally inappropriate to forgive taxes that have been lawfully imposed,” Rogers said. “The Murphy Arts District is self-contained even though it’s a 501c3 … You’d be splitting hairs that you might not be able to stick back together.”

Rogers said that if the county did wish to provide MAD with tax relief, they would need to enter into some sort of formal agreement. District 5 JP Carolyn Jones noted that the county spent several months earlier this year working to get out of managing the El Dorado-Union County Recreation Complex, and that she thinks the Quorum Court would need to spend time considering whether they wanted to enter into such an agreement, which they did not have since taxes were due that day.

District 4 JP Dean Storey also noted that MAD, as all entities in the county do, had the opportunity to request relief from the Union County Equalization Board, which allows local residents to petition for tax relief.

“If you have a complaint about your taxes, you come before them (equalization board) as part of your due process,” Deaton explained in 2009.

Loftin noted that Griffin could petition the Equalization Board for relief on taxes assessed for 2020 next year. Griffin thanked the Quorum Court for their consideration.