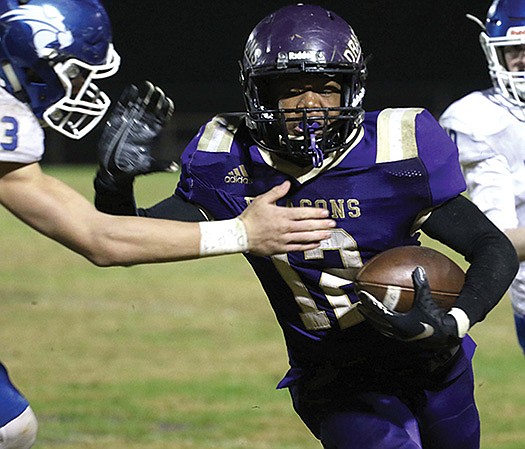 Sianahara Bonnet/News-Times In this file photo, Junction City’s Jamal Johnson looks to break a tackle during the Dragons’ 2019 2A playoff game against Hector at David Carpenter Stadium. Junction City takes on McCrory in the second round of the playoffs on Friday. Game time is set for 7 p.m.

The scoreboard operator at McCrory’s Joe Hart Field may be a little busy this evening.

Tonight, two of 2A’s most prolific offenses collide in the second round of the 2A playoffs, as Junction City visits McCrory.

The Dragons and Jaguars met two years ago in the opening round of the playoffs with Junction City coming away with a 37-8 victory en route to winning the 2A state championship.

The Dragons (7-2), the 8-2A runner-ups, rolled to a 38-0 win over Marked Tree in their playoff opener and have won five straight.

The Jaguars (5-3), the runner-ups in the 3-2A who had played only once in four weeks leading up to the playoffs, cruised to a 52-12 win over Magnet Cove to advance, avenging a loss to the Panthers in the second round of the playoffs last year.

“Our kids came to play,” McCrory coach Chris Kennon said of his team’s performance. “I feel like we’ve gotten better every week. They really showed up ready to play and were ready to play. We scored quick, and then we forced a couple of turnovers and it just really flipped the game quick when we were able to capitalize and score real quick off of those turnovers.”

The Dragons and Jaguars both feature balanced offenses that have made life difficult for opposing defenses.

Junction City has scored 30-plus points in each of its seven wins this year, while McCrory has scored a staggering 152 points during its three-game winning streak.

If there has been a sense of déjà vu around Junction City this week, it’s because the quarterback they will be facing is cut from the same cloth as Marked Tree’s Braylan Honeycutt.

Junior Cason Campbell, who threw for 166 yards and two scores last week and has over 1,500 yards passing and 16 touchdowns on the season, is a threat both with his arm and feet.

“An older, wiser version,” Junction City coach Brad Smith said when asked to compare the quarterbacks. “Very, very talented. He’s got a couple of more years under his belt than the kid from (Marked) Tree did, and it shows. He rarely makes a bad decision, rarely gets hit. Just a very, very good quarterback.”

When asked if he thought seeing a similar quarterback would benefit his defense, Smith said it could help, but is very wary of what they can do.

“It’s never good to see a dual threat quarterback, but I guess if you’re going to look at it that way, they’ve already experienced it once, but those guys, you don’t want to see those guys,” Smith said, adding that he told his defense right after the win over Marked Tree they would be seeing a similar quarterback in the second round of the playoffs. “Almost a carbon copy. Two weeks in a row, in fact we told them Friday night, ‘You’re playing an older, wiser version of what you just played.’”

Kennon has been pleased with Campbell’s production.

“He’s had a good year,” Kennon said. “He throws the ball extremely well. He does a good job of keeping himself alive with his feet. He throws a really good ball and he’s always got his eyes down field to find his receivers.”

“He has exceptionally good hands,” Kennon said of Davis. “He’s not a big kid, but he runs good routes and he does good with the ball once he gets it in his hands. I’ve been very pleased with him.”

Tucker is a threat every time he touches the ball.

“He has the ability to run it or catch it out of the slot,” Kennon said. “He has good open field speed and is really able to make things happen when he gets in space.”

“He’s just kind of our guy,” Kennon said of Reid Kennon. “When we want to throw it, he’s our blocker. When he’s not running the ball, he’s usually blocking for Latreal Neal, our other back who does a really good job that gets about 15 to 20 carries a night too. They just work together and whoever has the hot hand that night. I’ve been very pleased with those guys.”

“They run the football very well,” Smith said. “They have a very, very aiding run game. They do a lot of different things where you can’t just sit on one of them. You get people that you can just basically say, ‘OK, lets take this away, and we don’t have to worry about this.’ But they force you to cover the entire gambit of run plays and formations. It’s really, really tough to get it all in. We spent hours trying to figure them out.”

Junction City’s defense has been outstanding over the last three weeks, allowing just 12 points total, but the Jaguars will be a tough test.

“They’re very, very powerful offensively,” Smith said. “They’re hanging 40, 50 on just about everybody that they play.”

Offensively, the Dragons have been on a roll thanks to a balanced rushing attack.

Johnson and Ivory going over the century mark marked the second time Junction City has had a pair of 100-yard rushers in a game. The first came during the Dragons’ win at Parkers Chapel on Oct. 16.

“That’s part of the big and ugly part,” Smith said. “We’re big enough lineman-wise except for Austin (Mendoza), the 155-, 160-pound guard we’ve got. The rest of them are really big, and Austin is an outstanding blocker. He’s done an unreal job when we had to have him do it. We lost one to an injury, and we had to put him there. We didn’t have to, but he was the next man up, and he’s taken that part of it and just absolutely ran with it.”

But while the Dragons’ ground game continued to produce, the defense delivered its first shutout of the season.

“We did a great job,” Smith said. “We kind of wanted to see what they could do, and the first four or five plays, the film wasn’t a liar. We started bringing our pressure packages. We thought we could win the line of scrimmage and run game, and did not think that they were going to spend a lot of time trying to run it. We wanted to see if we could get there with our front, and we didn’t.

“We had trouble getting there with our front, so we started bringing our pressure stuff, and it worked out pretty good for us.”

One play in particular summed up the Dragons’ effort against the Indians.

In the first quarter, senior Devontay Gilbert chased down a Marked Tree ball carrier and forced a fumble to not only prevent a potential touchdown, but give Junction City the ball back.

The Dragons cashed in moments later when Gabe Richard connected with Corey Dubose on a 29-yard touchdown pass for the first points of the game.

“That’s ‘Tay.’ That’s what makes Devontay one of the best players we have,” Smith said. “I’ve coached for 28 years, and I’ve never met a finer competitor. I didn’t say he was the best player, but he’s definitely the finest competitor that I’ve ever coached.”

Smith said there was one major key to the Dragons’ success.

“We were very, very physical, and that’s what we have to be,” Smith said. “We have to be physical. That’s who we are, and we talked about that after the game. We are what we are. We are big and ugly. We’re just going to live with it and start trying to be as big and as ugly as we can.”

And it’s that size and physicality that has Kennon concerned.

“They’re huge. That’s going to create a problem for us, especially with those guys up front on the O-line and D-line,” Kennon said. “The size of them is also a problem, not being able to move them. That’s a big concern with our kids. We’re going to have to technique well and do some things to give ourselves a chance.

“Obviously, a lot of team speed. They force you to cover some of their receivers one on one, and their kids have great speed out there. If you miss a tackle, they’re going to go the distance.”

If the Jaguars are to advance, Kennon said his team must fare well in the trenches.

For the Dragons to move on, Smith said there were three things his team must do.

“It’s the same. No pre-snap (penalties), know what you’re doing and do your job, don’t drop the football,” Smith said.