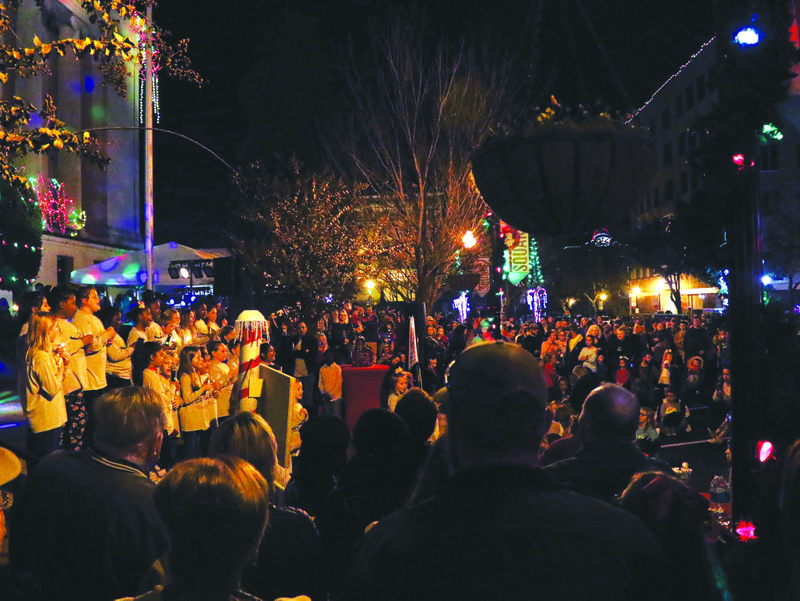 The holiday season will kick off in El Dorado at 5:30 p.m. today with the Downtown Holiday Lighting Ceremony on the east (Jefferson Avenue) side of the Union County Courthouse.

The night will be filled with live entertainment from local dance groups and singers.

COVID-19 health and safety guidelines will be enforced.

The event area will be blocked off between Main and Elm streets and the crowd size will be limited to 330 people as part of an event plan that was approved by the Arkansas Department of Health.

Attendees will be allowed inside the event area on a first come, first served basis, said Beth Brumley, executive director of Main Street El Dorado, which is partnering with the Downtown Business Association and Murphy USA, to present the lighting ceremony and other downtown holiday activities.

“We will have counters to click them out and let them in. We realize it’s a pain but that’s the only way we could figure out how to do it and still be in compliance (with COVID-19 guidelines),” she said. “People who don’t get in can still see and hear what’s going on across the street.”

Brumley said the entertainment roster was also reduced this year to help keep everyone safe, noting that four singing groups and two dance groups have been tapped to perform.

The Salvation Army of El Dorado will hand out free cookies and hot chocolate to the crowd and launch its 2020 Red Kettle Campaign, an annual holiday fundraiser to help families in need.

First responders — law enforcement officers, firefighters and health care workers — will be honored during the ceremony and will conduct the ceremonial “flipping of the switch” to turn on the holiday lights.

Said Brumley, “Just because of the events of that have gone on this year, we thought who better to honor?”

The ceremony will serve as the lead-in for a slate of holiday activities that have been planned for November and December.

• The Holiday Window Decorating Contest: The community will be invited to help pick a winner in a contest that starts on the night of the lighting ceremony and is open to downtown merchants.

The deadline to submit entry forms to MSE was Monday.

Displays must capture the Hometown is Downtown for the Holidays theme. Entries will be judged on visual impact, creativity, overall use of the theme and incorporation of store products.

Prizes will be awarded to first-, second- and third-place winners. A winner will also be selected for the People’s Choice award.

The community will be able to take selfies and vote on their favorite window display by submitting the photos to www.mainstreeteldorado.org or the Main Street El Dorado Facebook page.

Contest winners will be announced at 5:30 p.m. on First Thursday — 4 until 7 p.m., Dec. 3 — on local radio station KIX 103, who will be broadcasting live from downtown El Dorado

Shoppers are encouraged to stroll downtown to see what’s new for the holiday season and take advantage of specials, sales and treats that will be offered at retail stores and restaurants for a safe and enjoyable shopping and dining experience.

• Black Friday: Twelve downtown businesses will open from 8 p.m. until midnight on Thanksgiving on Nov. 26 to offer Black Friday deals. Merchants will throw a pajama party so feel free to wear your PJs!

The national campaign is promoted by American Express to encourage Americans to make a big impact by shopping small and supporting mom-and-pop businesses.

Stores will open at 10 a.m. in downtown El Dorado.

Santa will also arrive on his sleigh and will be available for photos from noon until 4 p.m.