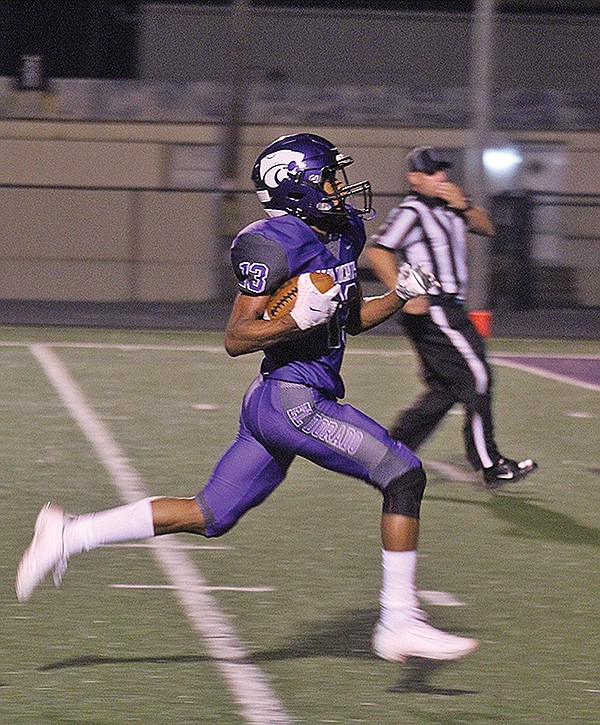 El Dorado will dive into the deep end of the 6A football playoff pool tonight when the Wildcats travel to take on Lake Hamilton.

The Wolves are 9-1 on the season with the lone loss coming two weeks ago against Greenwood (38-28).

El Dorado, which began the season 0-3 followed by two games cancelled, has finished strong with a 5-4 overall record.

“The way we started in non-conference this season, the improvement I’ve seen throughout the year is due to the focus of our kids,” said El Dorado coach Steven Jones.

“Just staying the course and continuing to try to get better and working on the little things every day. Now we’re playing a lot better ball, playing together as a team. We’re excited to compete and have a chance to win a playoff game at Lake Hamilton.”

This week’s matchup could be a tough one for the Wildcats’ defense, facing a physical, ground-oriented Wing-T offense.

The Wolves have averaged 39.1 points per game on the season with their lowest output at 28 points twice. Last week, Lake Hamilton staved off Sheridan 49-36 in the first round of the playoffs.

“They’re very efficient offensively. They don’t do anything fancy. They run a limited amount of plays as far as scheme goes but they’re really good at what they do,” said Jones.

“They’ll throw the football effectively out of that Wing-T. They’ve thrown the ball for some big plays this season.”

Wingback Kendrick Martin could factor into the Wolves’ passing game.

“The biggest thing with those guys is dictating when they throw the ball. If we can get them into third-and-long and into passing situations, we’re going to be a lot more effective on the back end,” said Jones.

“If they have success moving the chains, they’ll start taking shots on early downs and they could really do some damage. We have to do a good job of getting them into longer down and distances and just finishing tackles, flying to the ball and when we get to that ball carrier, we’ve got to get them on the ground.

“There’s film throughout the season that we’ve watched (Woodley) just breaking arm tackles. We’ve got to be physical. We’ve got to wrap up and we have to gang tackle.”

Defensively, Jones said Lake Hamilton has used a 4-2-5 scheme that can transition into an odd-front.

After beating Van Buren 44-7 four weeks ago, the Wolves have surrendered an average of 36 points per game the past three weeks.

“Defensively, they play a 4-2 and they’ll play different coverages behind that. If you show a tight end look, they’ll likely be in that four front. And if you get in that spread situation, they’ll give you an odd front and try to get a dime package on the field,” said Jones.

“Their defensive line is physical. Their tackles play head up on the guard and they try to stay low and cause some disruption.

“Their defensive ends do a good job of keeping things contained. Their linebacker group is probably their best overall group on defense. They have physical corners. They’ll play some man coverage and will mix in some quarters coverage.”

The Wildcats are averaging 49.6 points over the last three games, including a 54-33 win over Siloam Springs last week.

“We’ll take what they give us, try to break tackles in open space and just continue to be explosive,” said Jones.

“They’ve been very good in the kicking game. They do a good job in kickoff coverage. They’ll pen it down there pretty deep,” Jones said. “I don’t know if they’ll kick deep to us or not. We’ll see. They’ve been effective, for the most part, in the punt game.

“They’re a very well coached team that doesn’t make mistakes. Special teams is something they emphasize so we’ll have to be sharp.”

Lake Hamilton is a former long-time conference foe for the Wildcats, most of whom have made the trek to Pearcy several times. Jones thinks his underdog Cats will be prepared for the challenge.