State seeking contributions for Bates, Cash statues to be placed in DC 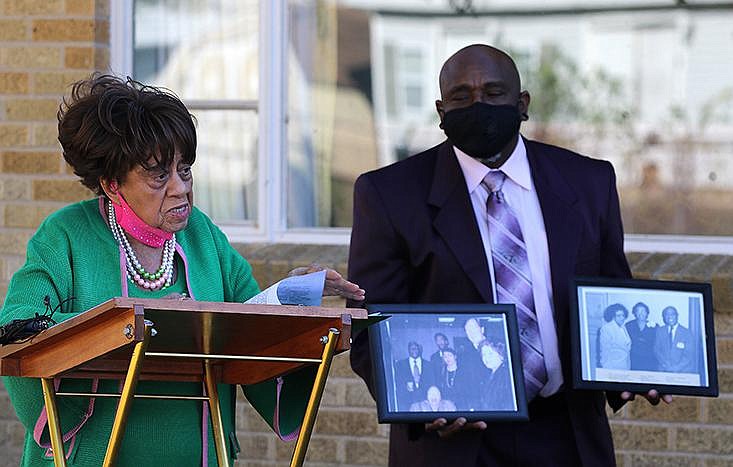 The state has raised more than half of the money it needs to replace the two statues representing Arkansas in the U.S. Capitol and is mounting a public push to raise the rest.

Gov. Asa Hutchinson said Thursday the state has raised $510,000, more than half of the $1 million fundraising goal to cover the cost of designing, completing, transporting and displaying statues of civil rights leader Daisy Gatson Bates and country music icon Johnny Cash in the U.S. Capitol. The statues would replace the two century-old statues currently representing Arkansas.

In 2019, the Arkansas Legislature passed Act 1068, which ordered the replacement of Arkansas’ current statues in the U.S. Capitol, which commemorate the late attorney Uriah Rose, placed in 1917, and the late U.S. Sen. and Gov. James P. Clarke, placed in 1921.

“In the last hundred years, Arkansas has changed as a state,” Hutchinson said, “but the changes that we have seen as a state are not reflected in our nation’s Capitol, and our visitors do not get to see that change in our representation.”

The legislation requires Arkansas’ secretary of state to receive funds for the replacement effort. The funds can include appropriations, private gifts, grants and donations from individuals and organizations. Donations are to be made to the Foundation for Arkansas Heritage and History, a nonprofit that supports the Division of Arkansas Heritage.

The foundation’s director is Stacy Hurst, secretary of the state’s Department of Parks, Heritage and Tourism. Of the $510,000 raised, Hurst said the foundation has $180,000 on hand. The rest are firm commitments that she expects to receive “very soon” after paperwork is completed, she said.

Little Rock contributed $45,000, which was paid in a legal settlement tied to the removal of a Confederate statue from the grounds of MacArthur Park. A condition of a 2017 grant the city received from the Arkansas Historic Preservation Program to restore the facade of the MacArthur Museum of Arkansas Military History was a state easement on the land where the monument, known as “Memorial to Company A, Capitol Guards,” stood.

In 1864, Congress passed a law inviting each state to submit up to two bronze and marble statues to be placed in what is known as National Statuary Hall. As the number of statues grew, the statues spread to other areas of the U.S. Capitol.

Both likenesses are going where Arkansas’ statues currently stand. Shane Broadway, chair of the National Statuary Hall steering committee, said the placement of Bates’ statue was a sensitive topic of discussion that involved input from the Daisy Bates House Museum Foundation in Little Rock.

Broadway joked that Bates’ placement could serve to stick it to Davis, who was president of the Confederate States during the Civil War.

Charles King, president of the Daisy Bates House Museum Foundation, said the group was proud to see the state work toward commemorating Bates and Cash.

“The gifts that we ask for today will correctly enshrine the work of two great Americans,” King said.

The artist selection process is expected to take several months. Under a schedule outlined in the secretary of state’s request for qualifications, the statues must be completed and ready for shipment to Washington, D.C., by Dec. 31, 2021, but that deadline could be extended.

Hutchinson, a Republican, said he is committed to having both statues installed before he leaves office in January 2023.