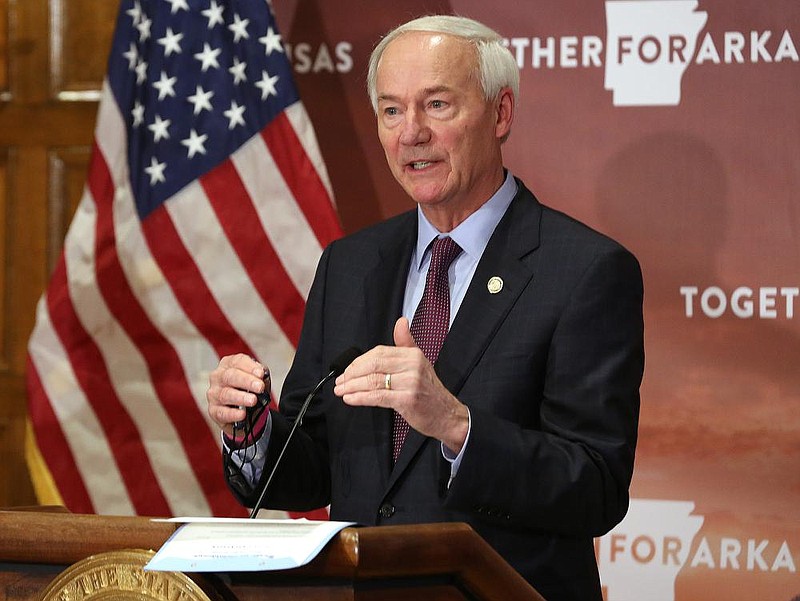 Gov. Asa Hutchinson answers a question during a press conference on Friday, Nov. 13, at the state Capitol in Little Rock. (Arkansas Democrat-Gazette/Thomas Metthe)

The Arkansas Department of Health reported 18 new COVID-19 cases in Union County Friday, bringing the cumulative number of cases identified locally to 1,320. The cases in the county Friday included 1,153 confirmed cases, up 17 from Thursday, and 167 probable cases, up one from Thursday.

Active cases in Union County reached 87 on Friday, equal to their highest level yet reported on Aug. 29 and 30. They were up by four cases since Thursday and represented 6.6% of all the cases identified locally. The active cases in the county Friday included 68 confirmed cases and 19 probable cases.

Governor Asa Hutchinson announced Friday the formation of a COVID-19 Winter Task Force, which he will chair, with Arkansas Surgeon General Dr. Greg Bledsoe acting as Vice-Chair. Among the members of the task force are public health experts from both the ADH and other institutions, as well as hospital administrators, including Medical of South Arkansas Chief Executive Officer Scott Street.

"It is a great honor to be appointed to the Governor’s COVID-19 Winter Task Force. I look forward to serving as a voice for residents in south Arkansas and for health care providers across the state. I continue to urge residents of south Arkansas to continue their due diligence in the fight against COVID-19 and to continue to take steps to protect yourselves and your families," Street said.

“This is the result of the fact that the winter months pose particular challenges for us. We have our hospitalization rate that is going up, our caseloads that are going up … and the critical link is our hospitals,” Hutchinson said.

The governor said the ADH will still be the lead agency handling COVID-19 and will continue to issue and implement public health guidance; the task force’s job will be to provide recommendations on the subjects he outlined Friday. Hutchinson added that the task force will consider the time the state has to act in making considerations for further public health guidance.

“This is a fast moving pandemic. We’ve got to act fast,” Hutchinson said. “We’re going to be taking action periodically as needed as a result of where we are in the pandemic and that is the work of this task force.”

Hutchinson highlighted the high rate of hospitalizations the state has seen in recent weeks. On Friday, 826 Arkansans were hospitalized as a result of the virus, an increase of 21 from Thursday; last Friday, Nov. 6, there were 633 Arkansans hospitalized due to the virus.

Bledsoe, who several weeks ago was diagnosed with COVID-19 himself, said that in total, seven people in his family contracted the virus. He noted the different course the virus took in different members of his family; while he and his wife and mother all had moderate cases, his father was hospitalized for 10 days and treated with IV medicines.

“If you have a one in seven rate in families of people ending up in the hospital, you can see where resources would be a problem,” he said. “This is a virus that is very difficult to contain and it’s very difficult to predict what’s going to happen.”

Hutchinson also announced Friday that the state would mobilize 30 Arkansas National Guard members to assist the ADH in case investigation, as the department is no longer able to keep up with the high volume of COVID-19 cases. Additionally, he said the state would launch a $1.6 million marketing campaign to educate state residents about the virus for the fall and winter.

ADH Secretary Dr. Jose Romero said it is important to impress upon Arkansans the individual responsibility they bear in preventing the spread of the virus.

“The important issue here is that the public can take care of it,” Romero said. “These masks protect not only others, but protect us — there’s data to suggest that. We are not bringing this under control because people are not adhering to the three Ws; we need them to wash their hands, wear their masks and watch their distances. If we do that, we can bring this under control.”

“It is not too late to stop this, but everyone must realize the importance of this,” he added.

In the Southwest Public Health Region of Arkansas, where Union County is located, 128 people were hospitalized due to the virus Friday, including 43 in intensive care units and 17 on ventilator support. Hutchinson shared a graph during his press conference showing that on Wednesday, when 24 people in the region were on ventilator support, 60% of the region’s ventilators in use were being used by COVID patients.

“The rest of the vents are being used for elective surgeries, the routine health needs that all of our patients have, and you do not want those to be sacrificed because that’s going to put us all in poor health as we go on,” Hutchinson said. “Hospitals are having to manage both the COVID caseload as well as the regular caseload, and we don’t want either one to suffer. We’ve got to manage between those, and it takes a high level of coordination between all of the hospitals to accomplish that.”

The ADH reported 157 new negative test results returned from Union County Friday, indicating a one-day local positivity rate of 10.3% based on the number of new cases and results reported. In all, 14,496 COVID-19 test results have returned from Union County, including 13,176 negatives, indicating an overall local positivity rate of 9.1%.

The deaths of four Arkansans that resulted from COVID-19 were reported Friday, bringing the state’s death toll to 2,148, indicating a state COVID mortality rate of 1.6%. Of the 826 Arkansans hospitalized due to the virus Friday, 292 were in ICUs and 114 were on ventilator support.