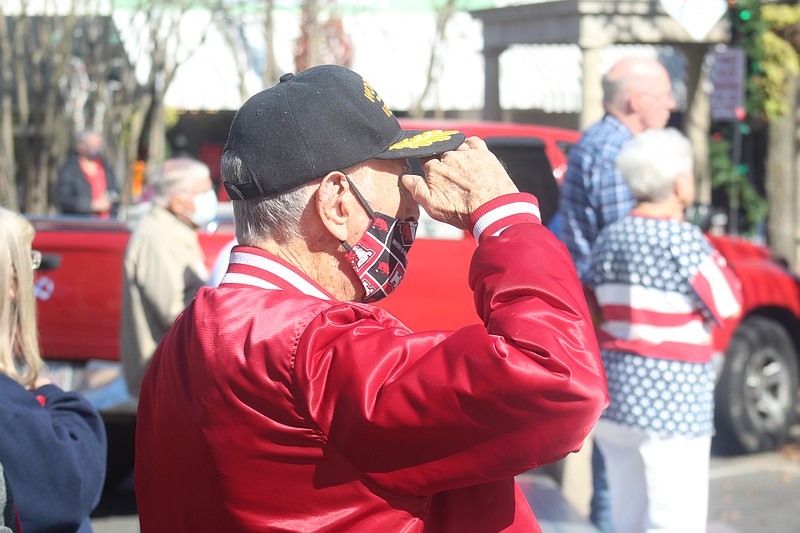 Veterans from across Union County gathered at the courthouse on Wednesday to enjoy the American Legion’s annual Veterans Day program and ceremony.

The ceremony began with the customary bell ringing. This was followed by the pledge of allegiance along with the national anthem.

The first speaker was the VFW Post 2413 commander James Machen, a veteran of the U.S. Army.

“We thank all veterans for their service. Whether in a time of war or peace, they all sacrificed in some way or another. Not only did they sacrifice, their families sacrificed as well, so let’s pay attention to our loved ones on Veterans Day as well,” Machen said.

Machen also announced that the VFW is currently selling raffle tickets for a prize drawing of two guns.

“We’re trying to make do in a COVID environment where we don’t have a lot of money coming in,” he said.

The drawing will be held on Dec. 18, according to Machen, and the VFW is planning to serve chili at their post as well. The event will begin at 6 p.m. Anyone interested in buying a $10 ticket can contact a VFW member or VFW quartermaster George Fennell at (870)-866-0539.

“I have 10 or 12 relatives who have been in the military and paid a price of some sort in battle. On this day, we give them the honor they all deserve… Those who have died in battle and POWs also deserve a big thank-you,” Brown said.

“When thinking about what I wanted to speak to you about today, one word kept popping into my head over and over again - challenge. Last year we came out here, and just a year later things have changed here in south Arkansas and across America. Look at the COVID-19 pandemic - it has devastated lives, the economy, our way of life. We look across the country and see civil and other unrest, and we’ve had a pretty contentious election,” Garner said.

Garner said the people of his district give him hope that the country will overcome its current challenges.

“When I was running my campaign, my motto was ‘Proven Leadership.’ Leadership doesn’t get tested when things are going great, it gets tested when you have a problem. As we used to say in the military, everybody has a plan until that first bullet goes off. But during this challenging time, I haven’t been discouraged. When I look out at the men and women here today, I feel hope. Our country has been through many great challenges… and we’ve come out of it every single time stronger and better than we were before,” Garner said.

Garner went on to relate a story from his time in Afghanistan in which he came under fire while driving an ATV.

“The Taliban had set up an ambush above us on both sides and were raining down fire on us… It was a hairy, bad situation. We had a guy get hit; fortunately he made it. We faced a challenge and we responded… We’re in a challenging time right now, but I see men and women who are responding to the challenge; people who are getting on Facebook and making masks for friends and family, who are making sure their neighbors have the food they need… We’re going to face additional challenges going forward, but I want you to remember that there is more that binds us together than tears us apart. When I was underneath that four-wheeler, I didn’t care if the guy next to me was Black, white or any other color or religion. I cared that they were American and there to help each other. There’s a lot more that we have in common, and we’re all blessed to live in a country that honors its veterans,” Garner said.

The ceremony ended with a playing of “Taps.”