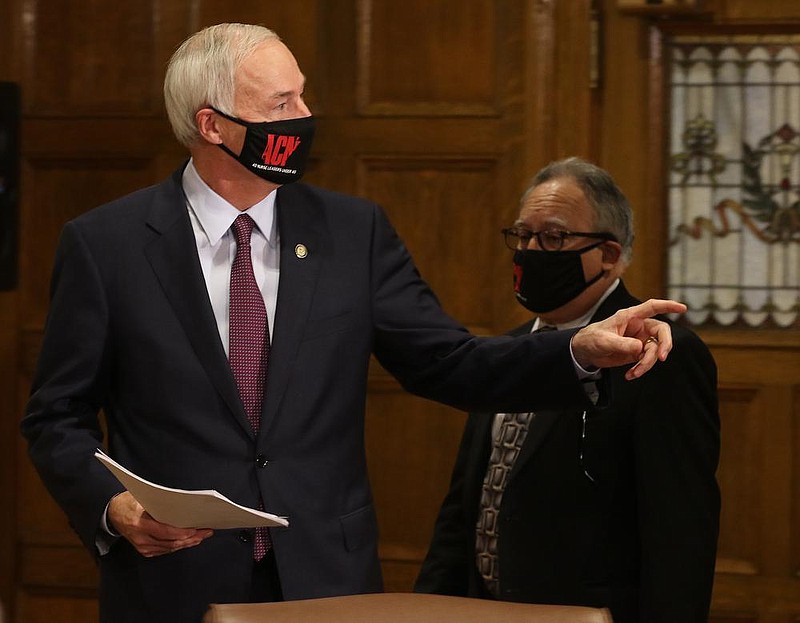 The Arkansas Department of Health reported 16 new COVID-19 cases in Union County Tuesday, bringing the cumulative total of cases identified locally to 1,277. The cases in the county Tuesday included 1,126 confirmed cases, up 16 from Monday, and 151 probable cases.

Twelve new recoveries were reported Tuesday, making 1,152 Union County residents considered recovered from the virus. There were 72 active cases of the virus in the county Tuesday, up four from Monday and representing 5.6% of all the cases identified locally. The active cases in the county Tuesday included 64 confirmed cases and eight probable cases.

No new local deaths attributable to COVID-19 were reported Tuesday. Fifty-three Union County residents have died as a result of the virus.

Union County, as well as the Southwest Public Health Region in which it is located, were mentioned several times during Governor Asa Hutchinson’s weekly update on COVID-19 Tuesday. Hutchinson compared Union County’s 14-day percent positivity rate of 11.1% to Pulaski County’s rate of 7.2%.

“If you look at this, it shows you what you’ve got to worry about in your community in terms of the spread,” Hutchinson said.

There were 809 people hospitalized in the Southwest Public Health Region Tuesday, including 50 in intensive care units and 25 on ventilator support. The Southwest region’s COVID-19 case growth rate over the past week increased to 8.3% from 7.4% at the same time last week, showing that the number of cases in the region was the second-fastest growing in the state after the Northeast region. The Southwest region was again ahead of the Southeast region in the seven-day rolling average of new cases, as well.

“There’s not any — very little good news in today’s numbers,” Hutchinson said Tuesday. “That’s probably not a surprise as we see what’s happening nationally; and also, it’s challenging to know what this means for the future. So, just setting the stage that the numbers aren’t good, the trend is not good, and we have a lot of work to do here in Arkansas and across the nation.”

“We’re in for a very challenging time,” he added.

Hutchinson invited two religious leaders, Dr. Sonny Tucker, executive director of the Arkansas State Baptist Convention, and Father Eric Pohlmeier, pastor of Christ the King Catholic Church, to help him announce new guidelines for places of worship. The guidelines do not include any restrictions; they do, however, ask that all congregants wear masks and socially distance from any non-family members by six feet, at all times in the church.

“It’s said that the journey of 1,000 miles begins with a single step. Our churches began this 1,000 mile pandemic journey with preparation, intensity and focus. Months and months into this journey, we’ve surpassed the 1,000 mile mark and we’re weary and fatigued and tired,” Tucker said. “I love Gov. Hutchinson’s philosophy on our economic recovery and on our faith organizations: engage, but follow the safety guidelines and precautions. … As churches and faith organizations, we really respond to two driving, motivating factors: love for God and love for people. When we engage in worship activities and religious activities safely, we show our great respect and love for God by showing respect for the people He’s given us to serve.”

“It is about loving God and loving other people. This is a practice we can put into place when we worship, because it’s not just a question of ‘do I need to wear a mask or not?’ but in the practice of charity, in the practice of justice, we need to be conscious of other people, other people who might be more vulnerable than we are,” he said. “It is an opportunity in a concrete way to practice those aspects of our faith that we profess, the belief that shapes the way we go about living our lives.”

Polhmeier added that he knows it is important to many to come together in order to be strengthened by their faith during difficult times such as the world is facing as the pandemic continues.

“Times like these, times like crisis, are times when we want to rely on our faith even more, so the opportunity to worship is of supreme importance to us. Not only does it allow us to come together as a community of faith, to find solidarity in our shared struggle in the face of this pandemic, but also, and primarily, it gives us the chance to be strengthened by God himself — by the God who has seen every crisis before, who understands the difficulties that we feel in our hearts and God who wants to reassure,” he said. “Our worship strengthens us by our presence with God; it also reminds us of our shared difficulty that we work together to try to overcome.”

ADH Secretary Dr. Jose Romero said additional guidance on the upcoming holidays will also be posted to the department’s website soon. He attributed the recent case growth in large part to Halloween parties and activities.

“This is a harbinger. This is something that we may see even more significantly as we enter into the Thanksgiving and the Christmas and New Year holidays,” Romero said.

Romero said there were 20 Arkansas counties with over 20 new cases Tuesday, including three that saw over 100 new cases. He stated outright that that as the state’s Secretary of Health, he does not recommend that families gather with their loved ones who live in congregate living facilities for the holidays.

“I am going to come forward today and state that I strongly discourage that persons living in assisted living, living in congregate settings, be taken away from those congregate settings and have Thanksgiving or holidays with their families. Roughly speaking, there is a 30% increased chance that you could become infected and die,” Romero said. “We have seen an increase in the number of deaths since the liberalization of visitor restrictions in nursing homes, and we are concerned this is going to continue so at this time, I, as Secretary of Health, am not recommending this be done for the upcoming holidays.”

Romero also said that if the basic tenets of stopping the spread of the virus — wearing a mask, socially distancing and washing one’s hands — are not adhered to, he expects to see another spike in cases after Thanksgiving.

He did note that several vaccines are currently in Phase III trials, which involve testing the vaccine on thousands of people to determine its efficacy; the vaccine must still undergo testing and approval processes from the Federal Drug Administration (FDA) after Phase III trials. He noted one potential vaccine from Pfizer looks promising, with a recent clinical trial showing a 90% efficacy rate.

Romero said the state is also expecting to receive 900 doses of a monoclonal antibody treatment for COVID-19 soon, for patients with mild or moderate cases of the virus to be used on an out-patient basis. Former New Jersey Governor Chris Christie received such a treatment when he was hospitalized for COVID-19, according to The Washington Post.

The number of Arkansans considered recovered from the virus grew by 1,034 to reach 109,235 Tuesday. Active cases again reached a new high Tuesday, growing by 386 to reach 12,874, which represented 10.4% of all the cases in the state. The active cases in Arkansas on Tuesday included 10,105 confirmed cases and 2,769 probable cases.

The ADH reported the deaths of four Arkansans that resulted from COVID-19 Tuesday, bringing the state’s death toll to 2,112, indicating a state COVID mortality rate of 1.7%.

“Obviously, that reduced number is a silver lining, but we all know that’s a lagging indicator and whenever you have high numbers of hospitalization, we also know that’s probably a temporary respite and those numbers are likely to go up, regretfully,” Hutchinson said.

There were 809 Arkansans hospitalized due to the virus Tuesday, including 310 in ICUs and 126 on ventilator support. Romero said the ADH is keeping a close eye on the state’s supply of ventilators as the number of people requiring them rises.

“I’ve communicated with some of our hospitals. They’re making adjustments, and I applaud them,” Hutchinson said. “And let me just pause and say how much I appreciate our doctors, our hospital workers that are doing an extraordinary job over a long period of time… We’ve got to keep them in mind as we try to control the virus in our own lives and in our own environments.”

Hutchinson said 8,962 COVID-19 test results had returned to the ADH between Monday and Tuesday, indicating a one-day positivity rate for the state of 15.9% based on the number of new cases and results reported. Since the state began testing for COVID-19, 1,526,495 results have returned to the ADH, including 1,400,463 negatives, indicating an overall positivity rate for the state of 8.1%.