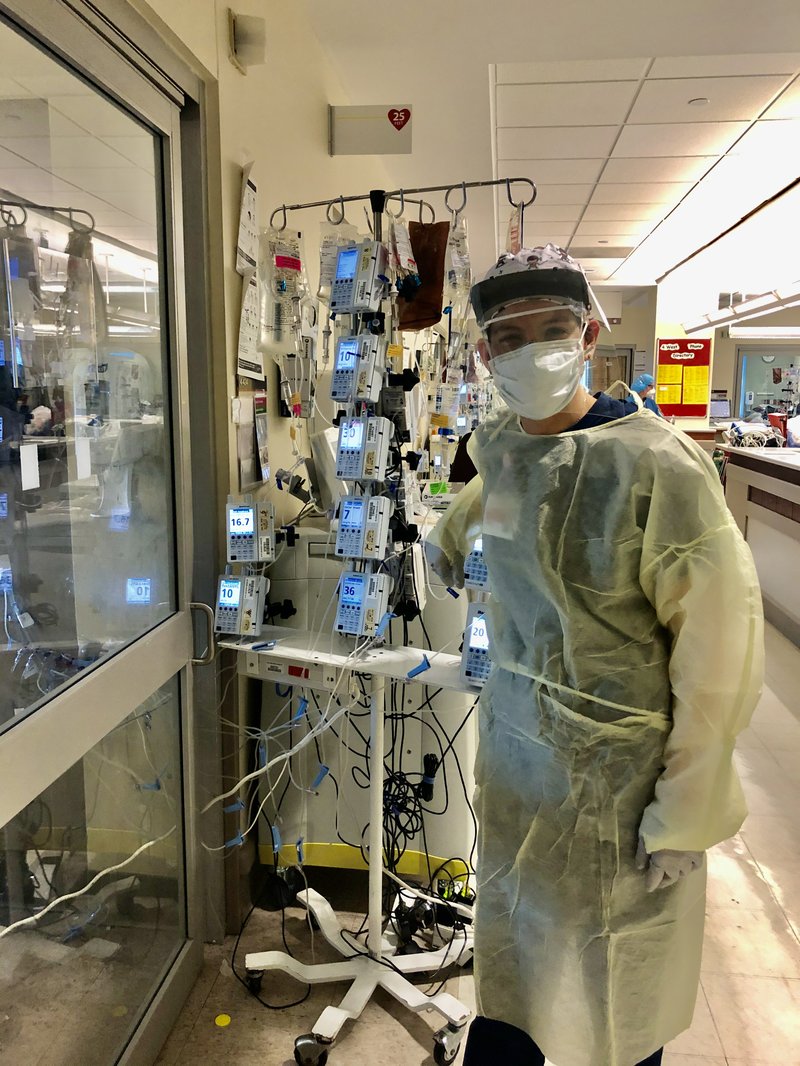 Teresa Ritchie, a Junction City High School alum, is working as an Intensive Care Unit nurse at New York Presbyterian/Weill Cornell Medical Center, where she is on the frontlines of the COVID-19 pandemic. New York City has been hit harder than any other United States city by the pandemic.

Even as a high school student at Junction City, Teresa Ritchie never chose the easy option. In hopes of earning a softball scholarship, she moved to Colorado to play fastpitch in the Fall and then moved back to Junction City to play slow-pitch in the Spring.

Ritchie earned a scholarship to Henderson State but soon transferred to Oklahoma State. The competition was much tougher in Stillwater.

After graduating in 2003 with a health promotion degree, Ritchie decided she wanted to follow in her mother’s footsteps and went to Oklahoma City University for her nursing degree in 2009.

After working in intensive care at Stillwater Medical Center, she moved to New York City and went to work at New York Presbyterian/Weill Cornell Medical Center as an ICU nurse in the float pool.

But even a woman who constantly sought out challenges could not have predicted what was next.

The COVID-19 pandemic hit the world hard, and in few places harder than New York City.

Ritchie was transferred to COVID care in March. In the early stages, she worked with patients who came in with a 20 to 25 percent survival rate.

“What’s hard for me right now to work through is there is a level of compartmentalization in health care as a whole. To do your job, you do have to put your emotions to the side. It was different,” she said. “This virus, this pandemic, from a nursing standpoint, was emotionally very different. We don’t know who they are. We took away that backstory of who they are. As the surge hit, the hospital was spread so thin. The number of ICU nurses was very limited. For 20 beds, we would get six ICU nurses. That puts one ICU nurse to three, sometimes four highly acute patients. It’s unheard of. Your sensory overload was so heightened for so long. You just become a task rabbit. You hop around from one task to another. You do compartmentalize it. You can’t function if you don’t.”

For Ritchie, dealing with death became a heavy burden to shoulder, especially on a daily basis.

“One of my patients, unfortunately, is passing away. You have to go through the traumatic experience of being in there with that patient and having their loved one on a speaker phone and listening to that conversation, professing their undying love for that person in the bed,” she said. “You’re in there absorbing it all. You’re sitting there crying. You’re crying through your eye shields. You’re crying through your N-95 mask. That conversation lasts for 30-plus minutes and then you have to pick up because now you have to go to another patient’s room. Compartmentalizing? Yeah. And it resurfaces sometimes in unexpected ways. When it really hits you, especially now when things are slowing down, and you’re left alone. Now, I’m having my off days and you get to sit, and you have these flashbacks of everything that’s happened. It becomes very emotionally overwhelming. I think that’s going to be the hardest part for people to filter through from a health care standpoint. At least for me, I think so.”

Ritchie fell in love with her first job after college. After receiving her Bachelor of Science in Nursing, she worked in the ICU in Stillwater.

It’s a stressful job. Of course, Ritchie would like it.

“I like that it’s dynamic. I like that it takes a little bit more brain matter. You have to think quickly. It’s just a higher level. Something drew me to that. I wanted that level of expertise. It changes so rapidly. I just knew that was a better fit for me,” said Ritchie, who said it compares a little bit to being an athlete.

“I think so. You definitely have to think on your toes a little bit and handle pressure. You have a sense of how you can handle pressure and how you can control your emotions under pressure. As an athlete, you learn how to do that. When you go into critical care and things happen, I mean it’s different. You’re dealing with another human being and their well being and their outcome. Calm myself but work fast and work efficiently. I think athletics kind of built that foundation.”

But does it offer the same adrenalin rush as competition at its highest level?

“There’s definitely an adrenalin surge, without a doubt,” she said. “There’s a different level of adrenalin in sports than in a hospital setting because so much more is riding on it. So much more is riding on your ability to think quickly in an emergency situation with another person than it is on a ball field. But it definitely sends the same reactions through your body. Your heart rate goes up. Your pulse is beating fast. You can feel everything in your body at a heightened level. You do have to calm yourself down a little bit. I don’t know if the adrenalin rush is what I like. I like the critical aspect of it. I like the critical thinking of my job. The more you get used to it, the better off you’re going to be.”

Editor’s note: This is the first in a three-part series about Teresa Ritchie’s experience as a nurse in New York City during the ongoing COVID-19 pandemic. See tomorrow’s edition for more.