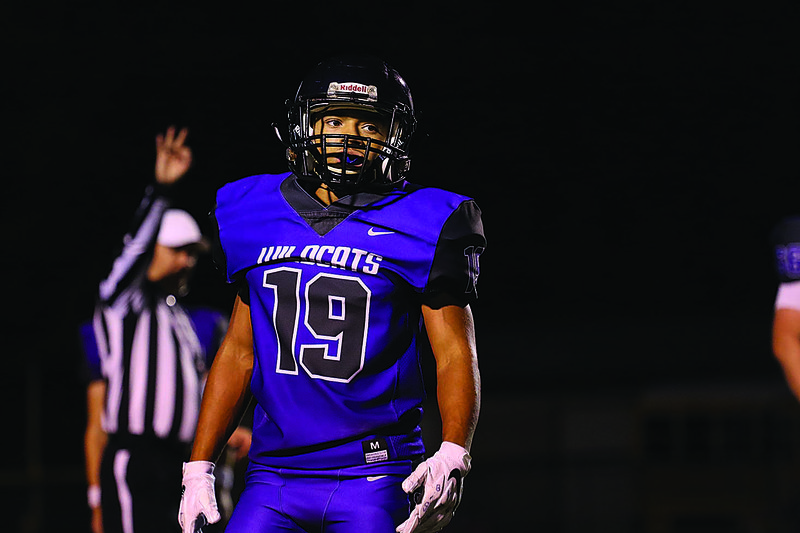 El Dorado's Devunte Kidd walks to the line of scrimmage in action last season at Memorial Stadium. Kidd has accepted a scholarship to run track at Southern Arkansas University. - Photo by Siandhara Bonnet

What turned out to be a frustrated senior year ended with a silver lining for El Dorado’s Devunte Kidd. The two-sport standout received an opportunity to continue his athletic career, accepting a scholarship to run track at Southern Arkansas University.

Kidd was the two-time 5A state long jump champion. He did not get to defend that crown this season due to the coronavirus pandemic. He entered this year’s track season as one of the top sprinters in the state as well.

“It’s a blessing,” Kidd said of SAU’s scholarship offer. “Most people don’t get to carry on with their dreams.”

The receiver still finished with 33 receptions for 482 yards and three touchdowns with 12 rushes for 99 yards.

The speedster was asked if he would consider playing football for the Muleriders.

“Just track,” he answered, “my knees are too bad.”

The football injury and the cancelled track-and-field season made for a very frustrating senior year for Kidd, who had set high goals for himself.

“It was very frustrating. I didn’t get to do nothing really, just sit back and watch and waited, thinking I was going to come back,” he said.

“Devunte has worked extremely hard and improved a lot especially with his work ethics,” said El Dorado assistant track coach Kenneth Cunningham. “He came off an injury that ended his senior football season and worked harder than ever before. He was set, in my opinion, to win conference and state in the long jump and make a serious push for the conference crown in the 100.”

Cunningham said he felt Kidd could’ve had a career season on the track.

“Devunte started to understand the technical aspect of sprinting. That sprinting is 70 percent technique and 30 percent ability. I was really looking for him to have a historic senior season,” said Cunningham. “Unfortunately, it was cut short because of the current pandemic. Now he moves onto college and I couldn't be prouder of him. I know that he will excel athletically while at SAU but my highest expectation of him is get his degree. That will be the crowning achievement of an otherwise illustrious career.”

Kidd said he’s thankful for the opportunity to compete at SAU.

“Really, a full ride, I couldn’t throw that away,” he said. “The El Dorado Promise, helping with it. That’s what makes it a full ride.

“I just want to thank everybody who was there for me.”