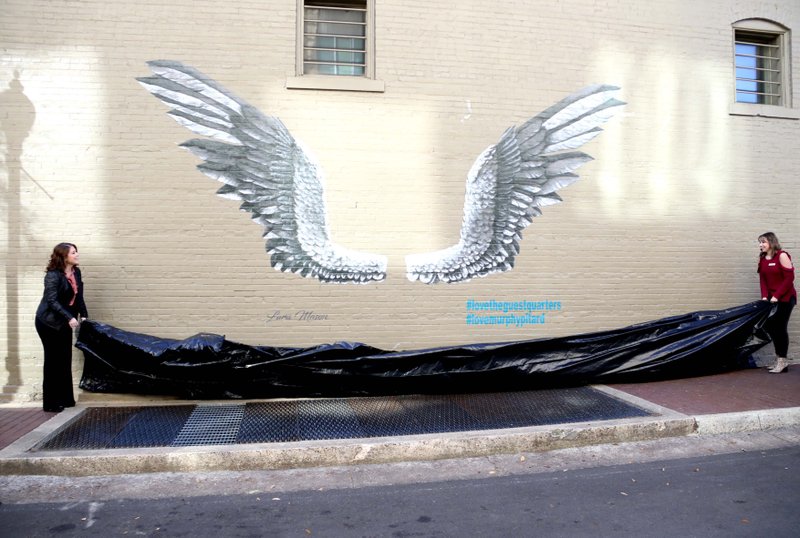 The coronavirus (COVID-19) pandemic may have slowed downtown activities but efforts are still under way to plan and implement ideas for public art projects in the city’s Central Business District.

The effort involves several groups, including Main Street El Dorado, who is spearheading the proposed projects; the El Dorado Historic District Commission; and a committee that was formed late last year to propose and help flesh out ideas for public art projects in downtown El Dorado.

Crosswalk art and murals have emerged as the leading ideas.

Potential locations for crosswalk art are the intersections of Elm Street and Jefferson Avenue and Elm and Washington Avenue.

Beth Brumley, executive director of Main Street, said the areas were considered for safety reasons and because they are sites where Main Street typically holds its outdoor events.

Sites that are being considered for new murals are a brick wall that adjoins Hill’s Recreation Parlor, 203 E. Cedar, and a brick wall that divides north wall of the Masonic Temple and the Mahony parking lot in the 100 block of South Washington.

Both walls were formerly interior walls in buildings that are no longer standing.

The wall on Cedar Street was the interior, east wall of the former Mast Restaurant, which was destroyed in a fire in 2003.

The brick wall on South Washington was the interior, south wall of the building that was historically known as the McFarland Oil building and housed Sterling Department Store, a once popular five-and-dime chain.

The building was razed several years ago.

During a regular EHDC meeting May 14, Elizabeth Eggleston, executive director of the commission and a member of the public art committee, said the committee, which last met in February, has also discussed the west, exterior wall of the building that formerly housed Larry’s Rexall Pharmacy at 203 E. Elm as a potential site for a mural.

The EHDC is considering design guidelines for murals within the city’s commercial historic district, which covers a large swath of downtown El Dorado, including the areas that are under consideration for the public art projects.

Commissioners work to ensure that exterior projects within the district fit design guidelines and standards that are intended to protect the architectural and historical integrity of the commercial historic district.

Brumley noted that Main Street and the EHDC both fall under the umbrella of the Arkansas Department of Parks, Heritage and Tourism.

“(Eggleston) was going to try to lead the way to get some (design) guidelines in place for murals so that when we do it, the (Certificate of Appropriateness) process would be a lot easier,” Brumley said.

Eggleston said that some conceptual designs have been drafted for the crosswalk art and distributed to the committee.

Mike Means, a member of the committee, drafted the designs, Brumley said.

“Mike did three or four (designs) for us. We were going to have him do one first to see if, material-wise, the paint would withstand traffic,” she continued. “It will also give us an idea how long it’s going to take to complete and how much it’s going to cost. We have a couple of renderings but the committee hasn’t picked one yet.”

The project will also be opened up to applications from other, local artists to submit ideas later, Brumley said.

Main Street is applying for an AARP Community Challenge grant, which provides small grants to fund “quick-action” projects that can help communities become more livable for people of all ages.

If approved, the grant, would applied toward the crosswalk art project, Brumley said.

Crosswalk art is a popular trend in urban landscape design and has been incorporated into traffic/pedestrian safety measures in cities across the country.